Denver-based Whiting Petroleum Corp. said it plans to deploy a fifth drilling rig in the Williston Basin and is moving forward with a possible sale of some assets in the Denver-Julesburg (DJ) Basin in Colorado. 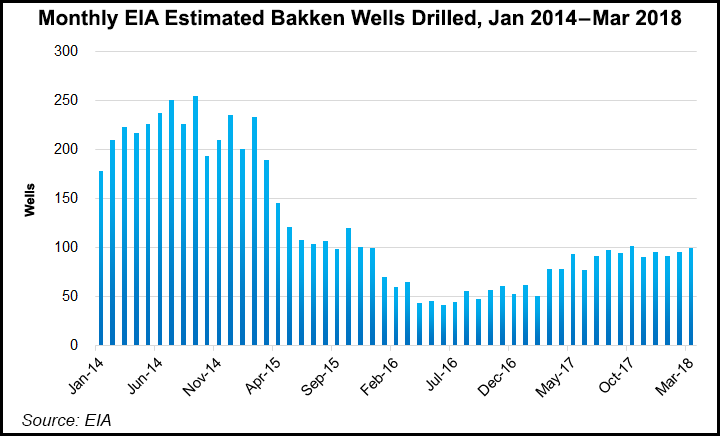 During an earnings call Tuesday to discuss 1Q2018, CEO Brad Holly said Whiting had undertaken a “very robust process” as it explores monetizing assets from its Redtail development program, which targets the A, B and C intervals of the Niobrara formation and the Codell/Fort Hays formations.

Although bids were originally due this week, Holly said that “due to interest and activity, we delayed that slightly. But bids are due next week, and we expect to complete the process late in the second quarter or early in the third quarter.”

When asked what Whiting would do with any proceeds from a Redtail sale, Holly said the company “will likely do a combination of both paying down debt and potentially reinvesting for growth. We’re not ruling out…potentially looking at buying back shares if that makes the most sense.”

A sale would also increase the company’s focus on the Williston and the Bakken Shale.

“We really like the basin,” Holly said of possible bolt-on opportunities in the Williston. “We think there’s more to do out there. We think we have substantial opportunities in all of our areas,” and could “potentially increase the geographic footprint” to economically drill in the Bakken.

Whiting executives said it was unlikely any of its nonoperated acreage in the Bakken would be sold, in part because the company is “enjoying the additional insight” from other operators working in the area, especially with regard to drilling and completions. Whiting holds 409,593 net acres in the Williston.

Whiting was planning to add a fifth drilling rig to its Williston drilling program at the end of April, according to an investor presentation. It is currently running up to four completion crews in the Williston.