Denver-based Whiting Petroleum Corp. officials said Friday they expected to greatly ramp up production in both the Bakken and Niobrara shale plays later this year as they reported production for the second quarter that was up substantially from the same period in 2012. 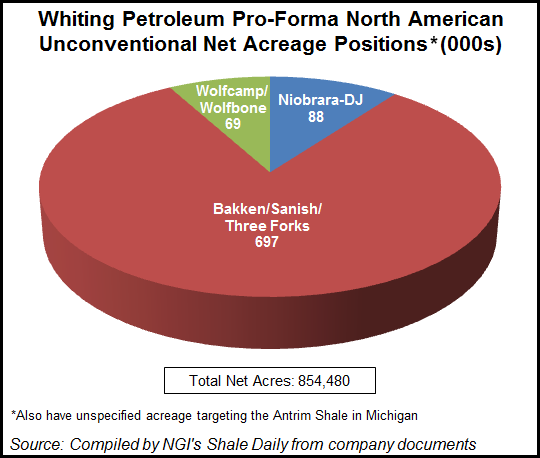 While reporting 2Q2013 and six-month earnings declines ($134 million vs. $150 million in the second quarter of 2012, $220 million vs. $248 million for the first six months of last year), Whiting CEO James Volker stressed that the company was revising its production projections upward following its $837 million Postle oilfield asset sale in Oklahoma (see Shale Daily, June 25).

“With the sale of our Postle assets, we have the liquidity to accelerate development of our high rate of return Williston Basin Bakken and DJ Basin Niobrara assets,” said Volker, adding that the company has its 2013 production growth guidance to equate to a 12% increase over 2012 levels and a 19% increase excluding the production associated with the Postle assets.

Niobrara results continue to improve, and it should be a significant “value-driver” for Whiting, according to Jason Wangler, an analyst with Wunderlich Securities Inc.’s equity research unit. Whiting recently added a second rig in the Niobrara, coming off “strong recent results” and added capital from the Postle sale, said Wangler, who added that the company’s activity in the Williston Basin in North Dakota should continue to be “fast and furious.”

“The Postle sale allows for increased activity and debt reduction without a significant drop in cash flows,” Wangler said.

Whiting said that 2Q2013 production was 8.5 million boe with 87% being crude oil/natural gas liquids (NGL). That production equaled 93,380 boe/d, a 4.8% increase from the first quarter this year and a 15.7% increase over production in the second quarter last year.

Following the Postle sale that netted more than $800 million, Whiting said it has increased its capital budget for the year by $300 million to $2.5 billion.

“With the Postle sale proceeds, we expect to capitalize on the potential of our DJ Basin Redtail Niobrara area,” Volker said.

“Our most recent wells have benefited from longer laterals and larger sand volumes. We believe our completion practices translate into higher EURs [estimated ultimate recovery] and greater returns on capital.”

With a second rig in place in the Niobrara and a third slated to arrive in October, Volker said Whiting can “enhance recovery” by drilling on tighter spacing in its 88,000-net-acre lease position that could provide up to 2,400 drilling locations.