The Trump administration looked to advance Lower 48 liquefied natural gas (LNG) exports to Europe along two fronts Tuesday, with one official saying the White House wants to help facilitate U.S. exports to the continent and another urging European allies not to participate in a pair of pipeline projects backed by Russia. 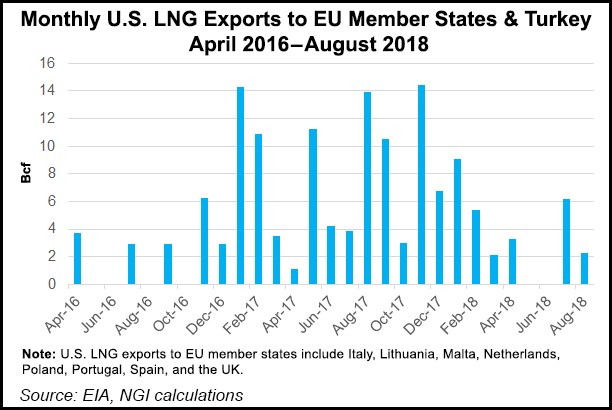 Meanwhile, Department of Energy Secretary Rick Perry met with Hungarian Foreign Affairs and Trade Minister Peter Szijjarto in Budapest on Tuesday and urged the country and its neighbors to reject participating in Russia’s Nord Stream 2 and TurkStream, aka Turkish Stream.

“Russia is using [the projects] to try to solidify its control over the security and the stability of central and eastern Europe,” Perry said, according to Reuters. The United States “strongly opposes these projects and we urge Hungary and its neighbors to join us in rejecting them.”

The issue of Europe’s dependence on Russia for energy supplies is a sensitive one. After Russia invaded and annexed Crimea in 2014, the United States and its allies sanctioned some energy companies and executives. The sanctions, coupled with burgeoning U.S. gas supplies, have opened the door to more LNG imports to the continent.

Nord Stream 2 would have 55 bcm (1.94 Tcf per year) of transport capacity and run 1,222 kilometers (759 miles) under the Baltic Sea. The pipeline would connect the Russian port of Ust-Luga, near St. Petersburg, to Greifswald in northeast Germany. Nord Stream 2 is expected to enter service by the end of 2019.

TurkStream would have 31.5 bcm (1.11 Tcf per year) of transport capacity and run 930 kilometers (577.9 miles) under the Black Sea. It would connect the Russian port of Anapa to Kikikoy, a village in northwest Turkey at the tip of the European continent.

According to Hungary’s official government website, Perry said Russia “is using energy sources as a weapon, and for this reason relieving dependence on Russian gas is also a security issue.”

Szijjarto reportedly told Perry that Hungary would be willing to buy gas from Croatia and Romania, two fellow EU members. LNG Croatia LLC is building a floating import terminal on the Croatian island of Krk, which would have 2.6 bcm (91.8 Bcf) of import capacity.

Hungary signed an agreement in July with Gazprom to link to TurkStream by the end of 2019. Russia’s Gazprom is also considering natural gas exports to Bulgaria and Serbia by 2020 through TurkStream, according to reports.

Last July, President Trump and European Commission President Jean-Claude Juncker pledged to work together to negotiate a bilateral trade deal between the United States and the European Union (EU). Such an agreement would aim to eliminate tariffs on steel and aluminum, but it would also call for Europe to build more LNG import terminals, through which the 28-member trade bloc could import more U.S. gas. Also in July Trump said U.S. LNG would compete against Nord Stream 2 for customers in Europe.

“They want LNG,” Kudlow said of the EU. “They want it badly, and we’re going to do whatever we can to accommodate.”

LNG imports were also a topic of discussion at a September meeting between Trump and Polish President Andrzej Dudato. Poland’s state-owned oil and gas company, PGNiG, signed a five-year contract in November 2017 for LNG sourced from Cheniere Energy Inc.’s Sabine Pass terminal in Louisiana. PGNiG also agreed in June to import more gas from two separate proposed projects by Venture Global LNG that are to be built in Louisiana and Texas.

According to the U.S. Energy Information Administration, nearly 90% of Russia’s 7.5 Tcf went to Europe via pipeline in 2016, the most recent year for statistics. Russia’s customers included Germany (1.7 Tcf), Italy (0.7 Tcf), the UK (0.6 Tcf) and France (0.4 Tcf), as well as Austria, the Czech Republic, Hungary and Poland, which each received 0.2 Tcf.