With demand strong and production poised to rise through this year, Whistler Pipeline is expanding its infrastructure and capacity in the Permian Basin, co-owner WhiteWater Midstream LLC said Tuesday. 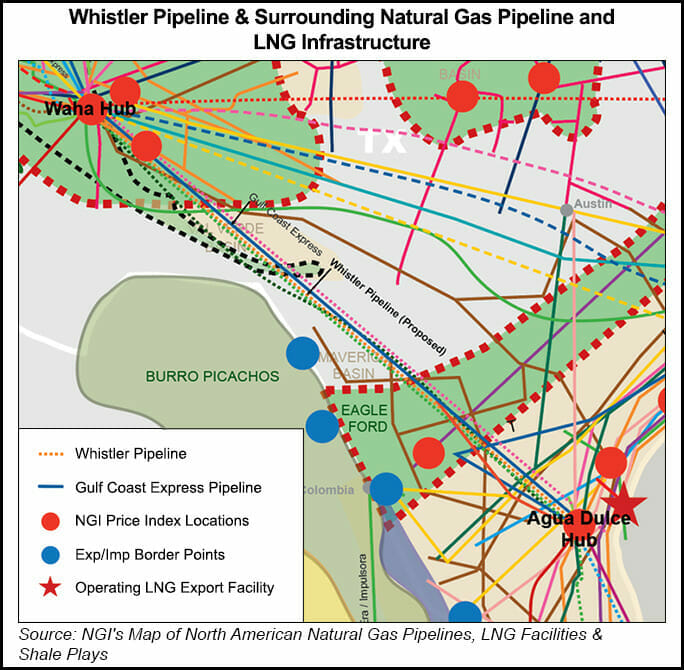 WhiteWater said Whistler’s mainline capacity would be expanded to about 2.5 Bcf/d – up from 2.0 Bcf/d now — through the planned installation of three new compressor stations. The added stations are scheduled to be in service by September 2023.

U.S. LNG facilities have been running near capacity for much of 2022. Strong buying from Asia and Europe during the winter months fueled momentum. Russia’s invasion of Ukraine punctuated the demand from Europe this spring. Countries across the continent are scaling back their dependence on Russian gas in protest of the war and, to fill the void, they are ramping up calls for American LNG.

At the same time, new production units, including Cheniere Energy Inc.’s sixth train at the Sabine Pass LNG export terminal, are adding capacity in the Gulf.

Whistler — owned by a consortium including WhiteWater, MPLX LP and a joint venture between Stonepeak Partners and West Texas Gas Inc. – also operates an 85-mile, 36-inch lateral that provides connectivity to the Midland Basin.

The Whistler expansion comes amid lofty natural gas prices and forecasts for rising production through 2022. The Energy Information Administration (EIA) in April estimated that U.S. dry natural gas production would average 97.4 Bcf/d for full-year 2022, up 3.8 Bcf/d from 2021 levels. The expected increase reflects in part responses to the robust LNG demand, EIA said.

Notably, Chevron Corp. and ExxonMobil both said they are ramping up natural gas production in the Permian and expect double-digit percentage gains in 2022 when compared with last year.

Separately, in April, Permian Highway Pipeline LLC (PHP) launched a binding open season to solicit commitments for a project that would expand its capacity by about 650 MMcf/d to 2.75 Bcf/d.

That project would primarily involve compression expansions on PHP to increase natural gas deliveries from the Waha area of West Texas to multiple mainline connections, including Katy, TX, and various Gulf Coast markets.