With daytime temperatures reaching close to 80 degrees in Texas and the 60s in parts of the country that dipped into the single digits just days ago, the only direction for natural gas forward prices for the Jan. 31 to Feb. 6 period was down. March plunged an average 55 cents during that time, and April tumbled an average 28 cents, according to NGI’s Forward Look. 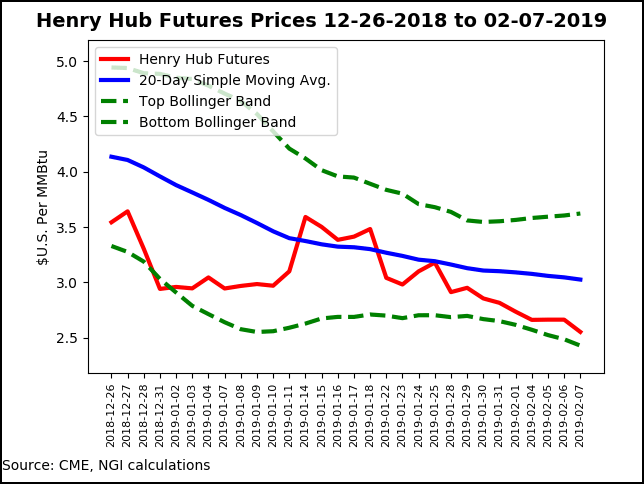 Forecasts are calling for the return of cold conditions with a pair of weather systems this weekend and next week, but models can’t seem to agree on the intensity of the frigid fronts. The American and European models had more or less converged on Wednesday, but then the European model lost a significant chunk of demand in its overnight run. The Global Forecast System model also trended milder in the latest midday data, but then both models added back some cold risks in overnight Thursday runs, according to NatGasWeather.

Still, the loss of 23 heating degree days compared to Wednesday’s data led to a rapid sell-off during early-morning trading on Thursday. The data continues to favor swings in demand during the next two weeks as numerous cold shots are forecast to sweep across many regions of the country, “but still with mild breaks across the South and East that really stand out,” NatGasWeather said.

Meanwhile, any fears of a supply crunch this winter have dissipated, and the latest Energy Information Administration (EIA) storage data reaffirmed that sentiment. The EIA reported a 237 Bcf withdrawal from inventories for the week ending Feb. 1. The reported build fell about 10 Bcf shy of market expectations for a week that featured the coldest temperatures of the winter in key demand regions.

Genscape Inc. reported that since Sunday, deliveries headed to Cheniere Energy Inc.’s Sabine Pass LNG swiftly declined to 770 MMcf/d for the Wednesday gas day, down nearly 2.5 Bcf/d from a previous average of 3.2 Bcf from the week prior. Nominations showed declines in deliveries across all systems feeding Sabine Pass.

Genscape alerted its LNG clients on Sunday about the outage at Sabine Train 1 when its proprietary monitors immediately spotted a stop to activity, although Cheniere has not made any public announcement regarding the cause of the outage.

Kyle Cooper of IAF Advisors noted, however, that heavy fog in the area had prevented ships from entering and leaving the terminal. “Storage tanks filled up and had to shut down. The fog has cleared, and we should see higher flows as soon as ships draw down storage,” he said on Enelyst.

Meanwhile, Creole Trail Pipeline did have a single-day scheduled maintenance event planned for Feb. 5 at its Gillis compressor station in Beauregard County, LA, however, “the event was only expected to last a total of six hours and would not be a significant source of the large feed-gas decline observed these past few days,” Genscape natural gas analyst Allison Hurley said.

The Nymex March gas futures contract went on to settle Thursday 11.1 cents lower at $2.551, while April dropped 8.5 cents to $2.572, flipping the so-called widow-maker spread to negative as any lingering supply fears have been erased.

Losses along the forward curves were wide ranging for the Jan. 31-Feb. 6 period, but Northeast markets were hit hardest as temperatures rose to more springlike levels after last week’s Arctic blast moved out of the region.

But another storm system is on the way. After reaching a forecast high of 54 on Friday, New York City could see temperatures plunge as much as 35 degrees later that night, according to AccuWeather. A blast of Arctic air, second in magnitude only to that of late January, is forecast to extend from the northern Plains through the rest of the central United States on Friday and spill over into the East during Friday night, the firm said.

“Overall, temperatures will be 15-25 degrees higher in the core of this blast compared to the blast from late January. However, this dose of Arctic air will still pack a punch, cause some pain and create dangerous and even life-threatening conditions for a time,” AccuWeather senior meteorologist Alex Sosnowski said.

The air is riding on the heels of a storm with heavy snow over the Upper Midwest and severe thunderstorms and flooding over the Mississippi and Ohio valleys on Thursday. As the storm pivots into southern Canada, “the gates of the Arctic will be wide open to allow the cold air to spread to the Gulf and Atlantic coasts,” Sosnowski said.

Similar to that of the early January outbreak, the core of the frigid air will settle over the North Central states and will undergo significant moderation spilling toward the Gulf coast and across the Appalachians and East Coast. A lack of snow-cover will assist with the moderation, according to AccuWeather.

Furthermore, the weekend cold snap is expected to be brief, as is another weather system on tap for next week. With the days of winter winding down, steep losses of more than $1 were common throughout the Northeast.

Dominion South and Columbia Gas, meanwhile, posted declines that were much more in line with Nymex futures.

March prices at Waha are faring much better than current spot prices at the Permian Basin pricing hub. On Monday, cash prices plunged to just 9 cents, their lowest level ever. Tuesday’s modest increase put cash at the second lowest level while prices for Friday’s gas day continued to strengthen.

Disruptions to flows out of the Permian Basin are one factor contributing to the recent weakness, according to Genscape. A force majeure on El Paso Natural Gas Pipeline was cutting about 180 MMcf/d of Permian outflows, and a separate maintenance event that was in effect for several cycles Tuesday had been postponed to this weekend.

Over in the West, Northwest Sumas posted a rare upswing at the front of the curve as wintry weather boosted demand and spot prices this week. Pacific Northwest pipeline reported demand spiked to a two-year high of more than 3.1 Bcf/d as daytime highs around Seattle fell to as much as 20 degrees below normal this week, according to Genscape.

Flows to the Pacific Northwest on the Northwest Pipeline are consistently running at or near 90% of capacity, while flows to Pacific Gas & Electric via Ruby Pipeline have topped the 1 Bcf/d mark in recent days, Genscape said.

The strength in summer prices comes as unplanned repairs are ongoing at Southern California Gas’ (SoCalGas) Aliso Canyon storage facility, which is cutting a third of its withdrawal capacity.

SoCalGas retroactively announced that these repairs have been ongoing for nearly a week, limiting withdrawal capacity by about 420 MMcf/d, according to Genscape. SoCalGas has stated that it is repairing aboveground piping at the facility, and that the end date for this work is still to be determined.

Cold weather and limited supply initially led to SoCalGas issuing a call for voluntary electric generation curtailments. Later, the company announced it was also implementing non-voluntary curtailments in order to maintain system integrity, having deemed imports and withdrawals (including those from Aliso Canyon) insufficient, Genscape said.

After setting a new year-to-date high for Wednesday’s flow date, SoCal Citygate cash basis more than doubled to hit $17.78 for Thursday’s flow. That mark is the highest since last August and the fourth-highest ever, Bernardi said. SoCal Border basis hit $7.60, its third-highest mark this decade, NGI data show.