Anxious to see the review process restarted for the Jordan Cove liquefied natural gas (LNG) project, western Colorado producers appealed to FERC again on Wednesday to consider the socioeconomics to their region along the Western Slope of the Rockies as part of any renewed environmental assessments. 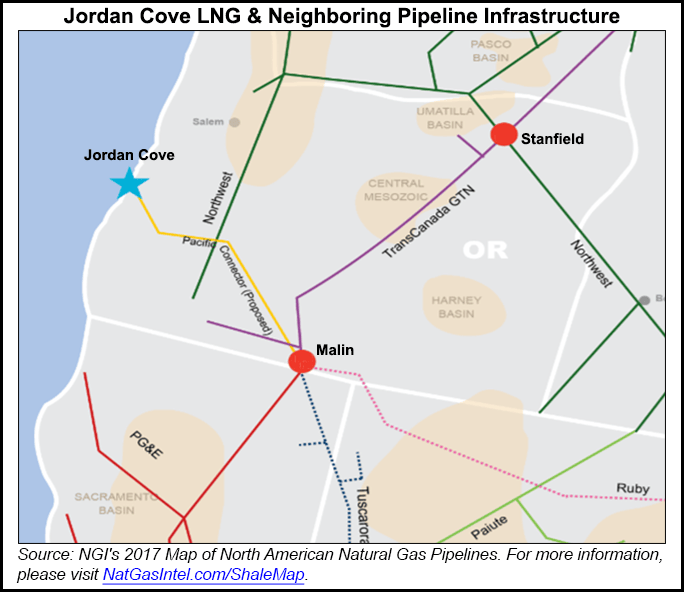 In a letter to Federal Energy Regulatory Commission, David Ludlam, executive director of the West Slope chapter of the Colorado Oil and Gas Association (WSCOGA), reminded federal regulators that under federal environmental law, they must consider the socioeconomic benefits that were documented in a previously completed assessment of the proposed LNG export project along the Oregon coast.

“The agency must not again re-do the document and should instead use information in the recently approved 2015 Jordan Cove LNG Terminal and Pacific Connector Pipeline project environmental impact statement [EIS],” Ludlam wrote in a seven-page letter to FERC.

The Colorado gas producers weighing in comes at a time when Jordan Cove’s Calgary-based backer Veresen Inc. is trying to restart FERC applications that FERC rejected forthe $7.5 billion, 1 Bcf/d project at Coos Bay, OR. Veresen CEO Don Althoff has said that the pending Jordan Cove request for reconsideration should be done by August, and the re-application decision should be in FERC’s hands by August 2018.

The currently unfilled vacancies at the Commission won’t affect the ongoing process, according to Althoff.

“Northwest Colorado suffers economically under depressed natural gas prices and the lack of access to free trade and new overseas markets,” Ludlam said. “This fact is troubling given the same opportunities have been afforded by FERC to producing states who supply Gulf Coast and Maryland export terminals.”

Ludlam and the Colorado producers urged FERC to deliver “prompt completion” of a new EIS and eventually a certificate of approval for the long-standing project.

Since the Trump administration has expressed support for Jordan Cove, Ludlam told NGI that a groundswell of support has come out of Piceance Basin from industry, business and elected representatives.

“From the FERC standpoint, this is like a new project it has never seen,” he said. “They’re making Veresen go through the entire process all over again.”

Ludlam and WSCOGA members last month met with FERC officials in Washington, DC, and he concluded that there is a newfound “optimism” toward the Jordan Cove project, and said past concerns and problems have been rectified. “We have to be optimistic about of chances of getting a West Coast LNG export project approved under this administration and the upcoming FERC.”