Western Canadian natural gas will continue to face stiff competition from unconventional American production, according to the operator of the supply collection grid in Alberta and British Columbia (BC). 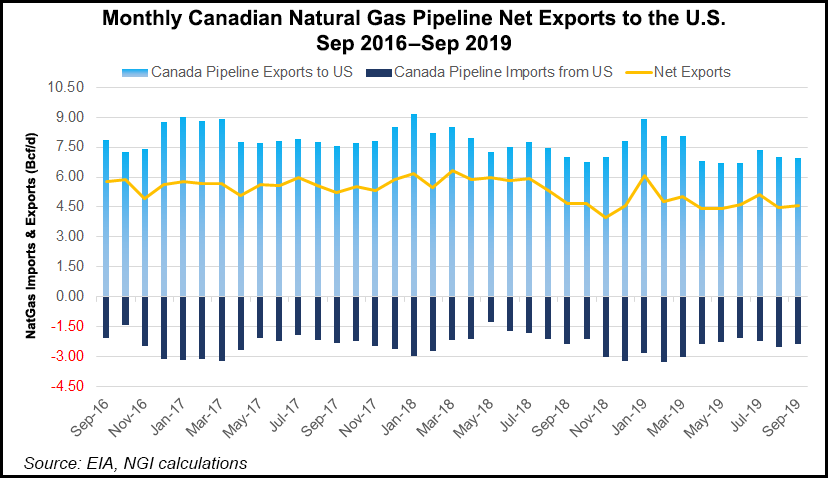 Over the past 10 years, new drilling and pipeline expansions in the United States have escalated rivalries across all destinations for Canadian exports, said TC Energy Corp. subsidiary Nova Gas Transmission Ltd. (NGTL).

In evidence filed to seek approval by the Canada Energy Regulator (CER) for a toll settlement with Alberta and BC shippers, NGTL adds up gas trade effects measured in billions of cubic feet per day from the American “shale gale.”

Increased output and deliveries from the Appalachian Basin, Bakken Shale and Rockies flow into Canadian gas export markets in California, the Midwest, Northeast and Pacific Northwest, NGTL said in its filing.

“All of these basins, and other North American basins such as the Permian, which is expected to grow its production from 8.4 Bcf/d in 2018 to 18.2 Bcf/d by 2028, are interconnected through various pipelines,” NGTL said.

“These basins compete for markets within the continent and to serve the emerging and growing” LNG (liquefied natural gas) export markets, the company added.

Bakken gas from North Dakota rides piggyback to the U.S. Midwest on Canadian cross-border conduits, with about 1.9 Bcf/d flowing on Northern Border and 300 MMcf/d on Alliance Pipeline.

Since 2008, the Dominion, Empire, Millennium, Tennessee, Texas Eastern and Transcontinental interstate pipelines in the United States have increased Appalachian natural gas service to the U.S. Northeast by 36% to 14 Bcf/d.

Over the past 10 years, the ANR, Columbia, Express, Rockies, Texas Eastern, Texas Gas, Tennessee, Nexus and Rover systems grew capacity to the U.S. Midwest from Appalachian shale fields in Pennsylvania, Ohio and West Virginia nearly 11-fold to 14 Bcf/d from 1.3 Bcf/d.

Capacity for Rockies gas from Colorado, Wyoming and Utah to reach Pacific coast markets on the Kern River, Northwest and Ruby pipeline systems has jumped by 70% since 2008, to 4.6 Bcf/d from 2.7 Bcf/d.

“By 2028 additional pipeline capacity could be added in any of these transportation corridors,” NGTL said. “Any additional capacity is most likely to be added from supply basins that are experiencing production growth.”

But NGTL expects a combination of Canadian and U.S. demand, plus low-cost supply development in Alberta and BC, will support its C$10 billion ($7.5 billion) series of capacity additions currently under construction or awaiting CER approval.

“Long-term commitments recently executed by the shippers underpinning NGTL expansions is further demonstration of the long-term market demand for transportation services and of the competitiveness of the Western Canada Sedimentary Basin gas supply,” said the TC Energy subsidiary.