Natural gas production will rise by 4.3 Bcf/d, or 30%, to 18.4 Bcf/d as of 2025 from the Western Canada Sedimentary Basin (WCSB), according to TransCanada Corp.’s pipeline network in Alberta and British Columbia (BC). 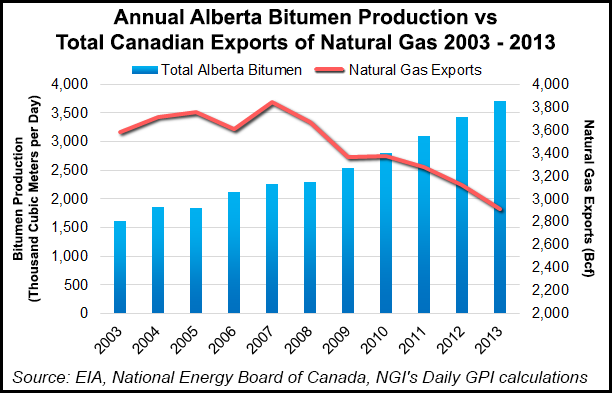 NGTL canvassed producers and shippers as well as added up service orders to prepare the forecast as support for an application to the National Energy Board (NEB) to build C$1.14 billion (US$912 million) worth of new facilities by April 1, 2017.

The construction program highlights emerging features of the born-again WCSB. The proposed grid additions include pipeline legs and compressors in both northwestern and northeastern Alberta.

In the northwest the facilities are designed to fetch shale gas supplies from deposits being tapped with horizontal drilling and hydraulic fracturing in both Alberta and BC.

Apart from minor calculating differences the NGTL outlook paints the same picture of continuing northern Alberta industrialization, through the current oil price low, as recent forecasts by the NEB and the Canadian Association of Petroleum Producers (CAPP).

An oilsands project count by the NEB shows new plants and improvements to operating sites raising output by 1 million b/d as early as 2018. Thermal extraction systems use an average 1 Mcf of gas per barrel of production.

CAPP surveys of its members, which do about nine-tenths of Canadian production, show output growing by 150,000 b/d in each of this year and 2016 alone. Capital spending on oil sands growth remains a hefty C$25 billion (US$20 billion) in 2015 even after a collective C$8 billion (US$6.4 billion), 24% drop from last year.

But the modest growth anticipated in long-distance sales of WCSB production beyond its own region is expected to be on overseas markets for liquefied natural gas (LNG) instead of into traditional central Canadian and U.S. pipeline destinations.

The forecast said NGTL has been advised that a leading candidate to build the first LNG terminal on the northern Pacific coast of BC — Progress Energy, Canadian arm of Malaysian conglomerate Petronas — only postponed and did not drop its plan by calling a timeout on a final investment decision in December. The Progress-Petronas project is the prime delivery service customer for a BC addition to the NGTL network that is currently advancing toward NEB approval.

But NGTL also concedes that LNG projects in the U.S. will surpass their Canadian rivals. Overseas tanker deliveries from U.S. terminals will grow swiftly to 8.2 Bcf/d by the early 2020s, predicted the BC and Alberta pipeline network.

Prices only have to improve modestly and gradually to support the emerging gas supply development rebirth, NGTL predicted. As in the United States, shale drilling and production costs are dropping steadily as experience with the technology sets a long-range “equilibrium” point of US$4.80/MMBtu as a sweet spot low enough to encourage demand growth yet high enough to sustain remote Canadian field operations, NGTL said.