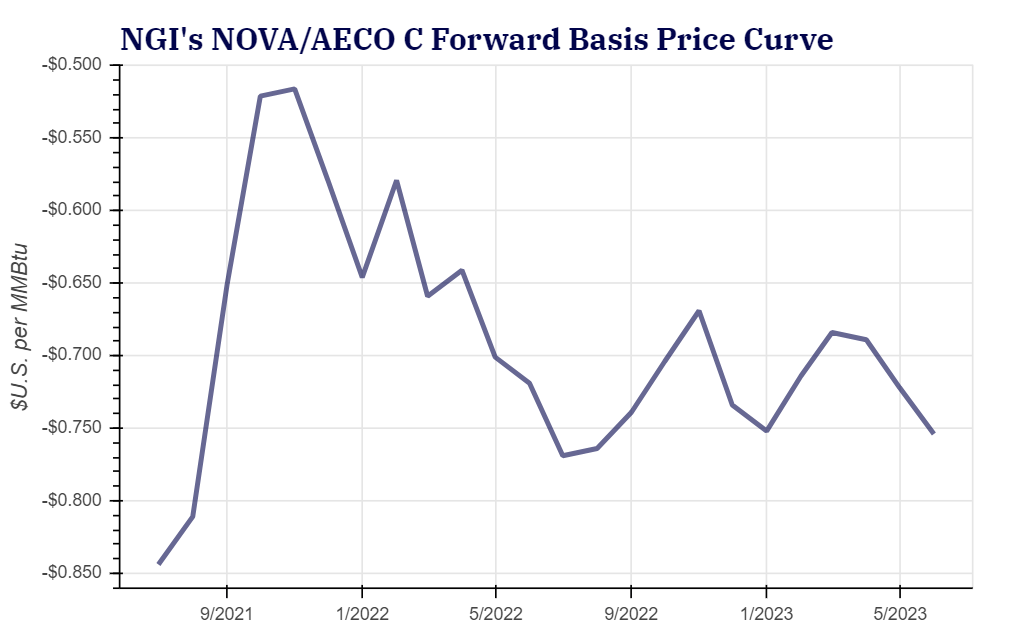 August prices shot up an average 19.0 cents over the six-day period, led by an astounding C28.0-cent climb at NOVA/AECO C. The stout gains continued throughout the front of the curve and extended through next winter, as the likelihood increased that storage inventories would be much less than normal ahead of the peak demand season.

The oppressive heat led to numerous fatalities. The death toll was in the dozens as of Thursday, with at least 13 deaths in the Seattle area being attributed to the excessive hot weather. In Oregon, the medical examiner’s office in Multnomah County, which encompasses Portland, said that at least 45 fatalities had occurred because of heat exposure.

Natural gas demand in the Pacific Northwest, for example, averaged around 1.78 Bcf/d in the seven-day period ending July 1, according to Wood Mackenzie. This was up from the recent 30-day average of 1.62 Bcf/d, as well as last year’s 1.09 Bcf/d average for the same 30-day period.

Gas demand spiked to 1.89 Bcf/d in the region on Tuesday (June 29), Wood Mackenzie data showed. For the first full week of July, demand is expected to tumble back to around a 1.16 Bcf/d average.

The unprecedented temperatures in what is normally a mild region are because of the intensity of a heat dome that developed and caused a high pressure system to get stuck in place, according to AccuWeather.

“When the jet stream shifts far to the north, it allows extreme heat to surge into places that typically do not experience such conditions,” AccuWeather senior meteorologist Randy Adkins said. “It’s almost like allowing an air mass that you would normally see in the Desert Southwest shift to the Pacific Northwest.”

In Portland, OR, daytime highs shot up to 116 degrees on Monday (June 27), smashing the previous daily record of 100 degrees, according to AccuWeather. Canada’s all-time record high was shattered as the mercury in Lytton, British Columbia, shot up to 121 on Tuesday.

Though temperatures had fallen to more comfortable levels in some coastal areas of the Pacific Northwest, the National Weather Service (NWS) said temperatures 10-20 degrees above average were expected to remain over the Interior Northwest through Saturday (July 3).

Highs in the upper 90s and low triple-digits may have the potential to break a few daily high temperature records, according to NWS. As an upper-level ridge migrates to south-central Canada on Friday, above-average temperatures and oppressive heat may stretch into the Northern Plains. With much of the region experiencing severe drought conditions, NWS said the heat could provide potential wildfires “a ripe environment” to grow rapidly.

Meanwhile, Aegis Hedging Solutions said in a note on Wednesday that several compressor stations in Western Canada were offline for periods of time because of the extreme heat. The unplanned compressor outages began in the final weekend of last month (June 26-27) and resulted in a decline in field receipts.

The strained conditions, and projected impact on Western Canada storage, were on full display across the forward curve.

Forward Look data showed NOVA/AECO C August prices climbing C28.0 cents from June 24-30 to reach C$2.8390/GJ. Although posting the largest increase across North America, the price for August delivery still proved to be a bargain, coming in more than C$1.30 less than August gas at Malin, OR, which delivers into Pacific Gas & Electric Corp.’s Redwood Path. The basis to Henry Hub stood at about 81.0 cents for the prompt month.

Further along the curve, gains were as impressive. AECO’s winter strip (November 2021-March 2022) tacked on C21.0 cents to average C$3.090, according to Forward Look. Summer 2022 prices were up C12.0 cents to C$2.250. The steep rise in prices further out the curve come amid below-average storage inventories that in Western Canada that were expected to fall further below historical levels after the blistering heatwave.

Meanwhile, Malin, which is comprised in part of deliveries from TC Energy Corp.’s Gas Transmission Northwest Pipeline, saw the August contract edge up only 8.0 cents in the trading period, but to a much higher $4.201, Forward Look data showed. However, the rest of the summer notched far plumper gains. The balance of summer added 41.0 cents during the period to average $3.940. Winter prices tacked on 7.0 cents to $4.20.

As if the historic heat and various issues it caused weren’t enough to wreak havoc on the market, Wednesday’s news that about 2 Bcf/d of Northeast production was being curtailed sealed yet another move higher for Nymex futures.

In a pipeline notice, Columbia Gas Transmission (TCO) attributed the decline in production to an operational event upstream at MarkWest Energy Partners LP’s Sherwood and Mobley plants in West Virginia. The events were effectively curbing production and necessitated “a curtailment of scheduled volumes by the upstream point operators” to zero for Thursday.

Criterion Research LLC natural gas analyst James Bevan explained the impacts on Thursday during The Desk’s online energy chat Enelyst. The outage, he said, had a “severe impact” on flows across the Northeast, with major production drops on TCO, EQM Midstream and Rover pipelines. Since Tuesday (June 29), Appalachian on-pipe production nominations had crashed by a combined 4.5 Bcf/d, with the largest taking place on TCO (minus 2.1 Bcf/d), Rover (minus 0.7 Bcf/d) and EQT (minus 0.59 Bcf/d).

“Overall, Appalachian production dropped hard with the late-cycle nominations, giving up minus 0.95 Bcf/d as the new flow data rolled into the models,” Bevan said. “Appalachian production fell even harder Thursday, dropping by another 2.66 Bcf/d to a modeled rate of 30.3 Bcf/d, which represents by far the lowest levels in the last 12 months.”

TCO said the reduction on system supply was around 2 Bcf. However, as of Thursday (July 1), the pipeline’s Appalachian receipts had dropped to 4 Bcf/d, from more than 6 Bcf/d on Tuesday.

Bevan said Thursday’s pipeline nominations indicated that the production drop immediately pulled back outflows to the Midwest to 10.6 Bcf/d.  Liquefied natural gas (LNG) exports at the Cove Point LNG export terminal in Lusby, MD, also were impaired. However, Transcontinental Gas Pipe Line appeared to be able to increase its exports toward the southeastern part of the country.

“Northeastern outflow into the Midwest was already struggling earlier this week due to high regional demand, but the MarkWest outage has knocked flows down even further to 10.6 Bcf/d,” Bevan said.

The TCO discussion was part of a larger segment on Enelyst’s chat following the latest round of government storage data, which also made some waves on Thursday.

The Energy Information Administration (EIA) launched a “bear bomb” on the natural gas market, reporting a much larger-than-expected 76 Bcf injection into storage for the week ending June 25. The EIA figure was slightly outside the range of expectations in major surveys and 3 Bcf above last year’s build for the similar period. The five-year average stood at 65 Bcf.

Bespoke Weather Services said the 76 Bcf injection was “much looser, balance wise,” than last week’s 55 Bcf build. However, it is “still a little tighter than the five-year average supply/demand balance.”

Meanwhile, the market is on track for another tight number next week, according to Bespoke.

“Prices sold off on this number, but we really do not see the backdrop as bearish, even in light of the 76 bcf build, and the much higher price point versus the last couple of weeks,” the firm said.

Still, after seven days in the green, “the market needs to rest for a minute anyway,” according to Huntsville Utilities natural gas supply manager Donnie Sharp.

That much-needed rest proved to be brief. The August Nymex futures contract softened following the EIA report, even dropping below $3.600. However, the prompt month managed to eke out an eighth consecutive day on the positive side of the ledger, settling 1.1 cents higher day/day at $3.663. The September contract inched up eight-tenths of a cent to $3.633.