The flood of natural gas that will exit Appalachia for the Midwest when Rockies Express Pipeline (REX) brings online new reverse capacity in its easternmost segment (Zone 3) is expected to rearrange markets around much of the continental pipeline network. 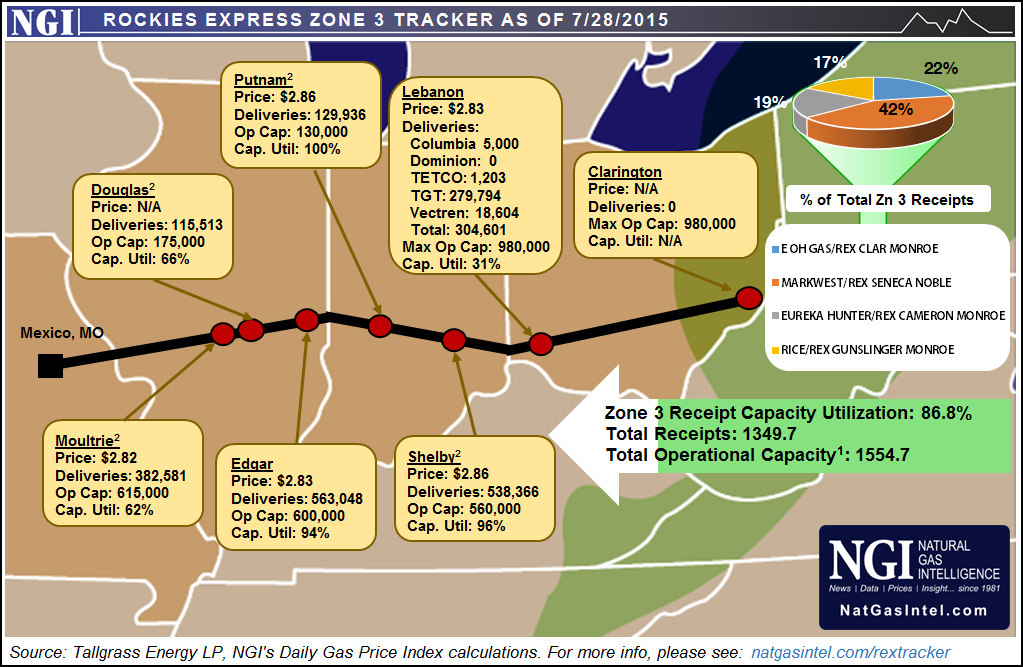 That shakeup will begin Aug. 1 when REX starts up its East-to-West expansion to add 1.2 Bcf/d of incremental westbound capacity from its easternmost point in Clarington, OH, to Moultrie, IL.

The forward-haul east-to-west capacity is fully supported by firm contracts and is to come online Aug. 1. That will make for a total of 1.8 Bcf/d of westbound capacity on the Zone 3 stretch of REX from Clarington to Moultrie. (The existing 1.8 Bcf/d of west-to-east capacity from the Rockies to Clarington will remain and is still in demand, at least to the Midwest, the pipeline says).

The output of Appalachian producers moving to the Midwest on the large-diameter REX pipeline will be felt throughout much of the continental pipeline network, thanks to the robust and growing connectivity of REX. There have been and will be other pipelines tapping into the largest natural gas producing shale basin, but the importance of the REX project lies in its multiple receipt points in that basin and the large number of connecting pipelines that can take gas from REX north straight to Chicago and other points in the Midwest, as well as south should liquefied natural gas export and chemical markets prosper.

True then, more true today. In order to more closely follow flows in the region on REX, NGI has developed the Rockies Express Zone 3 Tracker, which is updated daily and will be adding additional analytics on the flows out of the Appalachian Basin in the near future. For more information, visit naturalgasintel.com/rextracker.

Marcellus/Utica gas production is robust and growing. Output from the Marcellus is now about 16.5 Bcf/d, which is more than eight times what it was five years ago, according to the U.S. Energy Information Administration. As for the Utica Shale, a recent study suggests that it contains more than 20 times as much technically recoverable gas than a 2012 estimate from the U.S. Geological Survey (see Shale Daily, July 14).

Clarington in Monroe County is becoming the Ohio supply hub for Appalachian gas. There are four REX Zone 3 receipt points currently online in the region. They and their design capacities are:

Additionally, four receipt points are slated to come online between this coming September and November 2016. They and their design capacities are:

When all that is said and done, Zone 3 will have total receipt capacity of 5.18 Bcf/d.

“Clarington is only going to get more important in terms of a pricing barometer for that area,” Tallgrass Energy Vice President and REX President Matt Sheehy told NGI. “You will see a lot more gas transact at Clarington. I think its liquidity will increase. I think its relevance will increase, and I think it will become the Ohio production zone price people quote.

“The interconnections at Clarington for major pipelines are going to continue to increase, from Tetco, REX and Dominion today, to include ET Rover EQT Ohio Valley, Williams, Regency Ohio River, and a host of gathering headers. All told, more than 10 Bcf/d of interconnectivity in the near future, with more than 5 Bcf/d of receipt capacity on REX alone.”

When new receipt points come online, they fill up right away, Sheehy said.

Westbound flows from Clarington to as far as Moultrie are poised to shake up the market as REX’s Zone 3 becomes the gateway to the Midwest for Appalachian producers. The pipeline has interconnects with about a dozen major north-south pipelines in Zone 3.

NGPL is expected to receive the majority of Marcellus gas moving on REX, and capacity at this interconnect is expected to grow to 1.75 Bcf/d from 615 MMcf/d.

“The reversal of REX is one of the most anticipated things in the natural gas investment community that I can remember for quite some time,” said Patrick Rau, NGI director of strategy and research and a former sell-side natural gas equities analyst. “How these westbound flows will impact regional basis differentials and netback prices is of profound importance to investors, and for many, the jury is still very much out.”

Current forward prices do offer some clues, though. Midwest demand centers served will see prices decline, according to an analysis of NGI’s Forward Look data. The Chicago Citygate has generally traded at a premium to Henry Hub. However, a slim discount to Henry in the August forward market appears to widen in September and October. The discount widens further from 4 cents for an average of all months in 2016 to 14 cents for all months in 2017 and then 16 cents in 2018, according to NGI (see Shale Daily, July 13).

Additionally, Rau said, the REX reversal and a combination of greenfield takeaway capacity from the southwestern Pennsylvania/northern West Virginia/southeastern Ohio production area, such as Rover, Mountain Valley and possibly Nexus, along with existing Gulf Coast-to-Mid-Atlantic pipeline reversals, is helping to boost forward basis differentials on Dominion South. On July 21, the December 2015 Dominion forward basis stood at minus $1.054, but it increases to minus $0.903, minus $0.753 and minus $0.670 for December 2016-2018, respectively.

Even gas from Western Canada will feel the pressure of Appalachian gas arriving on the reverse capacity of REX. “The REX reversal will move natural gas west from the congested U.S. Northeast, from Ohio to Illinois, which will compete with some Canadian exports to supply that market,” BMO Capital Markets analysts said in a July 7 note.

REX has already been moving some gas westward in Zone 3 since last year when the Seneca Lateral entered service (see Daily GPI, June 18, 2014), providing about 600 MMcf/d of capacity to serve MarkWest’s Seneca gas processing plant. More recently, the pipeline has been moving an incremental 400 MMcf/d for the past four months, and in recent weeks it has been moving upwards of 1.3 Bcf/d westward with the Seneca Lateral and incremental capacity combined, Sheehy told NGI.

The biggest impact on the market from this westbound gas has been to push gas that historically fed the nation’s midsection southward and into Producing Region storage caverns, according to a recent analysis by Observ Commodities.

The outlook for regional gas balances has turned out to be “much more bearish” than the market has been expecting. Chien said storage in the Producing Region will continue to balloon in August and September, and the expansion of a re-directed REX will continue to put pressure on Henry Hub prices.

Through the addition of three compressor stations and more horsepower at existing stations, the project will add 800 MMcf/d of westbound-only capacity from Clarington; about 500 MMcf/d of that capacity will end at Lebanon, OH, while the remaining about 300 MMcf/d will have to access to the Indiana-Illinois border area where there are interconnects with NGPL, Trunkline, Panhandle and Midwestern Gas Transmission.

When the Zone 3 Capacity Enhancement project comes online, REX will have total east-to-west capacity of 2.6 Bcf/d. The project is expected to be operational during the fourth quarter of 2016. “REX expects to add multiple new sources of supply as receipt points into Zone 3 prior to 2016,” the pipeline said on its website.

Despite the growing onslaught of Appalachian gas, Rockies gas is still moving east into Zone 3 and “hitting all the interconnected pipes,” Sheehy said, reaching Chicago, Minnesota, Michigan and the Gulf Coast region. This segment of REX is acting like a header system.

“REX provides a valuable outlet for the Rockies production. The Rocky Mountain production zone is still a prolific basin, and producers on REX still have a tremendous amount of gas needing a market.”

Rockies gas isn’t likely to get pushed out of the Midwest market by supply from Appalachia, Sheehy said. Like the Observ Commodities analysis, Sheehy believes gas from the Gulf Coast will get pushed back. “If I have to guess, I would say it’s going to be Gulf Coast; that’s just my opinion.”

Noble Energy Inc. said Thursday the bulk of its shut-in U.S. oil and gas production would be brought back online in the coming weeks.  Noble, whose vast U.S. portfolio extends across Texas and Colorado, said its second quarter curtailments totaled 11,000 b/d of oil. But “significant improvements in operating costs and netback pricing” will allow…