Liquids and natural gas production in West Virginia took a major leap forward in 2014, the latest year for which data is available, with the Marcellus Shale driving gas volumes to more than 1 Tcf for the first time in the state. 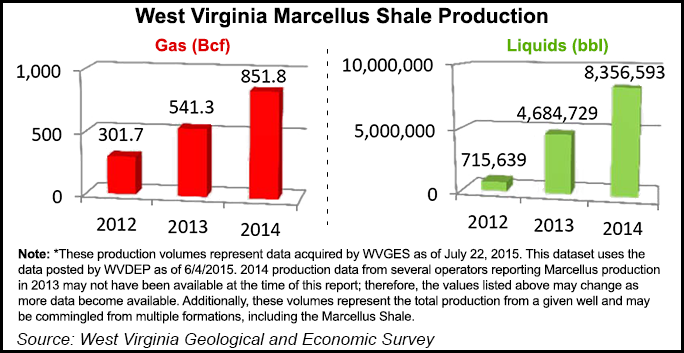 “There was a dramatic, dramatic increase in liquids production, mainly because there were more wells coming online that year and operators were drilling more in known NGL areas,” said an official at the West Virginia Geological and Economic Survey (WVGES).

Despite the downturn in oil and natural gas prices, sources said the state may see similar growth through 2016 for several reasons. The downturn, however, is expected to flatten production growth by 2017 once its effects catch up.

The Marcellus was the largest factor in production growth during 2014. According to a separate analysis by WVGES, which has an internal database that tracks Marcellus development, operators reported that the formation accounted for 851.8 Bcf of the gas produced, up from 541.3 Bcf in 2013. Liquids production in the Marcellus — a WVGES total that includes oil — accounted for nearly 8.4 million bbl in 2014.

Producers submit their annual production data to the WVDEP each March, and 2015 production totals are not expected to be released until later this year. WVGES officials and other sources told NGI’s Shale Daily that they expect to see another healthy increase in production in 2015 because many wells were completed in 2014 but not turned to sales.

“I don’t believe you’ll see a drop off until 2016 or even 2017,” said West Virginia Oil and Natural Gas Association Executive Director Corky DeMarco. “There were a bunch of wells completed in 2014, but production has only recently started on them. You may end up having a similar thing going on in 2016 too. Some of the laterals have just gotten so much longer. Some of the Utica wells have come online and there won’t be a big drop off on those for a little bit, like some of the older Marcellus. Those [Utica] wells were gushers.”

It was in early 2014 that operators began delineating their Utica acreage in the state (see Shale Daily, March 26, 2014). Later that year, several operators reported initial Utica test rates of more than 20 MMcf/d to nearly 50 MMcf/d (see Shale Daily, Sept. 25, 2014; Sept. 8, 2014). Both DeMarco and WVGES officials said that while the Utica likely contributed to 2014 production growth in a small way, the primary driver was the Marcellus. The Utica is forecast to be a bigger factor in upcoming production reports, especially as operators focus more on dry gas production.

From 2008-2010, West Virginia production hovered around 260 Bcf annually, before operators appeared to hit their stride in 2011, sending annual production to nearly 400 Bcf. It’s climbed ever since.

There were 28 rigs running in the state at the end of 2014, compared with 16 at the end of 2015 and 12 at the end of last week. WVGES data shows that 1,420 horizontal Marcellus wells reported production in 2014, up from 947 in 2013. The average lateral length of those wells in 2014 was 5,383 feet. In addition to more Utica Shale wells coming online and more wells across the state being tied to sales with gathering lines, DeMarco said production could go higher on laterals that are currently averaging more than 10,000 feet.

In order, Marshall, Ohio and Tyler counties were the top producing liquids counties. WVGES said each county reported more than 1 million bbl of liquids production in 2014. Doddridge, Harrison and Wetzel were the top three producing natural gas counties in 2014, with each reporting more than 150 Bcf of production.