The Public Service Commission (PSC) of West Virginia said this month that it again expects lower gas bills for two-thirds of the state’s residents during the upcoming winter heating season. 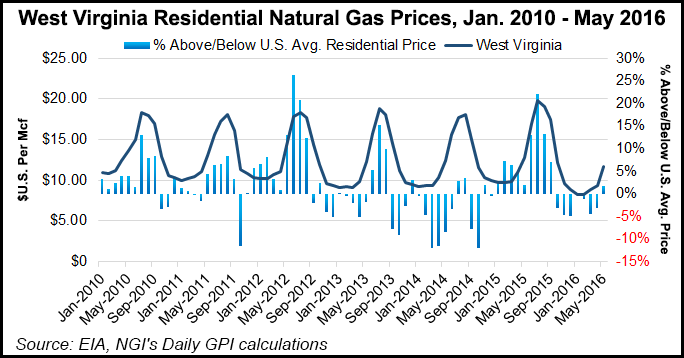 Eight of the 12 natural gas utilities operating in the state, the PSC said, have filed requests with the commission to lower the purchased gas portion of their rates.

Mountaineer Gas Company, the state’s largest natural gas distributor with more than 220,000 customers in 49 of the state’s 55 counties, has requested a decrease of $0.315/Mcf, or 6.55% lower than last winter’s rates. A typical Mountaineer residential customer using an average of 7 Mcf per month would see their monthly bills decrease by $2.21, the PSC said.

By law, gas utilities are allowed to recover their costs to purchase natural gas. Customer rates are adjusted annually to account for the cost of gas. Most of the state’s utilities requested lower rates last year, too, including Mountaineer, which reduced purchased gas costs by 20% from 2014 (see Shale Daily, Aug. 24, 2015).

The declines reflect falling natural gas prices in the region that have been pushed lower by robust production from the Marcellus and Utica shales, which have averaged a combined output of about 21.5 Bcf/d this month, according to the Energy Information Administration’s latest Drilling Productivity Report.

Natural gas production in West Virginia alone has increased substantially in recent years. In 2014, the latest period for which data is available, combined conventional and unconventional production was 1.04 Tcf, up 40% from the 741.9 Bcf produced in 2013 (see Shale Daily, March 9).