A dramatic decline in severance tax collections through the first three months of the fiscal year prompted West Virginia Gov. Earl Ray Tomblin on Monday to announce a 4% across-the-board cut in funding for most state agencies. 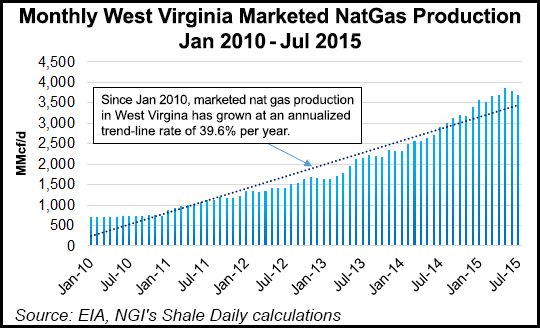 The cuts, Tomblin’s administration said, would amount to more than $100 million and are aimed at plugging a projected $250 million deficit in fiscal year 2016, which began in July. About $190 million of that shortfall is attributable to the drop in oil, natural gas, timber and coal revenues. While coal production has dropped 15% from July-August, compared to the same time last year, natural gas production was up roughly 30%. But stubbornly low gas prices and the fall in oil that has dragged down natural gas liquids has the state projecting a steep drop in those revenues.

“This is a difficult decision that results from several factors beyond our control,” Tomblin said. “We are taking this action based on trends we see in the first three months of the fiscal year that we expect to continue throughout this budget cycle. While the cuts we’re enacting today will not be easy, we must maintain a balanced budget and this will help us do that.”

Even state aid to public schools, which have seen no budget cuts in recent years, would be reduced by 1%. Tomblin said in addition to the budget cuts, he would freeze state hiring, eliminate nonessential travel for state employees and even cancel annual holiday parties. A one-time appropriation from the state’s Rainy Day Fund, which has grown to $869 million since it was established in 1994, could also be used to help close the budget gap, but Tomblin said he would try and keep that number as low as possible.

West Virginia’s oil and natural gas severance tax collections more than doubled last year, going from $79.2 million in 2013 to $188 million, according to the state Department of Revenue (see Shale Daily, April 22). But while overall severance tax collections rose by 2% through the first nine months of FY 2015, they dropped 31% during the final three months, reflecting both coal’s ongoing downturn and a drop in oil and gas prices. Shut-in gas that came online in early 2014 and higher prices helped lift the last fiscal year’s collections.

West Virginia is the nation’s second-largest coal-producing state. Coal severance taxes dropped by about 23% in 2014 to $407 million from a peak of $530 million in 2012. In the current fiscal year, the state reported a 36% decrease in severance tax collections between July and August. Natural gas severance tax revenues, Tomblin’s administration said, are expected to continue decreasing for the remainder of the year “because of significantly lower prices.”

The state charges a 5% tax on the gross value of oil and gas, plus a 47 cent/Mcf volumetric fee. The budget cuts come at a time when lawmakers in Ohio and Pennsylvania have cited West Virginia’s severance tax structure as a possible model to follow as negotiations continue in both those states about an increase in the unconventional natural gas severance tax (see Shale Daily, June 16; Feb. 11).