Little is expected to change this election season at the local and state level for the Appalachian Basin’s energy sector, where there are few close races and no major ballot initiatives impacting oil and gas. 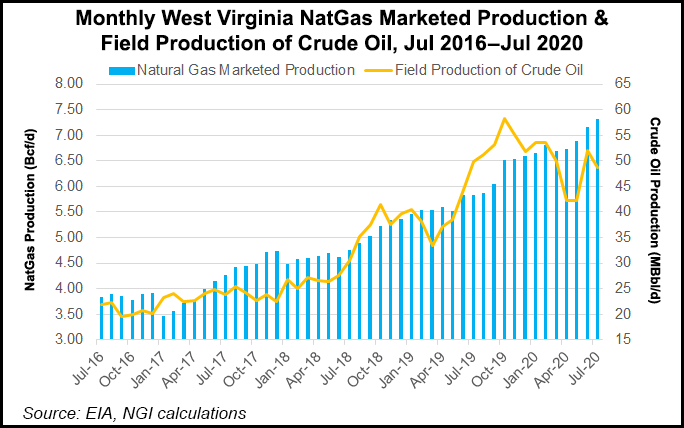 Unlike in years past, there are no high profile clashes for state legislatures, governors’ offices or closely watched referendums for more control over local oil and gas oversight. As far as the presidential race is concerned, representatives from trade groups across the basin, which produces about 33 Bcf/d of natural gas, are watching closely and stressing the need for gas to play a key role in the ongoing energy transition.

“This is a very quiet year, particularly for West Virginia politics,” said political science professor Robert Rupp of West Virginia Wesleyan College. “We really don’t have an outwardly competitive race when measured by ads, by expenditures. One of the reasons it’s a quiet race is it wasn’t the one that could have happened, the dog that could have barked.”

Progressive candidate Stephen Smith, who had canvassed West Virginia in recent years building grassroots support among liberal Democrats with a populist message, was defeated by Salango in the primary. “We thought we’d have Mr. Inside versus Mr. Outside, and we didn’t get it,” Rupp said.

West Virginia Democratic Sen. Joe Manchin, who enjoys strong support in a state that has increasingly shifted toward Republicans, has thrown his support behind Salango, which helped tip the balance during the primary.

Rupp said it appears Salango may not have the resources to mount a serious challenge against Justice. Rupp said the incumbent remains vulnerable after switching parties and facing repeated accusations of not being as actively involved as his predecessors. Justice, a billionaire with businesses in agriculture, coal mining and hospitality, was elected as a Democrat in 2016, but switched parties less than a year into his first term.

Polls show Justice leading by wide margins. In any event, both candidates support the oil and gas industry, something Rupp told NGI’s Shale Daily is “obligatory” in an extraction state like West Virginia. The state ranks fifth in overall U.S. energy production, according to the Energy Information Administration. It’s the seventh largest gas producer and second largest coal producer. Last year, state gas production reached a record 2.2 Tcf, the 11th straight year of gains, thanks largely to the Marcellus and Utica shales.

“Ben Salango has professed that he is adamantly in favor of oil and natural gas, and its further downstream development,” said executive director Charlie Burd. “He’s very supportive.”

Salango, an attorney, has pitched an economic development plan that caters to the state’s various regions. In the shale-rich region in the northern part of the state, he wants to better market resources to the world, increase gas-fired power generation and leverage petrochemical opportunities.

“Jim Justice has been an absent governor for most of his four-year term, which has caused West Virginia to miss out on key opportunities for economic development and job growth like the Brooke County Power Plant,” Salango told NGI’s Shale Daily. “That changes with me. As governor, I will work with industries like oil, gas, coal and steel while making sure I never turn my back on those who do the hard work of powering our country day in day out.”

Justice has been an advocate for the oil and gas industry too, Burd told NGI’s Shale Daily.

“He has been supportive of our industry and on several occasions has referred to natural gas as the hope for West Virginia’s energy future,” he said. “We embrace those comments, and, so far, he’s certainly adhered to that philosophy.”

Justice has signed legislation in recent years advocated by industry to become more competitive as Appalachian operators often have shale assets in Ohio and Pennsylvania. The governor’s support has allowed unconventional operators to block up more acreage, cut severance taxes for legacy producers, created downstream incentives for manufacturers that use gas and established tax credits to store natural gas liquids, among other things.

Another factor weighing heavily in the gubernatorial campaign is President Trump, who carried West Virginia by a wide margin in 2016 and is expected to do so again this year.

“That’s probably another asset for the governor is his strong endorsement from Trump,” Rupp said.