A West Virginia county has changed course and will now pay overtime to employees in the county clerk’s office for extended hours to allow increased access to public records for Marcellus Shale development. 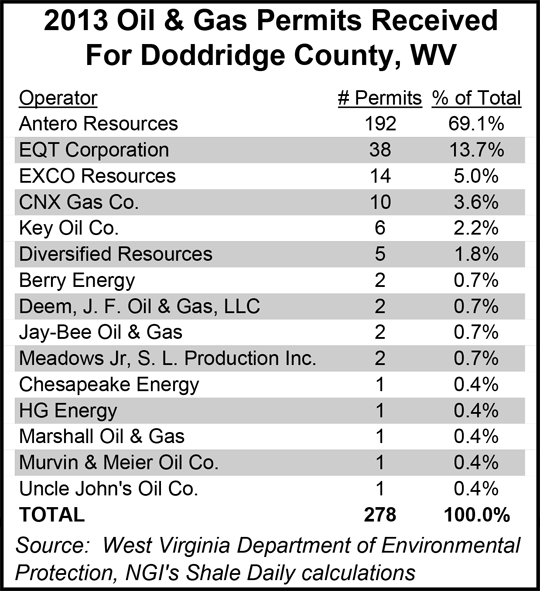 According to a report by the Associated Press, a state audit found that “an outside party in the oil and gas industry” had been financing the overtime of employees in the Doddridge County Clerk’s Office. The report did not identify the industry financiers or say when Doddridge officials made the change.

Doddridge County Commissioner Gregory Robinson told NGI’s Shale Daily that the “outside party” was either an attorney representing an oil and gas company, or a company itself, that paid employees in the county clerk’s office directly.

“What happened was the attorney or the company — I’m not sure which it was because I never saw the checks — requested that the county clerk extend the hours past the normal closing time,” Robinson said Tuesday. “It’s my understanding that what was done, the employees were paid directly; it wasn’t included in the county employees’ wages.”

Robinson said the county clerk’s office changed its reimbursement policy around September or October 2013, two or three months after the state attorney general’s office issued an opinion on a similar issue in neighboring Tyler County.

According to the state, Tyler officials described their county courthouse facilities as “grossly inadequate” to handle the increased demand for public records related to Marcellus oil and gas development, and they asked for advice on the best way to allow more access.

Specifically, Tyler officials asked if it was permissible for the county to accept private funds to provide extended hours of operation to the courthouse and record room, or to digitize county records.

“As a threshold matter, it is clear that the [Tyler County] Commission may accept a monetary donation from private entities for the extended operation of the courthouse and/or for the digitization of county records, so long as the donation is given to the commission or county as a whole and not to any individual county official or employee,” Morrisey and Wright said in a letter dated July 11 to Tyler County Prosecutor Luke Furbee. “One further restriction is that any monetary donation should probably not be solicited.”

But Morrisey and Wright said Tyler officials should not give a private individual or entity exclusive access to public records.

“If the exclusive access [was] tied to the payment of a donation, the access would clearly constitute a prohibited quid pro quo,” Morrissey and Wright said. “Thus, if the commission or county clerk establishes longer office hours and/or makes records available after typical public hours, the county should allow the public at large to have equal access during the extended availability.”

Robinson said employees in the Doddridge County Clerk’s Office work 32.5 hours a week. He said he assumed the employees would be paid overtime after working beyond 40 hours a week.

“The payment for staying those hours is through the county,” Robinson said. “We also have a comp time policy if they work additional hours.”

Robinson added that once the county clerk’s office changed its reimbursement policy, the change in hours was advertised in the local newspaper.

“I don’t know that any individual ever took advantage of the extended hours beforehand, but there would never have been any situation where a citizen would have been refused if they had been out there,” Robinson said.

Doddridge is one of 11 counties in the northern part of West Virginia with a concentration of drilling targeting the Marcellus Shale (see Shale Daily, Nov. 27, 2013). The county is also the site of the Sherwood processing complex, which is owned and operated by MarkWest Energy Partners LP. Expansions at Sherwood will give the facility 1 Bcf/d of total capacity by the end of 2014 (see Shale Daily, Nov. 8, 2013).

The West Virginia Department of Environmental Protection (DEP) received a total of 278 oil and gas permit applications for Doddridge County in 2013, with 192 (69.1%) of them for Antero Resources, according to DEP data.