West Virginia is once again grappling with a budget shortfall as severance tax collections have so far missed the mark this fiscal year, which began in July, as natural gas prices stagnate and coal demand remains lackluster. 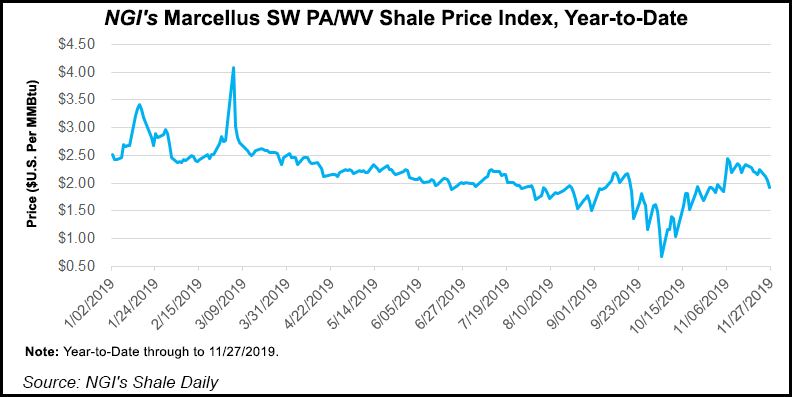 The nation’s seventh largest natural gas producer and second largest coal producer had seen its fortunes reverse in recent years, in part as oil and gas prices rebounded from lows of the 2014-2016 commodities downturn.

However, in recent testimony before state legislators on an interim government and finance committee, Deputy Revenue Secretary Mark Muchow reportedly attributed the latest decline in revenue collections to a glut of natural gas, growing stockpiles of coal at power plants and weak demand for metallurgical coal in the steel industry.

Personal income tax collections have been hit hard too as activity in the gas patch slows down, with fewer pipeline projects now under construction, Muchow said. Producers in the Appalachian Basin, meanwhile, are cutting spending, while some have reduced workforces in response to lower prices and demand from investors seeking better returns.

The state showed a $33 million gap between estimated and actual revenue collections from July to October. The state collected $1.5 billion over the period and is about $25.5 million below the same period a year ago.

West Virginia produced nearly 2 Tcf of gas last year, or about 20% more than in 2017. While production across Appalachia is poised to slow down as operators curb activity and a pipeline buildout comes to a close, production is still expected to increase modestly.

Dry gas production is expected to remain strong through the end of 2019, reaching an average 92.1 Bcf/d, a 10% increase from the 2018 average, according to the Energy Information Administration’s latest Short-Term Energy Outlook. Production from the Appalachian Basin is more than 33 Bcf/d, thanks largely to Marcellus and Utica Shale production in Ohio, Pennsylvania and West Virginia.

While spot prices in parts of the country have shown some life as of late with colder weather on the way, the forward curve has slipped. The January Nymex gas futures contract settled last Wednesday at $2.501/MMBtu. The February contract settled at $2.470. Prices through the remainder of the winter look weak as well.

In October, as the state has in the past during similar stretches of volatile commodity prices, West Virginia Gov. Jim Justice asked state agencies to find $100 million of possible spending cuts.