Magnum Hunter Resources Corp. on Tuesday announced a deal to sell 5,210 net acres in Tyler County, WV, to an undisclosed operator, checking-off one item on a long list it has been working on to generate more cash and jump-start its idled operations in the Appalachian Basin. 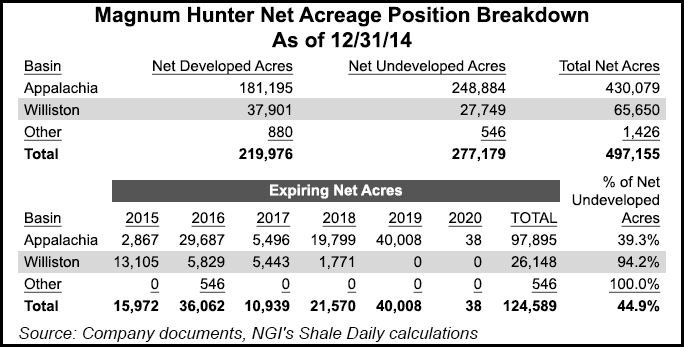 The sale is the company’s first significant divestiture since announcing a broader plan earlier this year to monetize assets and shore-up its weak liquidity position (see Shale Daily, May 11).

Magnum said the West Virginia acreage sale would likely net it $40.8 million after adjustments related to existing leases on the properties. CEO Gary Evans said the properties are undeveloped and are not in the company’s long-term drilling plan for the area. The sale represents less than 3% of Magnum’s 210,000 net acre position in Ohio and West Virginia.

Evans added that with leases expiring on a large portion of the acreage position, “it made sense to sell these properties now to an industry competitor that already owns adjacent leases.”

In January, Magnum said it would explore selling a minority interest in midstream subsidiary Eureka Hunter LLC for up $75 million, and it has been working on finalizing a joint venture for a portion of its 130,000 net acres in Ohio that could earn it about $450 million in drilling carry (see Shale Daily, Jan. 23). While Magnum has consistently said it would sell its remaining acreage in North Dakota, Evans added earlier this month that it was marketing about 5,000 net acres in the Appalachian Basin. At the time, he said other land sales in the area would be likely later in the year.

Despite millions in asset sales and exits from other major shale fields across the country in recent years to focus on growing its position in the Appalachian Basin, the company has since suspended its operations there to ease a cash crunch (see Shale Daily, March 2; Aug. 11, 2014).

While Magnum has budgeted $100 million this year, it had total liquidity of just $20.7 million at the end of the first quarter, of which $14.4 million was cash and $5.7 million was available under its credit facility.