Natural gas bulls and bears duked it out in a split decision Tuesday as futures held steady after testing both sides of even. In the physical markets, at least one West Texas seller paid to get its gas out of the constrained region as reports of negative spot prices emerged for a second straight day; the NGI National Spot Gas Average climbed 5.0 cents to $4.345/MMBtu. 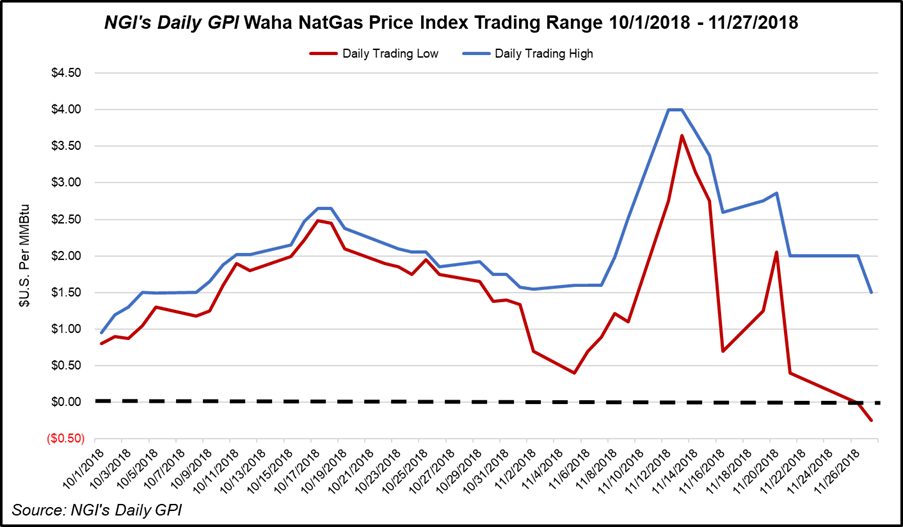 Forecasts for milder conditions developing toward mid-December could be weighing on prices, even with some of the coldest temperatures of the winter so far expected to move in next week, according to NatGasWeather. Cold blasts are expected to linger through Dec. 10 and exit the East Coast last.

“However, most of the midday data continues to suggest a milder break will set up and span much of the country Dec. 11-14 as high pressure gains in coverage and strength,” NatGasWeather said. The forecaster cautioned that the Dec. 11-14 pattern is “quite far out, and it’s not impossible cold lingers longer than expected over the East, like it’s done several times with previous cold outbreaks in recent weeks. Overall, we see weather patterns as at least somewhat bullish.”

The forecaster said it sees production growth and the expiration of options and futures this week as likely having more to do with recent selling than forecasts. Until the December contract goes off the board “trade could be more about major players repositioning, with weather patterns again becoming the primary factor after. That is unless notable colder trends were to materialize in the data over the next 12-24 hours, especially if cold was able to prove it might linger longer into Dec. 11-14.”

In the short-term, Genscape Inc. forecasts showed national demand remaining strong for the rest of this week, with nationally weighted heating degree days (HDD) expected to run colder than normal through Thursday. Tuesday and Wednesday were expected to be the coldest, with those days coming in around 212 HDD versus a norm of 162 HDD.

“Nearly the entirety of the cold remains east of the Mississippi,” Genscape senior natural gas analyst Rick Margolin said. “Following Thursday, national temps are forecast to run near normal until Dec. 5, after which another burst of cold is possible. Demand remains above the 90 Bcf/d mark through Wednesday, after which a slight regression with milder temps and the weekend will bring our estimate to a low of 73.5 Bcf/d by Sunday.

“After that, however, another forecast round of cold is expected for the week following, which is generating forecast demand estimates over 100 Bcf/d for the first time this winter. Last year, the 100 Bcf/d mark was not cracked until late December.”

Meanwhile, Genscape’s Spring Rock daily production estimates showed production climbed above 86 Bcf/d last Thursday for the first time since the end of October, according to Margolin.

“Since Thursday, production has averaged 86.35 Bcf/d, a 0.98 Bcf/d increase over the prior 30-day average. Texas alone accounts for nearly 0.74 Bcf/d of that growth, along with more than 0.2 Bcf/d higher output from the Northeast and Permian Basin, and 0.19 Bcf/d of growth out of the Rockies (principally the Denver-Julesburg Basin and the Bakken Shale).”

The spot price woes observed in West Texas Monday worsened in Tuesday’s trading, with at least one reported transaction plunging even further into negative territory as constraints in the Permian Basin appear dire enough that some sellers are willing to offload their gas for free or even pay to have it taken off their hands.

Average prices at Waha inched 2.5 cents higher to 65.0 cents, but the lowest price recorded at the hub Tuesday was negative 25 cents, the second straight day of negative prices this week in West Texas. At Transwestern and El Paso Permian, the lowest prices recorded were 0.0 cents. El Paso Permian averaged 63.5 cents (down 14.5 cents), while Transwestern averaged 25.5 cents (up 7.5 cents).

Natural gas pricing conditions might not improve anytime soon for Permian producers, according to analysts.

“Permian natural gas markets felt a cold shiver this week, but not a meteorologically induced one of the types running through other regional markets,” RBN Energy LLC analyst Jason Ferguson wrote Tuesday. “Gas marketers braced as prices for Permian natural gas skidded toward a new threshold: zero! That’s not basis, but absolute price, a long-anticipated possibility that became reality on Monday.

“The cause is very likely driven, in our view, by continued associated gas production growth poured into a region that won’t see new greenfield pipeline capacity for at least 10 months. What happens next isn’t clear, but expect Permian gas market participants to be a little excitable or jittery over the next few months.”

The daily averages recorded at regional hubs like Waha and El Paso Permian plummeted Monday, but that didn’t capture the full reality of the low prices in the region, where some trades went as low as negative 1.0 cent. That marked the first time NGI has ever recorded negative spot prices in the United States, a sign of severe constraints the likes of which had previously only been observed in Western Canada.

“That’s right, someone was paid to buy gas in the Permian on Monday,” Ferguson said, referring to NGI’s pricing data. “While we’d like to tell you this was some sort of transient, one-off event that led to a day of dramatically low gas prices, that isn’t likely the truth of the matter.

“The Permian gas market is flooded with associated gas and won’t see significant new takeaway capacity until the start-up of Kinder Morgan’s Gulf Coast Express pipeline in late 2019. The problem is here to stay, at least for a few months. Take a deep breath if you trade the Permian gas markets.”

The heavy downward pressure on West Texas spot prices has indeed been an ongoing issue, and prices came close to negative territory prior to this week, Daily GPI historical data show. Transwestern traded as low as 5.0 cents on Nov. 2, and wide negative basis differentials have been the norm in the region for months.

Ferguson said there were no posted maintenance events for interstate pipelines that would explain the recent collapse in Permian pricing. He said the largest fundamental factor behind the recent trends could be Plains All American’s Sunrise crude expansion, which recently increased oil takeaway from the Permian by around 300,000-350,000 b/d and could be driving growth in associated gas volumes.

“By our estimate, November natural gas volumes are currently around 8.8 Bcf/d and are set to increase another 0.2 Bcf/d in December, but that estimate could prove low based on our understanding of the potential impact from Sunrise,” the analyst said. “Even at just 0.2 Bcf/d, that’s more than enough new supply to overwhelm the one brownfield takeaway project coming in December — the 0.16 Bcf/d Old Ocean project under construction by Energy Transfer and Enterprise Products Partners.”

Elsewhere in the spot market Tuesday, a number of East Coast points strengthened amid chilly conditions across the region this week.

A strong cold blast was expected to continue impacting the northern and eastern United States through Thursday, bringing temperatures as low as 0-20 degrees across the Great Lakes, Ohio Valley and Northeast, with temperatures in the 20s and 30s down into the Southeast, according to NatGasWeather.

“Warm high pressure will strengthen across the central and southern U.S. the next few days, then expanding across the East this weekend, with highs warming into the 50s to 70s for light demand,” the forecaster said Tuesday. “The West will see rain into the coast and spreading inland with additional systems to follow.”

Prices moderated across the Midwest and Midcontinent Tuesday. Joliet dropped 8.5 cents to $4.265, while Northern Natural Ventura shed 10.0 cents to $4.270.

In the Pacific Northwest, volatility in the wake of last month’s pipeline rupture on Enbridge Inc.’s Westcoast system continued at Northwest Sumas. The point, which has seen elevated pricing coinciding with restrictions on southbound flows on Westcoast in British Columbia, added $1.140 to average $11.770 Tuesday.

Enbridge notified shippers that it was expecting capacity through the Huntingdon Delivery Area to total just above 1.1 million GJ for Wednesday and Thursday, in line with the capacity listed for Tuesday’s gas day.

Mexico natural gas prices jumped to $3.74/MMBtu in May compared to April prices of $3.38 and year-ago prices of $2.37, according to the latest IPGN monthly index published by the Comisión Reguladora de Energía (CRE). The May prices were the highest monthly prices reported in Mexico in the last 12 months, with the exception of…