The Permian Basin in West Texas has been chosen to site the world’s largest direct air capture (DAC) and sequestration facility, according to Occidental Petroleum Corp. (Oxy) and Carbon Engineering Ltd. (CE). 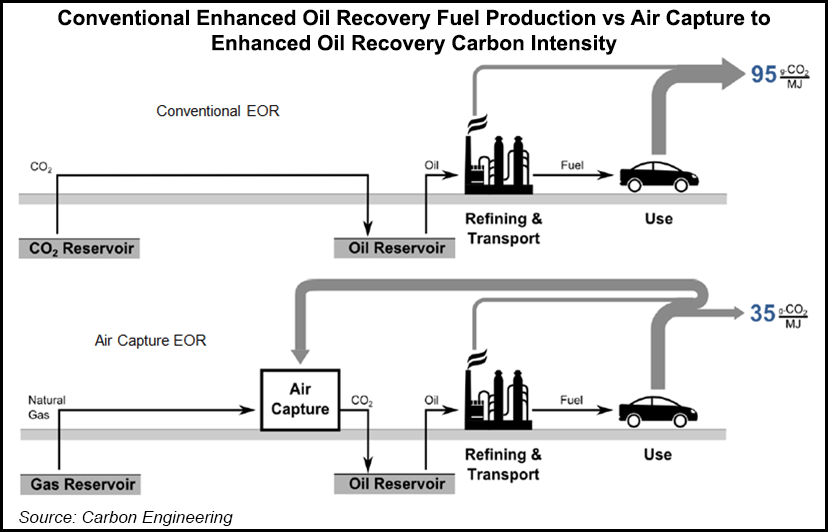 The CO2 would be used in Oxy’s massive enhanced oil recovery operations in the Permian and then be stored permanently underground.

“Using atmospheric CO2 for oil recovery greatly reduces the net addition of CO2 to the atmosphere from oil production and fuel use, and opens a pathway to producing fully carbon-neutral or even net-negative fuels,” OLCV President Richard Jackson said.

CE CEO Stee Oldham said including other mitigation solutions, “carbon removal technologies like DAC are going to be essential if we hope to decarbonize in time to avoid the worst impacts of climate change.

“These carbon removal technologies need to be deployed widely and at large enough scales to be climate-relevant. This project, the largest DAC-sequestration plant in the world, is therefore a huge step forward in demonstrating the readiness of large-scale atmospheric carbon removal, and in accelerating efforts to bring global emissions down to net-zero, and eventually to net negative.”

The proposed project would begin with one DAC plant and eventually expand to multiple facilities, each capable of capturing 1 megatonne/year of atmospheric CO2. If the initial plant is approved by the partners, construction could begin in 2021, with the facility operational within two years.