After a volatile start to the year, natural gas forward prices quieted down during the Feb. 7-13 period as mild weather hit much of the United States. 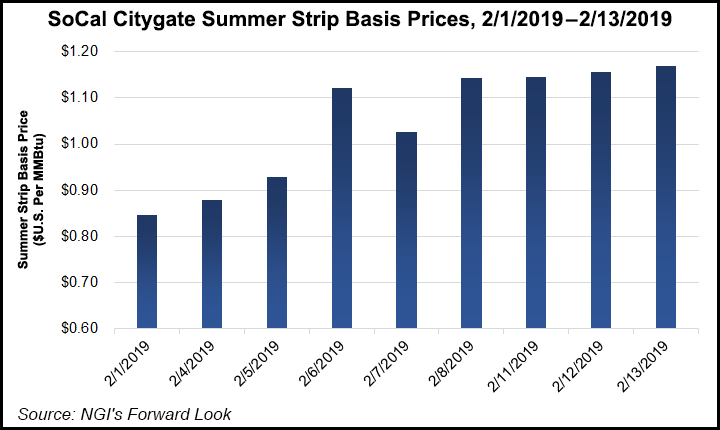 While the March contract jumped an average 18 cents, that was mostly due to substantial gains in western markets, where strong demand and various supply restrictions led to wild swings throughout the week. Most other pricing hubs across the country posted increases of a nickel or so, according to NGI’s Forward Look.

It was the second week in a row that Rockies prices experienced this level of volatility, but before this month, such extreme swings had not been seen since the fall, following an explosion on Enbridge Inc.’s Westcoast Transmission.

While much of that flow capacity has been restored, demand has been strong in Canada and has led to increased volatility as downstream Pacific Northwest markets, which are seeing the highest demand marks for February since 2014, aim to incentivize gas flows.

Net imports to the Pacific Northwest are averaging around 2.55 Bcf/d this month-to-date, about 0.5 Bcf/d above last February and the average of the prior three years, according to Genscape Inc. Meanwhile, Northwest Pipeline has been flowing at around 90% of capacity, and as of the Feb. 9-10 weekend, was also limiting withdrawal capacity from the Jackson Prairie storage facility to 485 MMcf/d.

In the previous five winters, only about 8% of days posted withdrawals in excess of the 485 MMcf/d mark, Genscape said. This winter to date has remained true to that form, withdrawing more than that only 8% of the time.

Most of this winter’s withdrawal-heavy days have come in the last week, however. Furthermore, the wintry conditions have resulted in additional freeze-offs in the Rockies, with analysts estimating that freeze-offs have ramped back up to more than 0.6 Bcf/d as of Thursday.

Over in California, demand has eased somewhat but remains higher than normal. SoCal Citygate March prices climbed 99 cents to $4.725, April edged up 9 cents to $3.309 and the summer jumped 20 cents, according to Forward Look.

The sharper increases in SoCal Citygate’s summer strip — that have occurred for two consecutive weeks now — stem from ongoing repairs to an above-ground pipe at the Aliso Canyon storage facility that has limited withdrawal capacity by 420 MMcf/d.

Nevertheless, Southern California Gas (SoCalGas) announced last Sunday that it withdrew more than 3.1 Bcf from Aliso Canyon from Feb. 4-9. Its total storage inventory, including the three non-Aliso storage fields, dropped by roughly 5.1 Bcf during that same time, meaning that Aliso accounted for slightly more than 60% of those withdrawals, according to Genscape.

Outside of the West, most markets were somewhat of a snoozefest considering that February is typically one of the coldest months of the winter season. The small increases were in line with Nymex futures, where the March contract inched up just 2.4 cents during that time to $2.575, April tacked on 4.9 cents to $2.621 and the summer strip rose a nickel to $2.73.

The stable pricing comes as weather models struggle to determine whether more cold will arrive before month’s end. A winter storm is expected to hit the Midwest beginning Friday and then move into the East during the weekend, with chilly air lingering through the middle of next week, according to forecasts. But then mild high pressure is expected to build across the southern and eastern United States with highs of 50s to 80s returning, and the warmest conditions over the South, NatGasWeather said.

The midday Thursday weather data held onto those milder trends for late next week through Feb. 26, with the primary cause being a stronger and milder ridge over the East, the firm said. Much of the data favors cold returning across the East Feb. 27-March 1, while remaining chilly over much of the rest of the country for a swing back to strong national demand.

DTN meteorologist Steve Strum said he has very high confidence in cold returning to the central/western United States for the last few days of the month, and while he thinks the cold eventually spreads east, “how soon remains unclear.

“I wouldn’t be surprised if the 11-15 ends up colder across the East than currently indicated,” Strum said on Enelyst, an energy chat room hosted by The Desk. “But the pattern is remarkably persistent. I think the first half of March is cold, then warms mid-month, but the timing of that is uncertain.”

Indeed, much of this winter’s weather has taken forecasters by surprise given the volatility and uncertainty in weather models. “This has has been by far the most bizarre February from a meteorological standpoint in that it’s looking like a La Nina/Epic negative Pacific North American pattern for the bulk of Month. Calgary is looking at coldest February in many years. As long as I see negative Eastern Pacific Oscillation signatures, no need to go below normal heating degree days as we approach March,” forecaster Corey Lefkof said on Enelyst.

Regardless of how the weather plays out for the remainder of winter, supply concerns have abated as storage deficits have tightened dramatically from the 700-plus levels seen in December. The Energy Information Administration (EIA) on Thursday reported a 78 Bcf withdrawal from storage stocks for the week ending Feb. 8. The reported draw was lower than the majority of estimates, but still fell within the wider range of expectations.

Inventories fell to 1,882 Bcf, just 30 Bcf below year-ago levels and 333 below the five-year average, according to EIA.

With the reported draw, the market has a “sell the rumor, buy the news” event whereby even though the number itself was not bullish, there were plenty of bearish risks and the market knew it would be bearish, according to Bespoke Weather Services.

Indeed, Genscape’s storage facility model estimated a draw of 90 Bcf, while its daily supply and demand (Daily S&D) model pegged the draw at 75 Bcf. The firm’s weekly storage estimate — an 85 Bcf draw for the reporting week — is a statistically-weighted composite of the two models.

The Daily S&D model had production on the week averaging 84.7 Bcf/d, about 0.5 Bcf/d below the previous week as maintenance and freeze-offs continued to suppress Lower 48 output. The firm’s daily pipeline production data figured freeze-offs curtailed nearly 3.1 Bcf of production that week (primarily in the Rockies).

For the storage week, supply was also impacted by a 2 Bcf/d reduction in imports from Canada with the coldest temperatures so far this winter hitting Alberta, triggering freeze-offs and holding gas back north of the border to serve sharply elevated heating demand and gas-fired generation with non-gas-fired outages, according to Genscape.

“Yet, the Lower 48 market loosened on the week as the week/week supply drops were more than outpaced by demand easing upon the departure of the previous week’s polar vortex,” Genscape senior natural gas analyst Rick Margolin said.

Total demand for the week ended Feb. 8 shows an average 92.4 Bcf/d, down more than 25 Bcf/d from the previous week. “While the obvious bulk of that drop was in the residential/commercial sector, the power and industrial sectors also posted notable week/week declines, along with reduced liquefied natural gas exports and a small drop in pipeline exports to Mexico,” Margolin said.

The EIA’s reported print sets up the market “for a bounce in anticipation of tighter numbers and more supportive balances,” according to Bespoke.

Indeed, the prompt month rose as much as 3.8 cents within a half hour or so of the EIA report. However, the Nymex March contract went on to settle Thursday at $2.573, down two-tenths of a cent. April slipped 1.1 cents to $2.61. 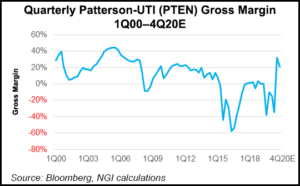