As the polar vortex that raked the county earlier this month exited this week, it left a wide assortment of market pricing in its wake. Those parts of the country hardest hit by the storm showed the greatest losses as the system dissipated this week, but sections of the gas patch in Texas, Louisiana and California showed small gains. Looking ahead to the coming week, weather forecasters were sounding the alarm Friday that the eastern half of the country might be faced with a polar vortex sequel. 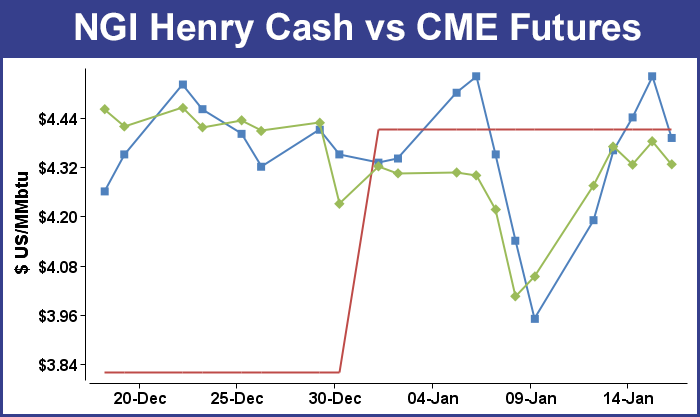 For the week ended Jan. 17, the NGI National Spot Gas Average fell 81 cents to $4.59. Greatest regional gains were seen in South Louisiana with a rise of 9 cents to average $4.35 and the largest losses were posted by the Northeast, down a stout $4.44 to average $4.99.

Of individual market points St. Clair in the Midwest had the greatest gain of 40 cents to $4.91 and Dominion was right behind with a rise of 39 cents to $4.21. The dubious distinction of the week’s greatest loser was Transco Zone 5 falling $16.55 to average $5.84. Just last week, in the heart of polar vortex number one, Transco Zone 5 posted the highest trade ever recorded by NGI at a whopping $99.00 on Jan. 6.

February futures for the five trading days ended Jan. 17 gained 27.3 cents to $4.326 after digesting an all-time record withdrawal from storage on Thursday for the week ended Jan. 10.

On Thursday market watchers were waiting on the edge of their seats for the Energy Information Administration storage report that was anticipated to be the largest withdrawal on record by a wide margin. Market pundits had been expecting a titanic draw for the week ending Jan. 10, but the actual figure came in at 287 Bcf, just a touch more than the previous record established a month earlier at 285 Bcf. Estimates included Ritterbusch and Associates at 302 Bcf and IAF Advisors at 309 Bcf. Bentek Energy was expecting a pull of 301 Bcf. Last year, 156 Bcf was withdrawn, and the five-year average is for a 159 Bcf decline.

The actual figure, while still a record, caught a few by surprise. Tim Evans of Citi Futures Perspective said, “The miss suggests that the overall impact of well freeze-offs and extra heating demand were less than most had calculated. The overall outlook remains bullish, with plenty of heating demand forecast for the balance of the month, and so we would expect the downside price reaction to prove limited.”

By Friday, forecasts for the coming week were front and center on traders’ radar as the potential for a polar vortex number two came into focus.

In Friday’s trading gas for weekend and Monday delivery showed losses at most points, but a few points in the East and Northeast skewed the market with multi-dollar gains as traders loaded up ahead of snowy and blustery conditions expected early in the week.

Points in the Northeast showed the greatest gains, jumping to or even above $20, but Mid-Atlantic locations were also firm. Double-digit losses showed up in the Gulf, Midcontinent and Rockies. At the close of futures trading, February had eased 5.6 cents to $4.326 and March was down by 6.5 cents to $4.259. February crude oil added 41 cents to $94.37/bbl.

Futures traders saw the day’s settlement as indicating a soft tone to the market. “The market never really got much above where it settled Thursday [$4.382 was February’s close] so going into the close traders gave up the ghost at the end of the week,” said a New York floor trader.

“This is an OK close, but it would have been better if it could have closed above $4.33. It’s not a strongly supportive close, puts a damper on the upside and adds a little weight to the market,” he said.

Closing prices may get somewhat firmer during the week if forecast brutally cold weather shows up. When the polar vortex first arrived earlier this month, it drove record natural gas demand, prompted constraints on pipelines into New England and hampered delivery of other fuels, and now forecasters say the arctic cyclone could make a return appearance before the end of January.

“As the pattern responsible for rounds of nuisance snow and waves of cold air continues into next week, indications are that bitterly cold air will return later in the month courtesy of the polar vortex,” said Accuweather.com’s Alex Sosnowski. The polar vortex is expected to strengthen and move farther south later this month, bringing frigid temperatures to the Midwest and East, the meteorologist said Friday.

“There is the chance the cold may rival that of early January in some areas,” he said.

Traders suggested any additional cold was already in the market. “We are maintaining a trading theme that this week’s dramatic price rebound has fully priced in some unusually cold temperature patterns that will be covering the eastern half of the U.S. through virtually the entirety of the coming two-week period,” said Jim Ritterbusch of Ritterbusch and Associates.

“But we have also noted that the below-normal trends are likely to fall significantly short of the record temps seen early last week that drove yesterday’s record storage reduction. From here, the next significant price move will await next week when the market will be forced to digest updates to the temperature forecasts following an extended holiday weekend at many plants and factories. This could downsize industrial offtake to some extent while placing some downside pressures on a next day spot market that lifted to as high as $4.55 [Thursday].”

Forecasters over the weekend were calling for a round of cold and snow for not only the East but also the Midwest and Ohio Valley. “The second in a round of clipper systems is expected to bring snow to the northeastern tier of the country into Friday night,” said AccuWeather.com meteorologist Courtney Spamer.

“A low in northern Michigan early Friday will dive south and eastward into the eastern Great Lakes and Northeast before potentially causing a snowstorm in the Northeast by the weekend. As of Thursday evening, nearly four inches of snow fell on Marion, IN, according to a trained spotter. In Leipsic, OH, 2.5 inches also fell. The storm moved further east Friday morning and brought snow to the interior Northeast, including Pittsburgh and Buffalo during the day.

Points in the Mid-Atlantic were also bitten by the high-price bug, but temperatures were expected to recover from Saturday lows heading into Monday. AccuWeather.com predicted that the high in Philadelphia Friday of 47 would dip to 37 on Saturday before recovering to 41 by Monday. The normal high in Philadelphia is 40. Baltimore’s Friday high of 43 was anticipated to drop to 34 Saturday before making it back up to 48 on Monday. The seasonal high in Baltimore is 41. Washington, DC’s 46 high Friday was seen sliding to 36 Saturday but then rebounding to 47 on Monday. The normal high in the nation’s capitol is 43.

The National Weather Service in Baltimore said on Friday that “a strong cold front associated with a clipper system will move through the area [Friday night]. High pressure will again return briefly Saturday before the next clipper system moves through Saturday night. Additional weak disturbances may pass through the middle-Atlantic region during the first half of next week. After a mild start on Monday to the work week…a cold front will pass by on Tuesday and usher in a return to colder conditions that will continue through the end of the week.”

Longer term weather forecasts turned colder overnight. WSI Corp. in its Friday morning six- to 10-day outlook showed below to much below normal temperatures east of a line running from North Dakota to Louisiana. West of that line is anticipated to be normal to above normal.

“[Friday’s] forecast has trended much colder over the Midwest in through the Ohio Valley during the latter half of the period when compared to the previous forecast. Confidence is considered just average as a result of fair large-scale model agreement with embedded localized differences.

In a Friday morning note to clients, Genscape reported increased supply and increased demand in eastern markets. “As temperatures in the Southeast Mid-Atlantic region begin to drop, demand is starting to increase again with a weekly average of 14.33 Bcf/d [but still] down 3.61 Bcf/d from last week’s high of 17.94 Bcf/d. Appalachia production has increased +0.27 Bcf/d to 13.07 Bcf/d from last week’s 12.80 Bcf/d due to better weather conditions.”

Natural gas storage inventories now stand at 2,530 Bcf and are 659 Bcf less than last year and 443 Bcf below the five-year average. In the East Region 149 Bcf were withdrawn and in the West Region 31 Bcf were pulled. Inventories in the Producing Region fell by 107 Bcf. The Producing region salt cavern storage figure dropped by 48 Bcf from the previous week to 211 Bcf, while the non-salt cavern figure fell by 58 Bcf to 701 Bcf.