Overall, weekly natural gas prices were off a penny to average $3.57 for the week ending Dec. 12, but you would have a hard time convincing most Northeast traders. Most points nationally experienced losses of a few pennies to a dime, except for in the Northeast, which saw gains with the regional average adding 24 cents to $3.69. 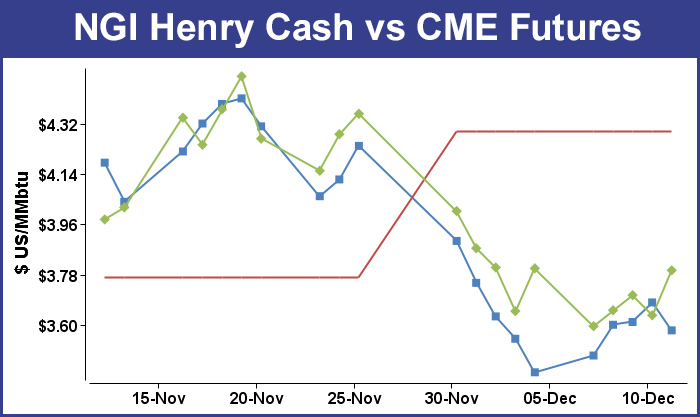 Of the actively traded points Algonquin Citygates came out on top with a rise of 81 cents to average $7.04 and Tennessee Zone 5 200 L was not far behind adding 75 cents to $4.25. At the low end of the scale were Kingsgate and Northwest Sumas both losing 42 cents to $3.18 and $3.33, respectively.

Regionally the Rockies turned in the weakest performance in losing 22 cents to average $3.37, and both the Midcontinent and California followed with losses of 15 cents to $3.45 and $3.71, respectively.

January futures gave up less than a penny for the week, dropping seven-tenths of a cent to $3.795 after trading as low as $3.585 earlier in the week. Prices were temporarily buoyed Thursday after the Energy Information Administration reported that for the week ending Dec. 5, 51 Bcf was withdrawn from storage, about 11 Bcf more than what traders were expecting. January futures rose to a high of $3.778 Thursday after the number was released and by 10:45 EST January was trading at $3.758, up 5.2 cents from Wednesday’s settlement. Prices faded at the close Thursday, however, and January settled 7.2 cents lower at $3.634.

Prior to the release of the data analysts were looking for a decrease of about 40 Bcf. An analysis by industry consultant Genscape revealed a pull of 42 Bcf, and IAF Advisor analysts calculated a 40 Bcf decline. Industry consultant Bentek Energy utilizing its flow model anticipated a withdrawal of 41 Bcf.

“This move looks like profit-taking by the shorts,” said a New York floor trader. “It’s an excuse to get out of the market if you are a nervous short,” he said.

The trader added that he didn’t think this was new buying. “I think it would be a little brave for anyone to get long on this report, but there is likely money being pulled off the table.”

Inventories now stand at 3,359 Bcf and are 186 Bcf less than last year and 351 Bcf below the five-year average. In the East Region 50 Bcf were withdrawn and the West Region saw inventories fall 8 Bcf. Stocks in the Producing Region rose by 7 Bcf.

Futures traders question whether the Friday 16 cent surge can be maintained given little confirmation of a colder temperature outlook. “[Friday’s] strong 4% up-spike was largely driven by some shifts in some private forecasts suggestive of a temperature cool down beyond next week. Additionally, shorts have been looking for a reason to accept some profits ahead of a weekend that could bring some more meaningful adjustments to the temperature views, said Jim Ritterbusch of Ritterbusch and Associates in closing comments Friday.

“Thus far, we are still not seeing any colder than normal expectations on the horizon and until such a view acquires consensus, much of today’s advance could be offset. Regardless, at least 2 more sharply downsized storage withdrawals per the EIA similar in size to yesterday’s 51 Bcf drop may require some additional discounting that could also limit further price advances. Nonetheless, we will be reluctant to consider the short side until nearby values approach the $4 area, a region where risk/reward ratios will be more appropriate to a bearish strategy. We feel that it is premature to rule out a downside test of the $3.55 area even allowing for some temperature normalization. Finally, the time spreads strengthened in conjunction with today’s price pop and we will suggest maintaining any deferred bull spreads within the spring-fall portion of next year’s structure.”

Others saw the day’s gains as destiny. “Ultimately you will see higher prices in natgas. It was just a question of when traders were going to pull the trigger,” said a New York floor trader.

On a more fundamental note in its morning outlook, Natgasweather.com said Thursday’s storage report will not be able to hold a candle to upcoming storage reports expected to make significant inroads to the short- and long-term storage shortfalls.

“Deficits were able to gain 20 Bcf on supplies, but it will pale in comparison to the impressive amount of ground that will be made up when next week’s draw comes in significantly lighter than the five-year average. These light draws are clearly bearish for prices, and if the string is going to end, colder temperatures would need to arrive after Dec. 22 as weather patterns until then will just not be nearly cold enough over enough of the U.S. to be significant,” the firm said.

“The weather system for next week over the Midwest will be fairly chilly, but the truly cold arctic air will remain confined over the northern U.S. We still expect how weather patterns shape up going into the last week of December very well could dictate the future direction of natgas prices. We still like colder temperatures returning sometime around or just after Dec. 22-24 as the gates holding very cold arctic air over northern Canada begin to open, although the weather models continue struggling on how much cold air the first weather system or two will tap as they track through the Midwest and Northeast. But even if the first systems fails to grab a significant amount, the next several that line up to follow will have better chances.”

The greatest declines were seen at New England locations, but losses of a few pennies to a dime were pervasive. The Rockies was one of the few regions to show some strength, adding just a few pennies. Overall, the market shed 15 cents. Futures posted double-digit gains as traders noted weather forecasts calling for a cold incursion late in the month, but few desired to hold a short position over a weekend in December. At the close, January had added 16.1 cents to $3.795 and February was higher by 15.3 cents to $3.816. January crude oil continued to post new five-year lows, plunging $2.14 to $57.81/bbl.

Weekend and Monday parcels in New England, the Mid-Atlantic, Marcellus and Appalachia all were in the loss column as power loads Monday were seen lower and peak power prices ebbed. IntercontinentalExchange reported that Monday peak power at ISO New England’s Massachusetts Hub fell $7.66 to $53.05/MWh. Peak power at the PJM West terminal eased 33 cents to $36.65/MWh.

The National Weather Service in suburban Philadelphia reported that “a persistent area of low pressure over the Canadian Maritimes will gradually move east over the weekend as high pressure from the Tennessee River valley builds over the region Sunday and Monday. A cold front is forecast to cross the middle-Atlantic region late Tuesday, followed by another area of high pressure later in the week.

“Saturday is shaping up to be a fairly nice day. We should start to see the sun break out from behind the clouds as the high to our southwest starts to push more toward the region. The gradient between the high and the departing low will still continue to be fairly tight and this means we will have some gusty winds to contend with through the afternoon. Temperatures will be slightly warmer than they were today as the air mass continues to modify. Highs will be in the low to middle 40s across the region with some 30s across the Poconos and the higher terrain of northwestern New Jersey.”

Rockies locations managed to avoid the weaker pricing seen elsewhere. On CIG Mainline, weekend and Monday gas came in 4 cents higher at $3.38, and at the Cheyenne Hub packages changed hands flat at $3.36. Gas at the Opal Plant tailgate was down a penny to $3.40, and gas on Northwest Pipeline WY added 3 cents to $3.38.