As the nationwide polar vortex was expected to lift over the weekend, weekly natural gas trading — Thursday and Friday — showed declines at a majority of pricing points across the United States. Most declines were in the neighborhood of 30 to 80 cents. 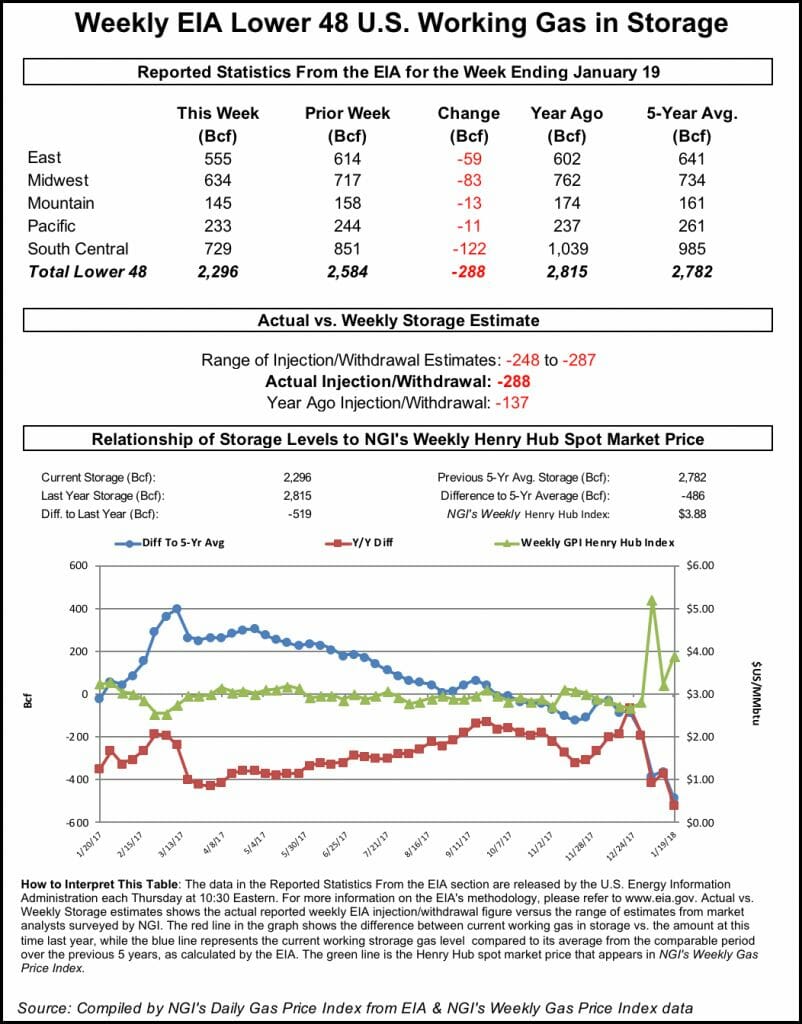 Thanks to the mid-week month switch, the two-day trading week produced a Weekly National Spot Gas Average of $2.935, down 35 cents. Over on the financial side, March natural gas futures finished Friday at $2.734, down 8 cents from Thursday’s regular session close, and 33.8 cents below the previous Friday’s finish.

Sticking out among all of the week’s physical gas price declines was much of the Northeast and Canada. Transco Zone 6 NY climbed 80 cents for the week to average $4.290, while Iroquois Zone 2 added $1.465 to average $5.700. Algonquin Citygate dropped 74 cents to $5.285.

Friday trading for weekend through Monday delivery was much the same story. Without sustained below normal temperatures, it was tough sledding for both physical and financial natural gas prices. NGI’s National Spot Gas Average for weekend and Monday delivery slipped 50.5 cents to $2.680.

Individual point declines nationally on Friday were widespread, ranging mostly from 20 cents to a few dollars. In anticipation of the weekend’s warm-up, the largest declines for the day were recorded in the Northeast, with the biggest loser at Iroquois Zone 2, which lost $5.200 to average $3.100.

Two of the hardest weather-hit regions — the Midwest and Midcontinent — saw measured price pullbacks on Friday, mostly ranging between 20 to 30 cents. Chicago Citygate came off 26.5 cents to average $2.510, while NGPL Midcontinent declined by 21 cents to $2.080.

Cash market declines in the Gulf region of Texas and Louisiana were a little more measured. Henry Hub dropped 15 cents to $2.680, while NGPL TexOk declined 14 cents to $2.525.

The Rockies and California were the only two regions where a few points showed gains, but they were mostly limited to a couple of pennies. Cheyenne hub slipped 28.5 cents to $2.270, while PG&E Citygate and SoCal Citygate were down 3 cents and 38 cents, respectively, to average $3.475 and $3.460.

Thursday’s natural gas storage report for the week ending Jan. 25 ended up not doing the bulls any favors.

“This week’s withdrawal of 173 Bcf was less than the consensus estimate of a 194 Bcf withdrawal (bearish),” J. Marshall Adkins and his team wrote in a Raymond James & Associates research note. “This implies that the market was 6.4 Bcf/d looser (bearish) than last year on a weather-adjusted basis, and it has averaged 4.6 Bcf/d looser over the past four weeks.”

“We expect 2019 should prove to be a positive year for natural gas demand as both exports to Mexico and outbound LNG tanker activity ramp up,” he added. “On the supply side, more associated gas supply is expected. However, we believe an increasing domestic gas supply and growth in renewables that are increasingly becoming more cost competitive with gas are putting further pressure on Henry Hub gas prices.”

Over in the natural gas futures’ arena, the February contract’s relatively weak expiration was partly a result of a “complete reversal” in the outlook for early February temperatures, noted EBW Analytics Group CEO Andy Weissman.

“Record-breaking cold in the immediate term, a large withdrawal” in the upcoming Energy Information Administration (EIA) storage report for the week ended Feb. 1, “and potential for very cold weather to return in late February may help support the March natural gas contract, but the broader trend for gas is likely lower as the market focuses on a bearish spring outlook,” Weissman said.

A fall-off in demand coinciding with the transition from extreme late-January cold to milder early February conditions could weaken physical prices and in turn put downward pressure on the March contract, according to the analyst.

“Although February is still likely to be a cold month overall, the warm shift breaks bullish momentum, allows salt storage to reload inventories and takes any lingering chances of a supply crunch off the table,” Weissman said. “Budding bullish momentum” from when weather models were projecting sustained cold in February has been “replaced by an ultra-warm start to the month.

“Importantly, the break allows salt storage operators — a key source of near-term supply that is helping prevent a run-up in spot prices and Nymex futures — to reload inventories,” he said. Earlier in the winter storage operators had been “more selective in releasing gas” due to larger deficits, but with the combination of more slack in inventories and warm weather in early February “salt storage operators may be more willing to offer large quantities of gas and quell bullish momentum.”

Looking further into February, current weather models are strikingly similar to models at this time last year, according to Radiant Solutions. “If you remember, we had a strong Southeast ridge that never went away, and we ended up much warmer than pre-month expectations,” meteorologist Bradley Harvey said last Wednesday on Enelyst, an energy chat room hosted by The Desk.

From a teleconnection perspective, this is very much a positive Tropical Northern Hemisphere and negative Pacific North American (PNA) regime, which can produce a warmer South and sometimes East scenario, the forecaster said. That being said, the firm said it has good reason to question the durability of this pattern.

“The tropical setup is very opposite from what we saw last year, and historical cases like this suggest the colder positive PNA as being the typical response,” Harvey said.

This indicates a lower confidence in the persistence of the pattern projected in current weather models. The setup for this year should be colder in the eastern half of the country versus what is projected in the 11-15 day models and beyond that. “That lowers our confidence,” Harvey said.

If the model holds, however, Radiant would almost certainly need to reduce its projected gas-weighted degree days for February. “But for those reasons discussed above, we are remaining skeptical of a February 2018 repeat.”

With European weather models already catching onto trends that can increase high-end cold risks through mid-February, Bespoke Weather Services said it is looking for more support at the front of the strip moving forward. Current models appear too warm in the long range given Nino climatology and eventual progression of the Madden-Julian Oscillation, and though some gas-weighted degree days have fallen off in the short term, “those can be made up by colder trends later in February.

“Additionally, the strip remains relatively supportive with March gas trading below the summer strip; with enough cold risks, we can see that at least catch more of a bid in the coming couple of weeks and potentially progress back towards the $3 level,” Bespoke chief meteorologist Jacob Meisel said.

From a technical standpoint, in its first few days as the prompt month the March contract has been testing longer-term support around $2.700-2.800, according to Powerhouse President Elaine Levin. Looking to Groundhog Day on Saturday, she noted that the natural gas bulls may need the little rodent to see his shadow this year to hold prices at this level.

If bulls fail to hold the $2.700-2.800 support area then “you’re talking about going back down to those lows toward $2.500. We’ll have to see, but it does appear that our cold weather fireworks are behind us for now. It’s a question of whether we’ll see buying off longer-term support,” Levin said. “…If we get those six more weeks of winter, we’ll get a better shot at support holding. Punxsutawney Phil to the rescue.”