It has been a summer of discontent for natural gas bulls and the market did little to change that for the week ended July 18. The NGI National Weekly Spot Gas Average fell 11 cents to $3.90. 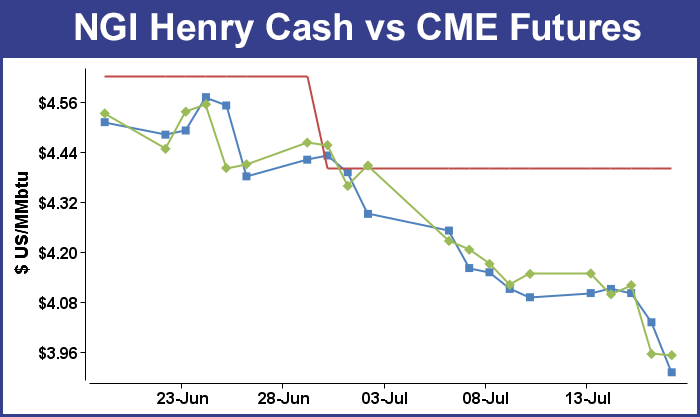 Nearly all points were in the red by about a dime, and the week’s greatest gainer proved to be Tennessee Zone 4 Marcellus with a 14 cent rise to $2.37. The week’s biggest loser turned out to be deliveries to Southern Star, off by 19 cents to average $3.89. All regions were in the red with South Texas showing the largest regional decline of 14 cents to $3.95, and the Northeast and the Midwest had the smallest decline at 9 cents apiece to average $3.01, and $4.21, respectively.

August futures broke below $4 support during the week after natural gas storage injections got back into the triple-digits following a one-week hiatus. The front-month contract tumbled 19.5 cents on the week to $3.951.

Along with a temperature regime that refused to move out of the normal camp, the big market mover was the Energy Information Administration storage report on Thursday for the week ending July 11. Market expectations were for a build of approximately 100 Bcf, but the reported injection of 107 Bcf caught everyone off guard. Once the number was released Thursday morning, the August futures dropped to a low of $3.956 and by 10:45 EDT it had recovered to only $3.975, down 14.4 cents from Wednesday’s settlement. “We were looking for a 97 Bcf to 98 Bcf build, so this was a big surprise,” said a New York floor trader. “From here you have to start looking at market support at $3.75. If the market settles below $4, that will also be big.”

“The net injection of 107 Bcf was more than expected, implying a further weakening of the background supply/demand balance, presumably on a further increase in supply. This has bearish implications for the forward data as well,” said Tim Evans of Citi Futures Perspective.

Industry pundits are by and large undecided about what a proper ending inventory is, but last year only 62 Bcf was injected, and the five-year average is for a 65 Bcf increase. This time around a more rapid refill was expected. Analysts at IAF Advisors in Houston calculated a 103 Bcf injection, and at United ICAP they were expecting a 100 Bcf build. A Reuters survey of 26 traders and analysts revealed an average 98 Bcf with a range of 86 Bcf to 107 Bcf.

Inventories now stand at 2,129 Bcf and are 608 Bcf less than last year and 727 Bcf below the 5-year average. In the East Region 65 Bcf were injected and the West Region saw inventories up by 13 Bcf. Inventories in the Producing Region rose by 29 Bcf.

Analysts see supply concerns evaporating with each weekly storage report and “as a result, storage has pulled to within 25% of five-year average levels after the deficit shrunk by an additional 42 Bcf,” said Jim Ritterbusch of Ritterbusch and Associates in closing comments Thursday to clients.

“With this deficit evaporating in large chunks as a result of an unusually cool summer thus far, supply concerns have been alleviated and a record pace of production has been brought back into focus. Furthermore, the market may need to further discount what is apt to be another huge triple-digit increase in next week’s data given this week’s sharply downsized CDDs. As bearish fundamentals dominate, the chart picture has also been deteriorating as the market easily sliced through our long-expected support at the $4.05 level. From here, next support develops at 3.92, a level unlikely to be tested until next week as the market will likely spend most of tomorrow digesting today’s large 4% loss with nearby futures expected to consolidate within about the lower one-third of today’s range,” Ritterbusch said.

“Longer term, downside possibilities now develop to about $3.75 per nearest weekly futures charts. Finally, we will note a shift to contango in the front switch, a development that is sending off additional bearish vibes. All factors considered, cool weather patterns continue to rule as this year’s mild summer has provided a major offset against a cold winter. While we still expect a price rebound on first indication of a sustainable hot spell, we will also note that the short-term temperature factor will be diminishing in importance with the passing of the August contract later this month. We will caution against attempts to pick a bottom to this sharp weather influenced decline until some evidence of chart support or a shift in the weather patterns is seen.”

Analysts also suggest that if present storage trends continue a season-ending storage inventory above 3.0 Tcf is well within the industry’s grasp. “With 9 weeks of 100+ BCF injections, the market is steadily eroding the storage deficit and outperforming expectations,” said Phillip T. Golden, director risk and product management at Energy Market Exchange. “The drop we are seeing now in the market could lead to very attractive buying opportunities for the balance of the month, pending a significant weather event. As of Week 15 of the injection season, storage has typically hit 72% of the value for the end of injection season. If this pattern were to hold, storage at the end of the 2014 storage season would be just under 3,000 Bcf. However, given recent injection trends, a number closer to 3,200 Bcf is more realistic.”

Market technicians looking for new support levels suggest that with the onset of seasonal lows, several candidates appear likely. “The epicenter of the seasonal bottoming window is 14 August. This is a mere 20 trading days away,” noted technical analyst Brian LaRose of United ICAP. Using Elliott Wave and Retracement analysis LaRose picks $3.937, $3.871 to $3.785, and $3.656 to $3.487 as likely support.

Physical natural gas for weekend and Monday delivery continued to trudge lower in Friday’s trading, partly motivated by a need to play catch-up to Thursday’s screen declines, but weather forecasts continued to call for seasonal temperatures across a broad swath of the country.

Only a single lightly traded New England point was in the black. Observers cited a lack of power load and the ability to buy weekend intraday as factors limiting the need to commit to three-day parcels. Marcellus and New England points saw the greatest declines, but the Mid-Atlantic was also soft. The market overall was down 13 cents on the day to $3.68. A week ago the average physical price was $3.90.

Physical prices may be down for the moment, but forecasters see a return to more conventional heat and humidity in the coming days. AccuWeather.com meteorologists on Friday said, “After record-challenging chill this week, temperatures will rebound to their highest level of the year so far in parts of the North Central states next week. It will feel more like summer in much of the northern Plains and the Midwest early next week.

“A forecast shift in the jet stream will set into motion a marked temperature turnaround this weekend into next week over portions of the northern Plains and Midwest. Heat that built up over the Northwest earlier this week will break off and drift into the Midwest early next week.

“Rounds of heat and humidity will continue to surge in ahead of cool fronts from the northern Plains to the Midwest through the end of July. The heat could carry more impact than a typical summer, [and] many areas over the Upper Midwest have only had a couple of days near 90 F so far this summer,” said AccuWeather.com meteorologist Paul Pastelok. The highest that temperatures have been thus far this summer has been 88 in Indianapolis, 90 in Minneapolis and 91 in Chicago. “High temperatures will approach 90 F from portions of North Dakota to Minnesota, Wisconsin, Iowa, Illinois, Michigan, Indiana and Ohio during multiple days next week.”

Temperature forecasts over the weekend, however, showed highs struggling to get close to seasonal norms. AccuWeather.com forecast that New York City’s Friday high of 82 would ease to 80 Saturday before crawling up to 83 on Monday. The seasonal high in New York is 84. Pittsburgh, PA’s Friday maximum of 79 was expected to drop to 71 Saturday before jumping to 86 Monday. The normal high in Pittsburgh mid-July is 83. Chicago’s Friday high of 73 was seen rising to 79 Saturday and jumping to 87 by Monday. The normal high in the Windy City is 84.

A Houston-based market observer said that given the day’s decline in the physical market, he didn’t know how much lower the market could go. “The market is likely at value. Algonquin Citygates is pretty weak, and there isn’t a lot of power load.”

This has truly been a weather-driven market, and if there is any hope of resurrection of the bullish case, it will need to come in the form of a late-summer heat surge capable of putting a severe dent in the current robust levels of injections. At present, that does not seem to be in the cards.

WSI Corp. said, “[Friday’s] six-10 day period forecast is fairly similar to the previous forecast. Due in part to the day shift, the forecast is a bit cooler over the northern U.S, but warmer across the South and West. Forecast confidence is considered average based on reasonably good large-scale model agreement with the overall progression of the pattern. However, models continue to diverge with some of the technical and timing details across the northern U.S.

Farther out weather patterns also struggle to offer help for the bulls. “Current model guidance suggests that the week of July 28 still appears to be below-normal for the Northeast and Midwest, with the heat held primarily in the western U.S,” said Teri Viswanath, director of commodity strategy for natural gas at BNP Paribas. “There also appears to be a tropical invest area could develop off the Southeast U.S. Atlantic coast by this Sunday, but it should stay out to sea, and if there is any development, it should be minimal.

“[C]ooler-than-normal weather across much of the nation until August will significantly reduce the potential peak cooling demand this season, with the possibility that next week will be the hottest of the season. Thanks to persistent mild summer weather, prices have dipped below $4/MMBtu with the possibility of a further deterioration as cooling demand begins to ebb,” she said.