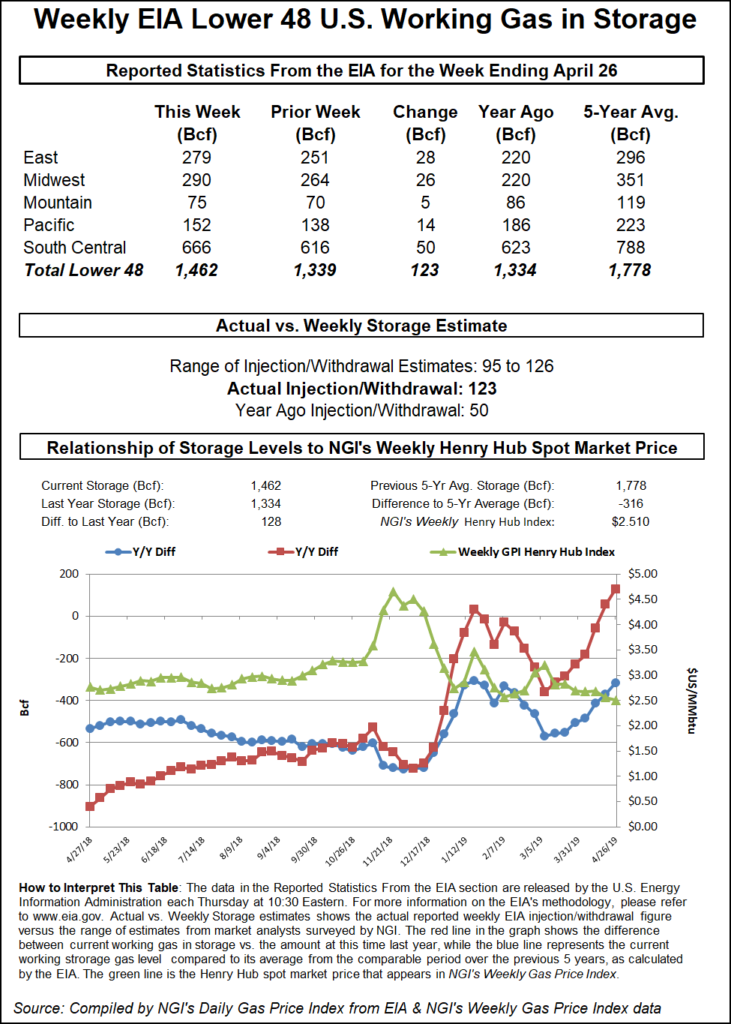 Above-normal temperatures across the South and Southeast helped spark double-digit weekly gains at points like Transco Zone 5, which added 14.0 cents to average $2.555.

Meanwhile, some chilly temperatures across the northern United States accompanied higher prices in the Midwest. Chicago Citygate picked up 14.5 cents to $2.410, while Emerson jumped 30.5 cents to $2.340.

In California, where analysts have noted storage inventories are sitting at low levels for this time of year, prices were mixed. SoCal Citygate and PG&E Citygate both posted healthy gains on the week, with PG&E Citygate up 36.0 cents to $3.280. On the flip side, SoCal Border Average slid 2.5 cents to $1.780.

A lack of weather-driven demand, combined with an exceptionally large weekly inventory build, proved too much for natural gas futures bulls to overcome Friday as prices skidded lower for a second straight session. The June Nymex futures contract settled 2.2 cents lower at $2.567 Friday after going as high as $2.611 and as low as $2.553. The front month fell 1.1 cents on the week after opening Monday at $2.578.

The midday weather data Friday continued to favor a stronger cool shot across the central and northern United States for late in the week ahead, adding back demand compared to Thursday’s data, according to NatGasWeather.

“Most of the weather data favors a very comfortable pattern across the northern U.S. May 12-18 with highs of 60s to 80s, while the southern U.S. will be warm to slightly hot with 70s to 90s,” the forecaster said. Even with recent demand additions in forecasts as of Friday “upcoming builds will continue to run larger than normal to further improve the supply picture.

“…To our view, it’s possible the weekend data adds a little demand, but likely not enough to fully end bearish weather sentiment.” Prices gained earlier in the week “seemingly for other reasons, making it difficult to know if support for prices will continue” to start the upcoming work week.

“The natural gas market continues to act as if it wants to move higher, with the June contract selling off only modestly despite a massive 123 Bcf injection” from weekly government storage data, a figure “far above market expectations or any previous April injection,” Weissman said.

This bullish sentiment could help the front month hold support early in the upcoming week, though the prospect of demand falling to “rock bottom levels” further into May paints a “bleak” picture for bulls, he said.

The 123 Bcf build for the week ended April 26 compares to just a 50 Bcf build recorded in the year-ago period and a five-year average 70 Bcf injection.

Estimates prior to Thursday’s report undershot the actual figure, even as the consensus pointed to a hefty triple-digit build. Major surveys had pointed to a build in the neighborhood of 114-116 Bcf for this week’s report, with predictions ranging from 95 Bcf up to 126 Bcf.

Selling early Thursday effectively erased a 4.5-cent rally in Wednesday’s session that came on a combination of seasonal and technical momentum. Confirmation of the large storage build from EIA seemed to arrest any momentum from the day before.

From a technical standpoint, prices saw a “bullish divergence” after bears broke below long-term support last month but failed to follow through to the downside, according to Powerhouse LLC President Elaine Levin. Seasonal trends also favor higher prices this time of year, she said.

“You have this strong seasonal where May into June tends to be a bullish time of year,” Levin told NGI. But a string of larger-than-normal injections from EIA this month could be “the one thing that could derail all of this.”

By region, the largest build came in the South Central, where IAF Advisors analyst Kyle Cooper told Enelyst chat participants demand has been “at a minimum.” The region injected 50 Bcf on the week, including 29 Bcf into nonsalt and 20 Bcf into salt stocks.

The East injected 28 Bcf for the week, while the Midwest recorded a 26 Bcf build. In the West, the Pacific and Mountain regions — where stocks sit well below five-year average levels — injected 14 Bcf and 5 Bcf, respectively.

Genscape Inc. viewed the 123 Bcf injection as about 3 Bcf/d looser than the five-year average. “It was the largest weekly build since May 2015 and the second biggest in at least the past 10 years,” senior natural gas analyst Rick Margolin said.

Analysts with Tudor, Pickering, Holt & Co. (TPH) attributed the “outsized build” in part to below average heating demand for the period, which dropped residential/commercial demand by 3.5 Bcf/d week/week.

“On a weather-adjusted basis, the market has been about 5 Bcf/d oversupplied for the balance of April, but we note demand was negatively impacted” by maintenance affecting Mexican pipeline and liquefied natural gas (LNG) export volumes during the month, TPH analysts said. “Current flow data has combined Mexican pipeline and LNG exports back in the 9.8 Bcf/d range compared to an average of 8.7 Bcf/d in April.”

TPH’s preliminary numbers for the upcoming week’s storage report “show a build much more in-line with the five-year average of 70 Bcf, as cooling demand in the south and heating demand in the north drove above-normal demand in both the power and residential/commercial sectors.”

Spot prices dropped throughout the Lower 48 Friday as forecasts called for generally comfortable temperatures in most areas.

Weather systems bringing rain and snow were expected to continue across the central and far northern United States into the upcoming week, with low temperatures ranging from the 20s to 40s, NatGasWeather said in its one- to seven-day outlook Friday.

“The southern Great Lakes, Mid-Atlantic and portions of the Northeast will see comfortable 60s and 70s, while the southern U.S. will see areas of showers but still very warm with 70s to lower 90s,” the forecaster said. The week ahead “will bring showers with cooling across the northern and central U.S., while a touch hot with 80s and 90s across the southern U.S.”

Radiant Solutions was calling for mild temperatures, mostly in the 50s and 60s, over the weekend in major Northeast cities like Boston and New York. Spot prices in the region dropped into the low-$2s range Friday. Transco Zone 6 NY eased 13.5 cents to $2.240.

Prices also fell double digits at some Midwest and Midcontinent locations. Northern Natural Ventura tumbled 14.5 cents to $2.205. In Chicago, where Radiant Solutions was calling for temperatures to average in the upper 50s to mid 60s over the weekend and into Monday, Chicago Citygate slid 7.5 cents to $2.330.

Natural Gas Pipeline Co. of America (NGPL) on Friday lifted a force majeure, declared a day earlier, that had restricted volumes on its system due to horsepower issues at its Compressor Station 167 in Lea County, NM. The force majeure had been limiting around 70 MMcf/d of Permian Basin volumes headed for markets in the Midwest, according to Genscape analyst Matthew McDowell.

Maintenance on the Westcoast Energy Inc. system is expected to “significantly disrupt” production out of British Columbia during the upcoming week, according to Genscape analyst Joe Bernardi.

“A planned five-day outage starting” Tuesday (May 7) “will cut Westcoast’s receipts by over 400 MMcf/d,” Bernardi said. “A modernization project at Compressor Station 1 in northern British Columbia will require plant outages at the McMahon and Aitken Creek plants from Tuesday through Saturday (May 11). Receipts from McMahon onto Westcoast have averaged about 405 MMcf/d in the past month.

“Since the beginning of February, McMahon plant volumes have accounted for just under 20% of all of Westcoast’s production receipts. Westcoast does not report receipt volumes directly from Aitken Creek.”