Physical gas prices for the week ended April 10 moved little, and the dominant price development was the decline in the May futures of over 20 cents to $2.511, the lowest price in 34 months. The NGI Weekly Spot Gas Average was unchanged at $2.43 and most points moved a nickel or less. 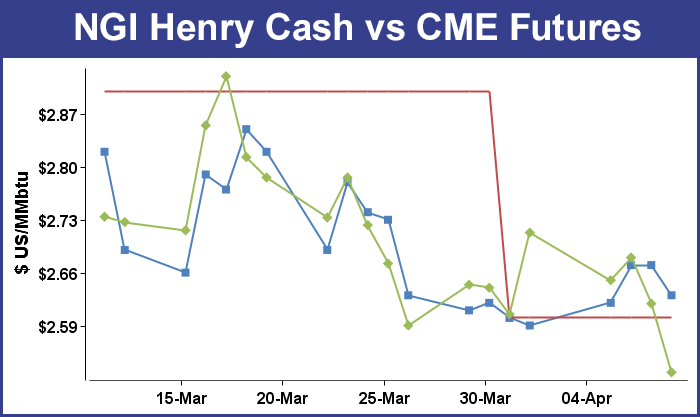 The point showing the greatest gain was Algonquin Citygates with a rise of 63 cents to $4.17 and it was followed closely by gas on Tennessee Zone 6 200 L, which added 51 cents to $4.02. The week’s greatest loser was Texas Eastern M-3 Receipt with a decline of 31 cents to $1.72.

Regionally, the Northeast lost the most, dropping 4 cents to $2.28, and the greatest gain was seen in California with a weekly advance of 7 cents to $2.55.

For the week May futures fell 20.2 cents and nearly half that decline came following Thursday’s Energy Information Administration (EIA) storage report. The report was only modestly bearish, a build of 15 Bcf compared to market expectations closer to 11 Bcf, but traders saw fit to sell early and sell often. At the close May was down 9.1 cents to $2.528 and June had fallen 8.9 cents to $2.577. The settlement of the May futures puts the natural gas market at a 34 month low.

The 10:30 a.m. EDT release of storage data was expected to show a build of about 11 Bcf. Ritterbusch and Associates calculated an 8 Bcf build, and a Reuters poll of 20 traders showed an average 11 Bcf increase with a range of +5 Bcf to +22 Bcf.

John Sodergreen, editor of Energy Metro Desk, said the “smart money is looking for a 15 Bcf draw out of the East (maybe a little less), a 20 Bcf build (at least) in the producing region and 6-7 Bcf build out west. It’s a tricky week. We expect the market to move nicely once the clock chimes 10:30 on Thursday.”

“The market kind of fell out of bed. Volume is 62,000 contracts in the May which is about average for a number day, but if we settle 2 days in a row under $2.50, that will be a bearish sign,” said a New York floor trader.

Tim Evans of Citi Futures Perspective noted that “the data follows a bullish surprise in the prior week, and so may reflect some timing issues between the two periods rather than a clear shift in the background supply/demand balance. The data also removes some risk of a bullish surprise and allows the market to focus forward again, with relatively mild temperatures pointing to larger than average storage injections later in the month.”

Inventories now stand at 1,476 Bcf and are 651 Bcf greater than last year and 173 Bcf below the 5-year average. In the East Region 18 Bcf were withdrawn and the West Region saw inventories increase by 7 Bcf. Stocks in the Producing Region rose by 26 Bcf.

Analysts see the market as somewhat in a state of angst over the balance between summer production and available storage capacity. “It is now evident that growing concerns about industry’s capacity to absorb surplus production over the summer are now pressuring prices lower,” said Teri Viswanath, director of commodity strategy at BNP Paribas. “The only question that remains is the outright levels that will be plumbed this quarter as traders come to terms with the amount of price-induced demand growth required to offset supply.”

Viswanath uses 2012 as an analog when spot futures traded as low as $1.902. “Based on the 2012 trend in prices, when similar supply concerns surfaced, futures prices put in the calendar-low in April on exaggerated stock-build expectations. However, the days of sub-$2 prices that year were limited as cooling demand and fuel-switching restricted the build in inventories in May. Will the market extract a similar discount this year in the absence of obvious storage concerns? We suspect that the answer is probably no.”

Top traders see the market honing in on their short trading objectives but caution against further sales. “The lowest levels in more than two and a half years were violated per [Thursday’s] drop to below the $2.57 level and a test of our long-stated objective at the $2.50 area is now close at hand,” said Jim Ritterbusch of Ritterbusch and Associates in closing comments Thursday. “With the weather factor unable to spur much buying interest at this time of the year, some additional declines into the $2.40-2.50 zone should not be ruled out. But we will restate that we will be shifting from a bearish to a neutral trading stance on such a development.

“[Thursday’s] injection that will likely be followed by additional sequential storage builds narrowed the supply deficit against five-year averages to 173 Bcf and we see additional contraction ahead. We will also note that current supply is about 79% above a year ago in accommodating a comparatively low pricing environment needed to attract supply to the utilities. By and large, we still see lower pricing ahead but with the market now approaching our targets, we will caution against fresh short holdings at current levels given unfavorable risk/reward ratios. And although term structure didn’t respond much to [Thursday’s] larger than expected injection [report], we still see [contango] expansion into new wide territory.”

In Friday’s trading buyers for weekend and Monday natural gas were in short supply as traders were reluctant to make purchases with temperatures forecast to rise and heating requirements looking to be minimal or nonexistent in major markets. Traders also cited the ease and convenience of making spot purchases from cell phones or electronic devices should the need arise. Only a handful of points turned positive and overall the market was down 16 cents to $2.25, with most points dropping more than a dime. The Northeast was hit the hardest with a decline of 29 cents.

Rising temperature forecasts in New England gave buyers little incentive to buy as by Monday the outlook was for well above normal readings. Forecaster AccuWeather.com predicted that Friday’s high in Boston of 53 would rise to 58 Saturday before making it to 63 Monday, a stout 9 degrees above normal. New York City’s 61 high on Friday was expected to rise to 62 Saturday and 66 on Monday. The normal early April high in New York is 59.

In the Northeast traders are more apt to be enjoying the weather than worrying about gas loads. At AccuWeather.com meteorologists said, “Following showers and thunderstorms on Friday, sunshine will return to much of the Northeast and could make for the best weekend weather of the spring so far for outdoor activities. Saturday will bring gusty breezes throughout the Northeast with conditions ranging from pleasantly cool east of the Appalachians to borderline chilly in the Appalachians of northern New England,” according to meteorologist Dave Dombek

Temperatures are forecast to rebound to near seasonable levels in the 50s across upstate New York and southern New England to the 60s in much of the mid-Atlantic during Saturday afternoon. Temperatures will climb into the 70s over much of southeastern Virginia. Saturday will be dry in most areas, but the day could start with flurries and sprinkles from northern Pennsylvania to northern New England, [and] Sunday will bring dramatic improvement in the northern tier, for those hoping to spend considerable time outdoors, where winter has held on for so long.

Weekend purchases are often somewhat more casual. “You either call suppliers or text them and say,’I need a little gas. I need it here, and what’s your price.’ They tell you and you go, ‘can you do a little better? How about a dime off that price? Well how about a nickel?’ and you go, ‘OK,'” a former physical trader said.

“That’s exactly how it works half the time. You always add a dime to the price you want to get, let ’em work you down, and you make an extra nickel. Nobody want’s to haggle. They just want to get back to the kids and the pool.”

Heating loads have all but vanished in the Midwest. According to AccuWeather.com, St. Louis averages about 10 heating degree days (HDD) daily for April, but Tuesday, Wednesday and Thursday saw no HDD accumulations for the Gateway City. Indianapolis will normally experience about 12 HDD a day for April, but a tally of Tuesday-Thursday registered only five HDD.

Friday buyers across the MISO footprint looking to secure weekend supplies had a relatively easy task ahead of them as mild temperatures and stout renewables generation looked to dominate the weekend. “A storm system and its associated rain, storm and snow will depart this morning [Friday] and high pressure will eventually build into the power pool during the next couple of days,” said WSI Corp. in its Friday morning outlook. “High pressure may slowly slide to the east as the weekend progresses and a southerly flow will support the return of above-average warmth with highs in the 60s and 70s. A fast-moving frontal system may trigger scattered showers and storms late Sunday through Monday, but fair and mild conditions may return by Tuesday.

“A west-northwest wind around the backside of a departing storm system will continue to support strong wind generation. Output may range 8-9 GW. Wind gen may drop off tonight into Saturday morning. A warm southerly flow may cause wind gen to ramp back up as the weekend progresses, which will remain elevated into early next week. Output may once again top out in excess of 8-9 GW.” 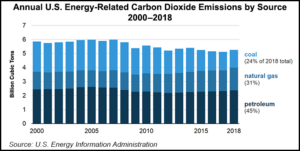