There was no shortage of news this week to drive weekly prices significantly higher, with the most impressive gains seen in recently struggling West Texas/southeastern New Mexico, as well as in Appalachia and the Rockies. When all was said and done, NGI’s National Weekly Spot Gas Avg. rose 20.5 cents from Oct. 8-12 to $3.005. 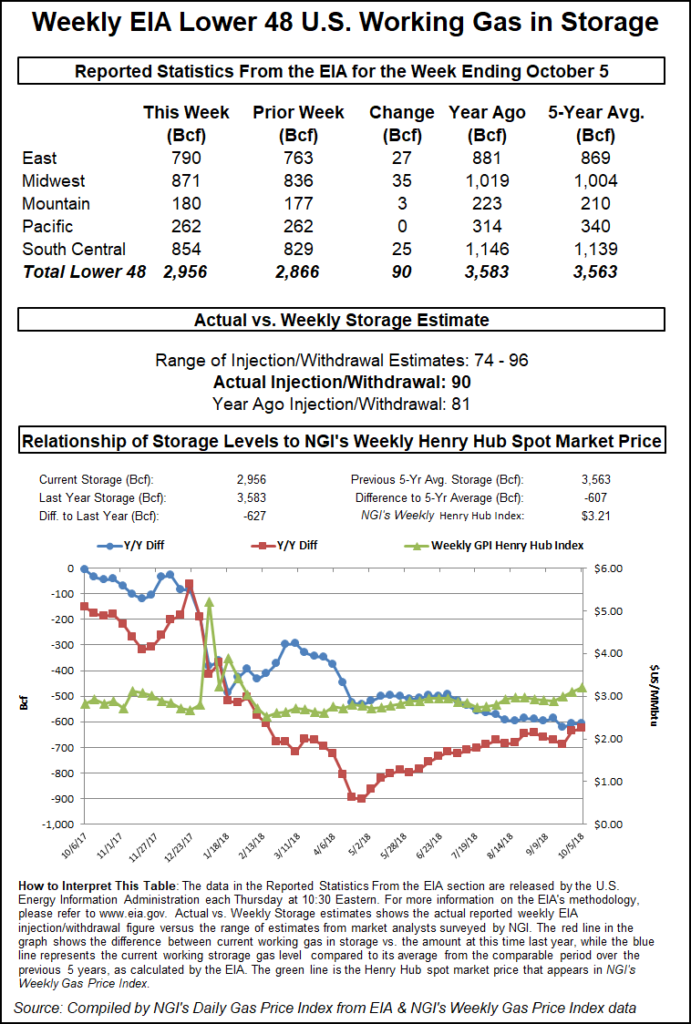 The reason behind the Rockies’ gains was two-fold. First, weather turned decidedly chillier this week as a cold snap hit the region early in the week, and another colder reinforcing shot was due to hit the region late in the weekend.

AccuWeather said snow will spread southward along a 1,000-mile-long swath of the Interstate-25 corridor, where a 24-hour temperature drop of 30 to 60 degrees is expected. Up to a foot of snow was expected on some of the eastern slopes of the Rockies, while a risk of power outages from fallen tree limbs was seen over portions of the High Plains and foothills.

Second, an explosion late Tuesday on Enbridge’s Westcoast Transmission system shut down the province’s main supply from northern production fields. Downstream utilities in the United States warned of possible disruptions following the explosion despite no damage to their systems.

Both FortisBC and Puget Sound Energy asked customers to conserve natural gas and electricity. Puget Sound indicated it would be switching its electric generation to alternative fuels rather than natural gas.

Genscape Inc. reported that partial capacity for southbound flow on Westcoast Transmission — amounting to more than 600 MMcf/d — had been restored on Friday following the explosion near Prince George, BC, and resulting force majeure. In addition, the Pacific Northwest’s ability to offset some of the supply disruption with alternative sources was improved when, on Thursday, the Northwest Pipeline (NWPL) was able to conclude pipeline and storage facility maintenance earlier than scheduled, Genscape said.

The week’s developments lifted Northwest Sumas prices up more than $1 to $3.645. Points along El Paso Gas Transmission in the Rockies also rose more than $1. Malin was up 45.5 cents to $3.055.

Appalachia regional prices also strengthened as substantial volumes began flowing on the long-awaited Atlantic Sunrise. The biggest new receipt point, Zick, came online on Central Penn Line North with a vengeance, posting 851 MMcf/d on both Oct. 6 and 7, according to Genscape. Eastbound volumes from Leidy through Station 515 dropped from roughly 2.40 Bcf/d to 1.90 Bcf/d as local production routed onto Central Penn Line South, which posted volumes of 1.65 Bcf/d for the weekend. This gas was delivered to the Transco mainline just north of Station 195, the firm said.

On the futures front, the not-so-storybook ending — one that saw the Nymex November gas contract plunge 10.6 cents on the week — failed to tell the whole tale as volatility was in full force during the Oct. 8-12 period. The Nymex prompt month started off Monday’s session up around 4 cents but by the end of trading had gained an impressive 12.4 cents to settle at $3.267.

The extreme swing fresh off a weekend came as weather forecasts “entirely headfaked” earlier guidance that showed a cold snap hitting the U.S. Midwest this week quickly fading. Instead, reinforcing cold shots were expected to keep temperatures in much of the country below seasonal averages, driving up demand and threatening already low storage inventories.

Despite wide 10-cent-plus swings during both Tuesday’s and Wednesday’s trading sessions, November futures shifted only a few cents both days. Thursday, however, brought about a more significant move as weather models hinted of milder weather around Oct. 20. Somewhat bearish storage data only reinforced the downtrend.

The Energy Information Administration on Thursday reported a 90 Bcf injection into storage inventories for the week ending Oct. 5. The reported build was in line with market expectations and lifted inventories to 2,956 Bcf, 627 Bcf below year-ago levels and 607 Bcf below the five-year average. Broken down by region, the Midwest injected 35 Bcf, the East injected 27 Bcf and the South injected 25 Bcf, including 10 Bcf into salt dome facilities and 15 Bcf into non-salt facilities.

Despite the 90 Bcf build, Mobius Risk Group said there is no guarantee there be will be further reductions before withdrawals begin in earnest. “As heating demand moves eastward, daily injection data will be closely followed by the market.”

Indeed, weather models flipped once again overnight Thursday and showed what is likely a return to sizably colder-than-average weather later in Week 2 as the negative Eastern Pacific Oscillation ridge rebuilds, according to Bespoke Weather Services. “This is what we had been looking for on overnight guidance after the trends yesterday afternoon, but still marks a sizable change from early week expectations as we had been watching for this pattern to break down,” Bespoke chief meteorologist Jacob Meisel said.

Part of the forcing responsible for this sustained cold appears tropical in origin and does look to cycle around once, but after that point, odds of breaking down increase markedly, Bespoke said. “… we still feel that into early November, we will struggle to maintain this cold and should finally see warmth return,” Meisel said.

Bullish weather aside, the market also contended with Hurricane Michael, which made landfall along the Florida Panhandle as a Category 4 storm midday Wednesday. As of Friday, around 1.5 million were without power, with the majority of outages in North Carolina and Virginia, according to the Edison Electric Institute.

Genscape’s total demand sample from the seven most affected states had fallen from a 30-day peak of 16.3 Bcf/d to 12.1 Bcf/d as of Friday’s intraday cycles. The biggest losses were along the eastern Gulf Coast and in North Carolina.

“Almost all of this 4.2 Bcf/d drop in demand is comprised of losses in power burns, as roughly a million residents and businesses are without power from Mississippi to Virginia. However, the immediate window after hurricanes can be bullish for gas in the short term as power demand has recovered quickly in the wake of the last few hurricanes, and startup times for gas plants are faster compared to coal and nukes,” Genscape natural gas analyst Josh Garcia said.

Meanwhile, Gulf of Mexico (GOM) production, some of which had been shut ahead of the storm, began recovering Thursday. Genscape’s daily pipeline production estimate showed GOM output climbing 69 MMcf/d to 1,553 MMcf/d on Thursday, with that number subject to revision.

The Bureau of Safety and Environmental Enforcement reported that 744 MMcf/d (29.1%) of offshore gas production and 680,107 b/d (40.0%) of oil production had been shut as of Thursday due to Michael.

Spot gas prices were mixed Friday, with most regions shifting only a few cents in either direction as gas flows into the United States continued to increase following the Westcoast explosion. Meanwhile, Appalachia prices eased slightly amid some unexpected maintenance in the region.

There were some exceptions to the relatively quiet pre-weekend session. Rockies pricing hubs continued to strengthen as a cold reinforcing shot of Canadian air was forecast to drop into that region and across the Plains late in the weekend before it traveled across to the southern and eastern United States early in the week.

Meanwhile, partial southbound flows resumed on Westcoast, and NWPL concluded pipeline and storage facility maintenance, Genscape said. NWPL’s receipts at the Sumas border point had to drop off precipitously due to the loss of flow capacity on Westcoast, though were starting to show some signs of the partial restoration of Westcoast. Evening nominations at Westcoast’s Sumas meter were up to 137 MMcf/d after hitting zero on Oct. 10, the data analytics firm said.

“NWPL has been able to partially accommodate for the lost gas by increasing storage withdrawals from its Jackson Prairie storage facility,” where planned maintenance was completed Thursday, one day ahead of schedule. NWPL was also able to finish work early at the upstream Roosevelt compressor, enabling more gas from the Rockies and/or AECO to make its way into the Pacific Northwest market, Genscape’s Bernardi said.

“With these changes, NGI price data showed Westcoast Station 2 basis recovered nearly the entirety” of Wednesday’s losses. However, with Westcoast flows only partially resuming, “Sumas continues to print a basis premium to attract supplemental supplies from other markets beyond BC,” he said.

Other Rockies points gained anywhere from 7 cents to as much as 24.5 cents, although Transwestern San Juan plunged 34 cents to $2.29.

California prices also strengthened, with SoCal Citygate picking up 16 cents to $3.665 and Malin rising 17 cents to $3.085. West Texas points gained ground, and El Paso-Permian crossed the $2 threshold after jumping 13 cents to $2.07; Waha was up just pennies to $1.96.

Most of the country’s midsection fell a few cents on average, while Southeast prices barely budged.

In Appalachia, Dominion South was down nearly a nickel to $2.62, and Transco-Leidy Line was down 9 cents to $2.645. Those losses come on the heels of a force majeure declared Oct. 10 by Columbia Gas Transmission (TCO) that shut in the Waynesburg interconnect and restricted flow through Clenwayn and Lone Oak A effective as of Thursday evening cycles.