Weekly cash prices surged amid lofty temperatures and solid cooling demand across much of the Lower 48. 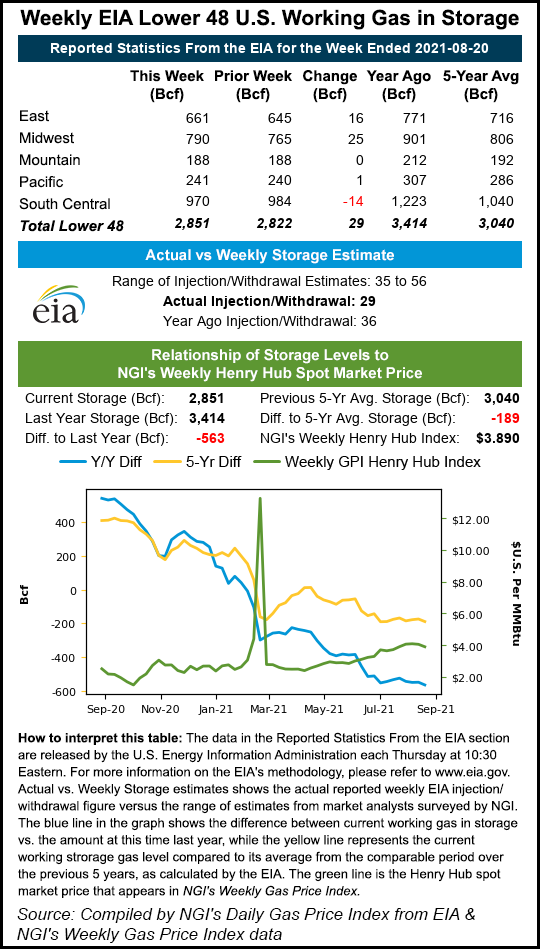 Conditions were ripe for robust air conditioner use across most of the Lower 48 during the week, with highs in the 90s over much of the nation’s midsection and across the East. Sweltering triple-digit highs in the Southwest and the deserts of California propelled prices even more.

Las Vegas, Phoenix and Palm Springs, CA, all posted daytime temperatures well into the 100s throughout the week.

Bespoke Weather Services preliminarily estimated on Friday that the week would set a record for this time of year in terms of gas-weighted degree days. That is substantial given that the last five summers have been among the hottest on record.

Meanwhile, fueled by strong summer demand, an anemic storage report and concerns about a looming hurricane impacting Gulf of Mexico (GOM) production, the September Nymex futures contract rallied late in the report period. It settled at $4.370/MMBtu to end the trading week on Friday, up 13% from the prior week’s finish. September rolled off the board at the week’s close.

Forecasters anticipate cooler weather in the week ahead. “Hot high pressure will weaken,” with “comfortable highs of 70s and 80s over most of the U.S.,” NatGasWeather said.

Hurricane Ida on Friday was expected to strengthen in the Caribbean Sea and become a major hurricane over the weekend. It was forecast to slam the northern U.S. Gulf Coast with strong winds, heavy rains and flooding that could further dampen natural gas demand, NatGasWeather noted.

Looking to the second week of September, the firm said the “northern and eastern U.S. will be mostly comfortable with highs of upper 60s to lower 80s for light demand as weak weather systems track through with showers.” However, it added, “the southern U.S. will be warm to very warm,” led by triple-digit highs in the Southwest.

Futures seesawed early in the week, as traders mulled strength in cash prices against the specter of waning demand on the horizon with fall weather.

But the prompt month soared on Thursday after the Energy Information Administration (EIA) reported a 29 Bcf storage injection for the week ended Aug. 20. The September contract settled at $4.184 on Thursday, up 28.7 cents day/day.

The EIA result came in far below already modest expectations and kindled fresh concerns about the potential for light inventories ahead of the peak winter demand season.

Prior to the inventory report, analysts expected a build in the upper 30s to low 40s Bcf, major surveys found. NGI estimated an increase of 37 Bcf. A year earlier, utilities injected 45 Bcf into underground stocks, and the five-year average build was 44 Bcf.

Wind generation was light during the covered week, placing added demand on natural gas to fuel robust cooling needs. The small increase last week extended a trend of relatively light builds over the course of a hot summer.

Futures went on to reach a two-and-a-half-year high on Friday as hurricane worries intensified and the likelihood of protracted production interruptions mounted.

As of midday Friday, nearly 49% of the natural gas produced in the GOM had been taken offline, operators told the Interior Department’s Bureau of Safety and Environmental Enforcement.

The National Hurricane Center (NHC) on Friday estimated Ida would make landfall along the northern Gulf Coast Sunday. “Steady to rapid strengthening is expected when Ida moves over the southeastern and central Gulf of Mexico over the weekend, and Ida is expected to be a major hurricane” before reaching the Gulf Coast, the NHC warned.

The September contract on Friday advanced another 18.6. cents day/day.

“If Ida stays on its current trajectory, it will plow through the middle of the production area in the Gulf,” limiting supply and justifying the upward pressure on futures, the EBW analysts said Friday.

Daytime temperatures were expected to remain firmly in the 90s to 100s through the weekend, but then plummet as a hot upper ridge lost steam. Weakening was expected to usher in far cooler highs in the 70s and 80s for most of the country, aided by Ida.

Wood Mackenzie said Friday several pipelines were posting notices related to the hurricane. Destin Pipeline Co. LLC said at some point on Friday, the Main Pass 260 platform would be evacuated and the Pascagoula Processing Plant in Mississippi was expected to be shut down. Transportation services would then be unavailable. Consequently, High Point Gas Transmission LLC alerted customers that it would not be able to transport gas through its interconnect meter with Destin.

On the pricing front, Henry Hub spot gas prices climbed 29.5 cents to average $4.340 for gas delivery through Monday. Texas cash also strengthened, with the largest increases in the western part of the state. Waha jumped 25.0 cents to $4.100.

Gains were much smaller in Appalachia, but Tenn Zone 4 200L shot up 15.5 cents to average $3.965. Most Northeast points lost ground as slightly cooler weather was on the way to the region. Transco Zone 6 NY cash was down 16.0 cents to $3.830 for gas delivery through Monday.