In an abbreviated four-day trading week ahead of the Christmas holiday, weekly cash prices gave up ground amid mild temperatures and light heating demand across much of the Lower 48. 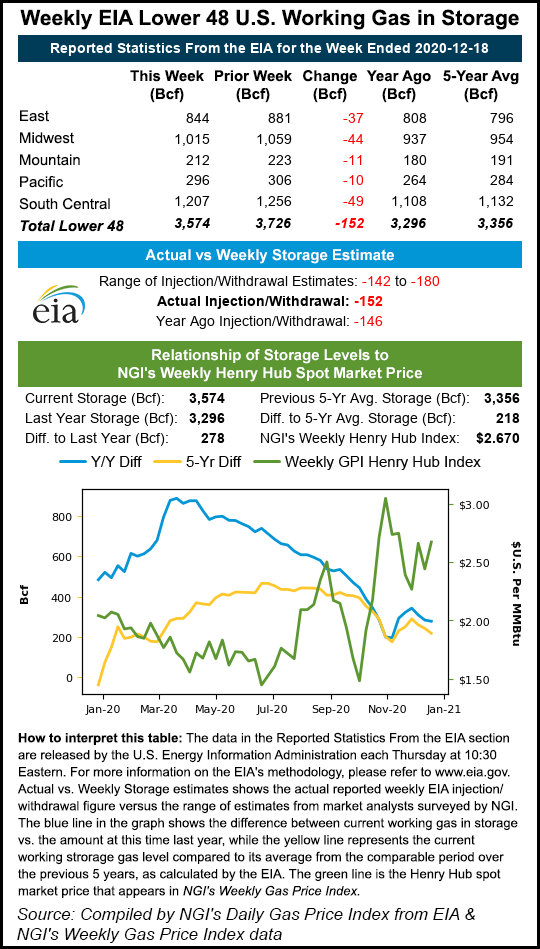 Comfortable conditions moved in early and hung around until mid-week across much of the central and eastern half of the United States, with highs of 30s to 50s across northern regions and 60s and 70s over southern areas.

While not expected to prove consistently bullish, forecasters anticipated stronger demand in the final days of December and into early January.

NatGasWeather looked for a spike in demand in some regions over the long holiday weekend, beginning with subzero Upper Midwest temperatures on Thursday following blasts of snow. Freezing conditions were anticipated across wider swaths of the nation’s midsection and into eastern regions over the course of the weekend, with “frosty lows” ranging from below zero to the 20s over large portions of the country.

However, the firm added, “mild breaks in between is what prevents the coming pattern from being considered more intimidating.” It “is a better pattern with bouts of stronger demand, just without sustained cold that would lead to solidly bullish weather sentiment.”

Despite the short week, Nymex futures made a splash, falling sharply across the curve as a milder turn in the most recent weather models and a disappointing storage report hammered prices.

Futures had moved higher earlier in the week, with the January contract picking up more than 7.0 cents on Tuesday as weather models pointed to chilly conditions at the end of the month that were seen spilling over into January. However, both the American and European models backed off the intensity of the cold in more recent runs.

The warmer trend set the stage for a midweek sell-off along the Nymex strip. Prices on Wednesday already were lower ahead of the Energy Information Administration’s (EIA) weekly storage inventory, which was released a day earlier than usual because of the Christmas Eve federal holiday.

With the reported withdrawal coming in several Bcf below what the market had been expecting, the January Nymex contract spiraled even lower. The EIA said that inventories fell 152 Bcf for the week ending Dec. 18, but analysts had pegged the draw closer to 160 Bcf.

“We were looking for a bullish print versus consensus heading into the holidays, but it turned out to be coal in the stocking,” said Tudor, Pickering, Holt & Co. (TPH) analysts. They had projected a draw of 174 Bcf.

The TPH team said there are still “plenty of bullish undertones” as the EIA draw easily surpassed the five-year average of 112 Bcf and continues to reflect structural undersupply in the market to the tune of about 3 Bcf/d. Additionally, liquefied natural gas (LNG) flows continue to rise, with key LNG consuming regions in Asia and Europe scheduled for cold weather.

Looking ahead, TPH’s early modeling points to a draw in the range of 100 Bcf for the next EIA report, “but with upside to potentially seeing some 200-plus Bcf draws as we move into 2021.”

Nevertheless, weather is expected to remain in the driver’s seat when it comes to price action over the coming weeks. Bespoke Weather Services said it suspects there is more model volatility to come, and that the pattern will likely continue exhibiting some variability. However, the pattern cannot go “truly” cold with the Pacific setup in place.

“Still, we believe a variable pattern can be bullish with prices now as low as they are, but we stress caution and lower confidence given that we are heading into a long weekend with multiple days for weather models to change.”

The January Nymex contract settled at $2.518/MMBtu to close the trading week Thursday, down nearly 7% from the prior week’s finish.

Spot gas prices on Thursday, which were for gas delivered through Monday, were mostly lower. However, a chilly, wet forecast in the Northeast sparked big gains there. NGI’s Spot Gas National Avg. ultimately climbed 9.0 cents to $2.780.

Although most of the Lower 48 was a sea of Christmas red, Northeast markets rebounded sharply on Thursday as the region was being pounded by a wet winter weather system that was set to linger through the holiday.

The National Weather Service (NWS) said a robust surface low pressure system was forecast to strengthen over the Mid-Atlantic on Thursday and dash northward into southeast Canada by Christmas morning. Along and ahead of an associated cold front, “not-so-jolly” weather will be found up and down the East Coast.

“Plentiful moisture from the Gulf of Mexico is forecast to stream in and cause widespread heavy rain and thunderstorms,” NWS said. “A combination of factors will lead to flooding and flash flooding with this rain.”

On the backside of the strong cold front, a white Christmas will be in store for much of the Great Lakes region and as far south as the southern Appalachians, according to the forecaster. Heavy snow of several inches was to continue late Thursday in the Upper Peninsula of Michigan and western Lower Michigan. Lake-enhanced snow potentially accumulating over a foot is also likely near Lake Erie, NWS said, with snowfall amounts of 4 to 8 inches expanding south into eastern portions of the Ohio Valley and into the central/southern Appalachians.

“The cold temperatures behind the front could support rapid freezing of any standing water,” the forecaster said. “Not even Florida could escape this strong arctic cold front,” as bitter temperatures were expected to hit the Sunshine State by Christmas.

Prices farther upstream in Appalachia also strengthened, but by far lesser amounts. Texas Eastern M-3, Delivery was up 37.5 cents to $2.580, while Dominion South was up only 8.0 cents to $2.140.

The rest of the country posted mostly losses for the four-day holiday weekend. Henry Hub slipped 8.0 cents to $2.595, and Houston Ship Channel dropped 15.0 cents to $2.520.

Farther west, Kingsgate plunged 35.5 cents to $2.205, but the rest of the Rockies posted decreases of around 20.0 cents or less. Prices were mixed in California.

Leticia Gonzales contributed to this article