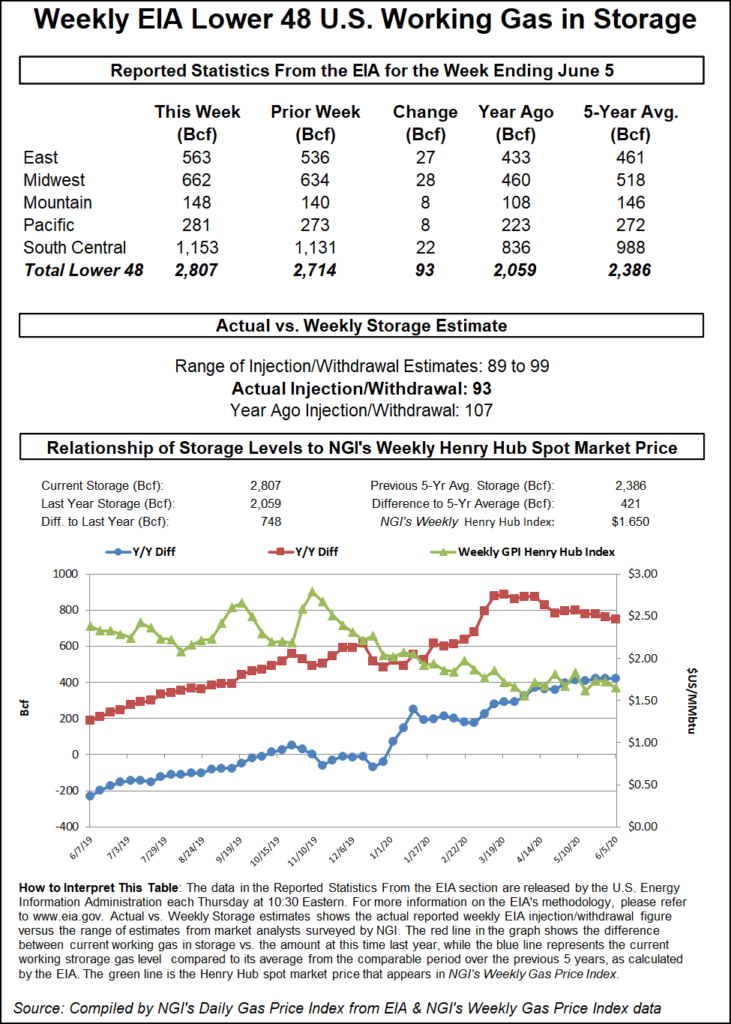 While lofty temperatures permeated much of Texas and the Southwest and forecasts called for intensifying heat later in June, storms and cooler weather that started in the middle of the country mid-week were moving to the East for the weekend and into following week, NatGasWeather said, dampening demand and keeping spot prices in check.

Solid power burns helped lift cash prices Monday through Wednesday, but the unfavorable weather conditions tracking from the Midwest to the East drove losses over large swaths of the Lower 48 on Thursday, sending spot prices lower that day. Cash prices fell again Friday to finish the week in the red.

Markets in the Midcontinent and Midwest posted smaller losses, while modest gains were seen across Appalachia and the Southeast.

News was plentiful throughout the week, though natural gas futures mostly traded in a narrow range of gains and losses as markets tried to assess whether supply/demand tightening was developing rapidly enough to absorb bloated inventories ahead of the fall.

As it has for months, the long shadow of coronavirus outbreaks hung over markets throughout the week. Gas flowing to LNG export plants remained substantially below pre-pandemic levels, as weakened demand from Europe and most of Asia persisted. Economies on both continents are only gradually emerging as governments ease restrictions that had been ordered to slow the spread of the virus.

The Federal Reserve said Wednesday that it expects U.S. unemployment, which exceeded 13% in May, likely will come down in the second half of the year but only to a range of 9%-10% by the fourth quarter, tracking a slow, protracted economic comeback. That, coupled with new worries about a second wave of virus outbreaks before a vaccine is available, has broadly worried investors across stock and commodities markets, said Raymond James & Associates Chief Investment Officer Larry Adam.

“Great expectations of a strong economic and earnings rebound are being met with a dose of reality,” Adam said.

At the same time, associated gas production is starting to pick up as more U.S. oil producers increase output following the recovery in crude prices from the depths reached in April. While oil prices remain volatile and continued production ramp-ups are hardly certain, the potential for rising associated gas supply at a time when demand is dependent in part on a shaky economic comeback raised doubts about the direction of gas prices.

“We see natural gas pricing skewed to the downside in the near term, as LNG feed gas losses and production increases are expected to weigh on the commodity,” Tudor, Pickering, Holt & Co. analysts said.

EIA reported an injection of 93 Bcf into natural gas storage for the week ending June 5, below the 107 Bcf increase posted in the same week a year earlier. Ahead of the report, a Wall Street Journal survey landed on an average of 93 Bcf, while a Bloomberg poll found a median of 94 Bcf. NGI estimated a 96 Bcf build.

The print suggested supply/demand tightening, but surpluses remained elevated at 422 Bcf, NatGasWeather said. The firm added that “several more weeks” could pass before there is “significant improvement.”

The build for last week increased inventories to 2,807 Bcf, above the year-earlier level of 2,059 Bcf and the five-year average of 2,386 Bcf.

Cash markets lost ground across the Lower 48 Friday as a cool front and rain showers pushed to the East Coast.

Heat continued to permeate Texas and much of the southern and western United States, with highs ranging from the upper 80s into the 100s. Forecasters anticipate more lofty temperatures elsewhere later in June.

In addition to the current system, a “reinforcing cool shot” was expected into the East over the weekend then it was seen stalling into the coming week “with highs of 60s to 80s,” NatGasWeather said Friday afternoon, explaining why conditions were not hot enough overall to drive up prices.

On the pipeline front, meanwhile, Nautilus Pipeline LLC on Thursday declared a force majeure because liquid volumes exceeded capacity of the slug catcher upstream at its Neptune plant, according to Genscape Inc. As a result, the firm said, Nautilus was unable to make deliveries to the Neptune plant and reduced all receipt capacity at its Manta Ray locations and its Acadian Onshore receipt point. The restrictions cut nearly 140 MMcf/d of receipts on Nautilus.