Weekly natural gas cash prices gained ground amid seasonally strong demand in the West and another anticipated round of frigid temperatures in the region during the week ahead. 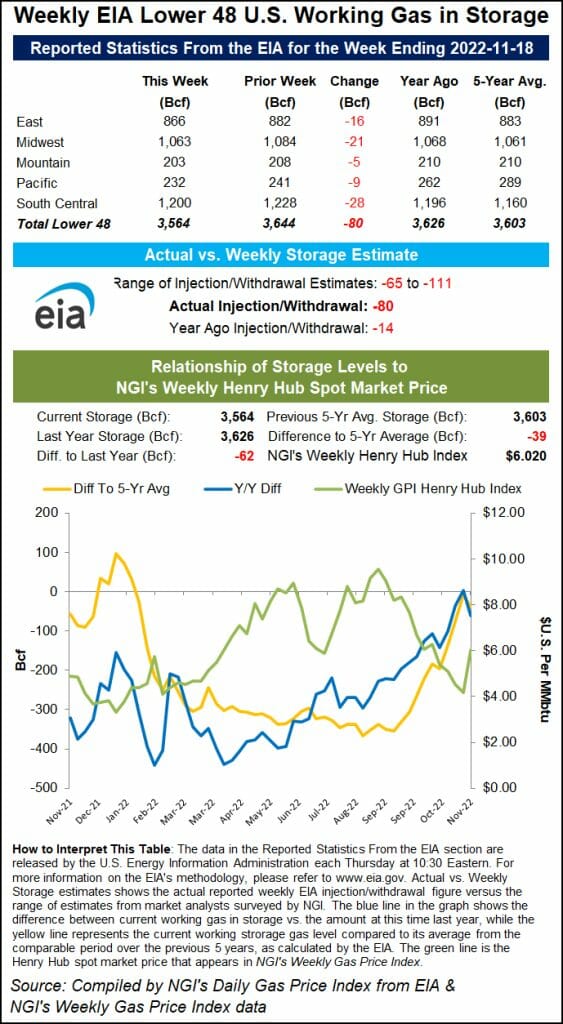 The December Nymex futures contract, meanwhile, also climbed through the three-day trading period ahead of the Thanksgiving holiday. It settled at $7.308 MMBtu on Wednesday, up 52.9 cents on the day and up 16% from the prior week’s finish.

Aside from heavy rains in parts of the South and swaths of cold in the West, forecasters anticipated relatively mild conditions over the long holiday weekend and to start the next trading week. However, NatGasWeather looked for “bouts of stronger demand across the Midwest and Northeast to start December” and “frigid air is expected into the West and northern Plains Nov. 29-Dec. 7.”

Traders said a multitude of factors influenced futures over the course of the week, but ultimately, favorable weather and forecasts for more in December powered prices forward.

“Weather is going to get colder as we get into December,” Marex North America LLC’s Steve Blair, senior account executive, told NGI. At that point, the January contract will take over as the prompt month, utilities will be firmly into storage withdrawal season, and futures could have “more room to run.”

Futures rallied without interruption on a series of catalysts, culminating with the first storage withdrawal of the season on Wednesday.

The U.S. Energy Information Administration (EIA) reported a withdrawal of 80 Bcf natural gas into storage for the week ended Nov. 18.

The result easily exceeded a decline of 14 Bcf in the year-earlier period and a five-year average decrease of 48 Bcf.

The storage withdrawal followed news that the Freeport LNG export plant in Texas, forced offline in June following a fire, expects to begin bringing operations back online in mid-December. That is a month later than an earlier target, but the company said it could bolster liquefied natural gas capacity by up to 2.0 Bcf/d in a matter of weeks. The Freeport announcement came as Europe is clamoring for U.S. exports.

Additionally, Russia’s Gazprom PJSC, which once supplied about 40% of Europe’s gas imports and has already throttled that back to less than 10% since the Kremlin invaded Ukraine in February, threatened further cuts in the past week. This could add to demand for U.S. LNG.

News of a potential railroad strike that surfaced early in the past week also supported futures. Barring a labor agreement between management and unions by Dec. 8, a railway worker walkout could follow. This would disrupt coal deliveries and drive demand for gas as a substitute, analysts at the Schork Report noted.

Spot gas prices on Wednesday advanced across the West, as they did throughout the week, bolstering the national average.

Prices were particularly strong in the Northwest and Rocky Mountain regions to close out cash trading ahead of the Thanksgiving holiday.

National Weather Service (NWS) forecasts pointed to a break in strong national heating demand from Thanksgiving until the end of the month, with highs in the South ranging from the 50s to the 70s and peak temperatures in northern markets generally in the 40s and 50s.

That noted, as December arrives, fresh bouts of cold were expected to form in the West and Plains. This could usher in frigid overnight lows – potentially sub-zero in some areas – and such conditions were expected to extend through the first week of December, according to NWS data.

Most areas of the South and East could see seasonally normal temperatures – and benign conditions – early next month. Still, the cold air in the West is forecast to push east and south by around Dec. 3-5, delivering frosty lows and likely galvanizing strong national heating demand.