A lingering blast of frigid air that was mixed with rain and snow sent weekly prices higher between Feb. 19 and 22. While most of that wintry mix had dissipated by midweek in much of the country, weather out West remained unsettled and resulted in sharply higher prices in southern California. Still, the NGI Weekly National Avg. rose just a nickel to $3.275. 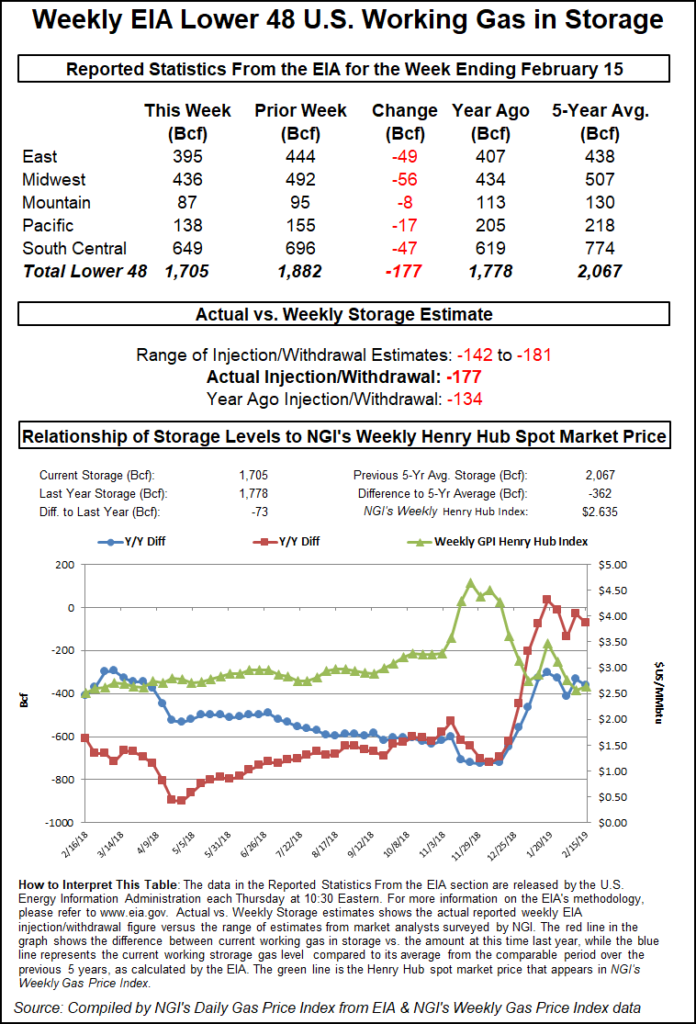 SoCal Citygate weekly prices, meanwhile, shot up more than $6 to $15.035 as the chilly, wet weather made for continued strong demand across the state. The market also had to contend with pipeline import restrictions and ongoing storage limitations at Aliso Canyon.

Other market hubs in the state softened, with PG&E Citygate tumbling 70 cents to $6.915.

Prices across the Rockies were mixed as Cheyenne Hub jumped more than 20 cents for the week to $2.735, while Kingsgate dropped more than $1 to $6.315.

Northwest Sumas prices were essentially slashed in half to $9.815 even as fresh gas flow restrictions were announced on British Columbia’s Westcoast Transmission. Planned maintenance on Westcoast was set to begin over the weekend and last through early next week, potentially limiting flows by as much as 375 MMcf/d, according to Genscape Inc.

A cleaning tool run scheduled for Saturday would require Station 4B South operational capacity to drop to 1,272 MMcf/d, which would represent a cut of about 375 MMcf/d versus the month-to-date average. Capacity was projected to rebound to 1,552 MMcf/d on Sunday, but then drop again on Monday to 1,407 MMcf/d — a cut of about 250 MMcf/d.

Over in the Northeast, weekly prices were mixed as New England points came off recent cold-induced highs, while other markets firmed a bit. Transco Zone 6 non-NY was up nearly a dime to $2.735.

Similar gains were seen in the Midwest, with Chicago Citygate edging up to $2.695.

On the futures front, the week was marked mostly by days in the black as weather models pointed to the return of cold weather later this month, with the possibility that frigid air could stick around through the first third of March.

Despite the general move higher throughout the week, some fluctuations in Friday’s weather data led into choppy trading to end the week. The Nymex March gas futures contract ultimately climbed 5.5 cents from Tuesday-Friday to $2.717. April rose 4.2 cents to $2.739.

Weather data overnight Thursday trended somewhat warmer, dropping about five to six heating degree days (HDD) from the outlook for the next 10 days, according to NatGasWeather. However, both the European and Global Forecast System models showed colder trends for March 6-9, according to the forecaster.

“The data continues to advertise a mild to warm pattern across the South and East late this week through the middle of next week, besides Monday where a quick cold shot will race across the northern United States,” NatGasWeather said. “This will be followed by cold spreading to cover most of the country Feb. 28-March 7 for much stronger-than-normal national demand…”

The market’s focus will likely turn to the second week of March, where overnight data favored cold conditions lingering, according to the forecaster. “The cold camp has the burden of proving it, and if they can, weather patterns would be considered quite bullish after the weekend break.”

The coming pattern fits well with what Bespoke Weather Services sees from the upstream tropical forcing during the next couple of weeks. This forcing begins to shift after the first week of March, “which should allow gas-weighted degree days to moderate as we move toward March 10, potentially warming further thereafter,” Bespoke chief meteorologist Jacob Meisel said.

Midday Global Forecast System data added back the modest demand losses from overnight, while maintaining the cold to end the month.

Despite the lack of clarity on the intensity of the upcoming late-season blasts, gas storage deficits are expected to widen during the next few weeks. This week, the Energy Information Administration (EIA) reported a 177 Bcf withdrawal that pushed inventories down to 1,705 Bcf, 73 Bcf below last year and 362 Bcf below the five-year average.

Regardless, the chance of meaningful storage scarcity is rapidly declining, according to Barclays. With roughly six weeks left in the winter season, storage holders have less incentive to hold onto gas and purchase gas on the spot market instead, it said.

The firm’s model shows a more balanced market next month with withdrawals of a mere 2 Bcf/d or so, which would be the fifth smallest on record. With this in mind, Barclays has reduced its 1Q19 forecast to $2.78 from $2.98. Its full-year 2019 forecast is down a nickel to $2.76, which is bearish versus the current Nymex strip by about a dime.

As for storage, the firm expects inventories to end February between 1.4 and 1.5 Tcf, below where it expected end-March in its last update. The recent price slide amid supportive storage, however, suggests that this is not enough to arouse significant bullish interest in the March or April 2019 contracts.

“Volatility has died down, too. Thus, even though we have lowered our end-March stocks to sub-1.4 Tcf, gas balances are unlikely to tighten enough to cause another substantial rally, even if March is very cold. In our view, the market has moved on,” Barclays analysts Samuel Phillips and Michael Cohen said.

Furthermore, the forward path of production this summer will have an outsized impact on price strength next winter, according to analysts. While Barclays’ production growth estimates trail those of the EIA by some 3.0-3.5 Bcf/d, a 3 Bcf/d shift in summer production would add about 600 Bcf to its call for end-October stocks, pushing inventories toward historical highs north of 4 Tcf.

“This storage level would markedly lower the chance for storage scarcity and, thus, high prices next winter,” the firm said.

Meanwhile, uncertainties surrounding oil production and its impact on associated gas (which Barclays expects will contribute more than half of year/year growth), will also reflect production’s importance in determining the shape of the forward curve “this summer and beyond.”

Nymex futures were stuck in the $2.70-3.00 range for most of last summer, wrongly assuming production growth was sufficient to overcome low stock levels, according to BofA Merrill Lynch. The spike to nearly $5 in November caught many consumers off guard, leading to a flurry of hedge activity in the hope of averting a future crisis.

“In our opinion, this reactionary hedging activity has artificially supported prices this winter. In fact, winter 2019-20 prices are higher today than during mid-November,” said a team of BofA Merrill Lynch analysts led by commodity strategist Clifton White.

But even with substantial growth in liquefied natural gas exports and a slowdown in domestic production growth (the firm expects 5.8 Bcf/d growth in 2019 versus 8.8 Bcf/d realized growth in 2018), “we believe the cumulative market looseness will lead to above-normal inventories by end of the summer,” White said.

More importantly, the firm estimates salt inventories will be near full, which reduces the winter forward price premium and drives its winter 2019-20 forecast of $2.80, which is 20 cents below the current strip.

Spot gas prices were mixed Friday as heavy showers were occurring along a boundary between the cooler central United States air and milder conditions over the Southeast and Mid-Atlantic, according to NatGasWeather. High pressure was forecast to further strengthen across the South and East through the weekend, bringing unseasonably mild conditions over the Ohio Valley and Northeast and even warmer weather across the Southeast and Mid-Atlantic Coast.

A quick cold shot was forecast across the Great Lakes and Northeast Monday for stronger demand, although temperatures were expected to quickly warm back up Tuesday to Wednesday, the forecaster said.

Appalachia prices were more uniformly down, although losses were capped at a nickel at the majority of pricing hubs.

In the Southeast, spot gas prices slipped as much as 8 cents, while Louisiana prices budged a few pennies in either direction.

Midcontinent spot gas rose more than a nickel at most locations, but most Midwest gains were limited to less than that.

Spot gas prices in West Texas continued to tumble amid steep sell-offs on the West Coast and in the Rockies. Waha plunged 38 cents to $1.24.

Given the cuts to flows off Westcoast, Northwest Sumas in the Rockies shot up around $11 in Friday trading to average $16.65, even as most other regional pricing hubs fell more than $1.

Substantial losses were also seen across California, and SoCal Citygate unsurprisingly took the top prize for the steepest day/day drop in the region. SoCal Citygate spot gas plunged almost $6.50 to average $6.46. Malin was down $1.35 to $4.03.

Meanwhile, in Western Canada, the unrelenting chilly air has led to a widening storage deficit in the region. The recent storage draw came in at 18 Bcf, 6 Bcf larger than the five-year average, “putting the storage deficit at a healthy 7% versus five-year norms,” according to TPH.

The gap is expected to widen further next week, thanks to Jack Frost’s death grip on Western Canada as the firm is calling for a 16 Bcf draw, twice the normal amount.

“On the back of the cold weather, AECO prices have stayed resilient with February spot prices averaging above C$2.60/Mcf. However, pricing strength isn’t expected to stick around with the 2Q2019 forward strip falling to C$1.25/Mcf and 2019 sitting at C$1.45,” TPH analysts said.