Weekly natural gas cash prices struggled to gain traction amid mild temperatures and light demand across much of the Lower 48. 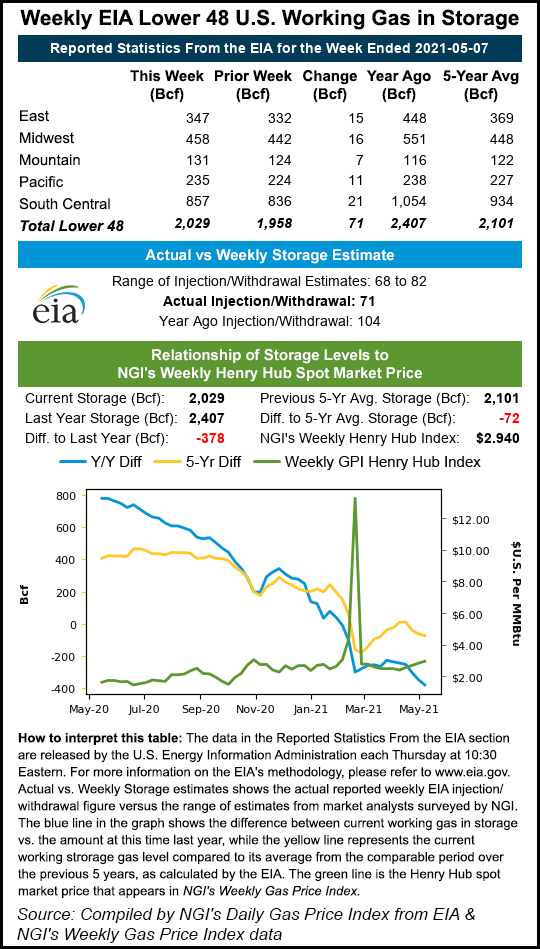 Waning heating demand also helped to keep the June Nymex futures contract in check. The prompt month settled at $2.961/MMBtu to close the trading week Friday, up just 0.1% from the prior week’s finish.

Cool conditions moved in early across much of the central and eastern half of the United States, with lows in the 30s to 50s, supporting prices to start the week. But temperatures climbed as the week wore on. Forecasts called for comfortable temperatures in the week ahead as well.

As the trading week closed, price declines were steepest in the volatile Northeast. Algonquin Citygate dropped 36.0 cents to $2.290 and Niagara lost 27.0 cents to $2.330.

“Our view is that the next two to three weeks will reveal more significant loosening and is why we remain slightly bearish,” Bespoke Weather Services said. Looking to the week ahead, “the risk is for a weakening trend in cash and a move lower in the prompt month.”

Hubs in California and the Southwest could see the start of consistent cooling demand over the next few trading sessions, with high temperatures in the triple digits possible. Elsewhere, however, comfortable highs are more likely, Bespoke noted.

“We do see better warming in the medium range modeling…and that will gradually become more important over the next couple of weeks if it can hold,” the firm added Friday. “But we are still wary of the recent warm bias in the modeling, so prefer to see how things trend over the weekend.”

Natural gas futures were mostly range bound throughout the week, stumbling on Monday before making modest gains each of the next three days. The prompt month closed out the week on Friday with a 1.2-cent decline after markets digested an in-line storage report and a lull in exports.

The U.S. Energy Information Administration (EIA) on Thursday reported an injection of 71 Bcf natural gas into storage for the week ended May 7.

The result was roughly on par with expectations set by major polls. It compared favorably to the five-year average build of 82 Bcf and the year earlier injection 104 Bcf. The print provided a small boost for futures on Thursday.

The latest build lifted inventories to 2,029 Bcf. That compares with the year-earlier level of 2,407 Bcf and the five-year average of 2,101 Bcf.

Early estimates for the next EIA inventory report were as low as 50 Bcf – modest for this time of year.

That outlook, coupled with expectations for strong liquefied natural gas (LNG) export demand through the summer, helped to offset forecasts for weaker domestic weather-driven demand in the second half of May.

But futures finished the week on a sour note Friday. LNG volumes dipped down to around 10 Bcf – near a recent low – due to limits largely caused by temporary maintenance work at export facilities.

Aside from the past week, however, 11 Bcf or higher has proven common for exports this spring. Analysts say LNG will likely rebound after maintenance work culminates and continue to prove strong through the summer cooling season. Demand is steady because European gas storage was depleted over a freezing winter, fueling need for U.S. LNG and boosting prices.

Elevated needs in Europe are also driving up prices in Asia, another important destination for American exports.

Apart from recent days, U.S. LNG export terminals “are running at their operationally available and contracted levels and will continue to do so, with no economically driven cargo cancellations anywhere on the horizon,” RBN Energy LLC analyst Lindsay Schneider said. “Global gas prices are well supported by low storage levels in Europe, and it will take time to refill inventories, which means these high prices are not going away anytime soon.”

There were small pockets of gains but overall light weather demand kept progress at bay on Friday. Prices dropped throughout the Midwest as the last remnants of a late spring cool shot pushed out of the region.

Prices also sunk in the Northeast. Daytime temperatures had dipped into the 50s early in the week, fueling some heating demand. By Friday, however, highs hovered in the 70s.

Out West, where prices proved volatile this week despite forecasts for robust cooling demand, Kern Delivery gave back 28.0 cents to $2.755 and SoCal Citygate plunged 55.5 cents to $2.890.

NaGasWeather said to expect much more of the same in coming days as the “northern U.S. will warm into the very nice upper 60s to lower 80s…as high pressure builds.” States across the South “will also be mostly comfortable with highs of 70s and 80s, with only locally 90s over portions of southern Texas and Florida.”

The West, however, will be “warm to very warm” with highs ranging from the 70s all the way into the 100s in the Southwest deserts, the firm said in its Friday outlook to May 20.