Most physical natural gas points nationally made it into positive territory for the week ended Sept. 12, but a few losing points, most of those in the Northeast, spoiled the party and the NGI Weekly Spot Gas Average came in unchanged at $3.70. 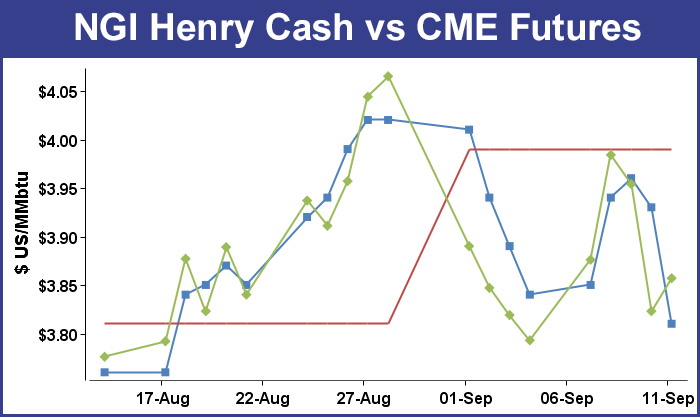 Of the actively traded points the week’s Top Gun was the SoCal Citygates with a gain of 11 cents to average $4.42 and the week’s biggest loser turned out to be the Algonquin Citygates dropping $1.14 to average $2.82. All regions with the exception of the Northeast and South Louisiana were unchanged or in the black. Individual California points saw the largest gains, with most locations coming in from a nickel to 11 cents higher, and the Northeast, which saw moderating temperatures during the week, saw prices decline by a nickel to more than a dollar.

For the rest of the country, trading was muted, with individual points either picking up, or dropping a few pennies on the week.

Over in the natural gas futures arena, trading was much more spirited, as an early-week price run-up on a forecasted cold push was nearly washed out by Thursday’s bearish 92 Bcf storage injection for the week ending Sept. 5. October futures added 6.4 cents for the week to $3.857. The 92 Bcf build was a surprise, but in all fairness analysts had the daunting task of attempting to balance the Labor Day weekend with an eastern heat wave.

October futures fell to a low of $3.822 soon after the number was released Thursday and by 10:45 EDT October was trading at $3.832, down 12.2 cents from Wednesday’s settlement. “The earlier morning losses seemed to signal the market’s version of a pre-emptive strike at what was anticipated to be another oversized injection,” said Teri Viswanath, director of commodity market strategy at BNP Paribas. “With last week’s storage release coming in higher than market consensus, it appeared that traders were placing early wagers on the off-chance that lighting might strike twice. While this bet seemed ill-advised at the time, given the string of undersized injections in August, it certainly paid off [Thursday] – with the Oct’14 futures contract retreating $0.116 [post report] from [Wednesday’s] settle at $3.838/MMBtu.”

She noted that “Historically, the highest seasonal stock builds occur at the point where cumulative heating degree days begin to out-pace cooling degree days. The updated commercial weather forecasts suggest that this transition period might occur as early as the week of Sept. 26th. Accordingly, with inventory restocking beginning to reaccelerate in response to declining weather demand, we expect the front of the futures curve to retest the season-to-date lows.

Prior to the report analysts were looking for an upper-80s Bcf build. Nonetheless, the contraction in the deficit is nothing to sneeze at. Last year, 64 Bcf was injected, and the five-year pace stands at 60 Bcf.

Jim Ritterbusch of Ritterbusch and Associates was looking for an increase of 87 Bcf, and Citi Futures Perspective came in with a low 70 Bcf estimate. A Reuters survey of 27 traders and analysts revealed an injection of 82 Bcf with a range of 65-89 Bcf.

Analysts had a tough time balancing eastern heat with the holiday weekend. Bentek Energy’s flow model calculated an 87 Bcf injection with the increase from last week’s 79 Bcf due almost entirely to the Labor Day holiday and commensurate reduced power burn.

The shoulder season has now begun in earnest, and storage injections that some have estimated might reach 100 Bcf or more may be ready to pounce. It was not to be — not this week at least. This time around, analysts were looking for an upper-80s Bcf build. Nonetheless, the contraction in the deficit is nothing to sneeze at. Last year, 64 Bcf was injected, and the five-year pace stands at 60 Bcf.

Phillip Golden, director of risk and product management at EMEX, noted that the report was certainly bearish when compared to market expectations of 82-84 Bcf and historical norms. “This very bearish storage report has resulted in a significant fall in the market, reversing a large portion of the price increases from earlier in the week,” he said, adding that EMEX still believes that the best buying opportunities are likely to occur between now and the end of October. “Today’s market fall represents one of those opportunities.”

Not only did the build outpace projections, it also set records for this time of the year. “This week’s injection is the largest for the twenty-third week of the injection season,” Golden said. “The second largest injection we have seen was 69 [Bcf] back in 2009.”

“If we were to revert back to historical averages, we would end this injection season at just under 3,400 Bcf, which would be a very nice recovery from this past winter,” he said.

Inventories now stand at 2,801 Bcf and are 443 Bcf less than last year and 463 Bcf below the 5-year average. In the East Region 60 Bcf were injected and the West Region saw inventories up by 12 Bcf. Inventories in the Producing Region rose by 20 Bcf.

Thursday’s 13-cent futures price flush may not be as significant as it seems. Analysts Christopher Louney and Michael Cohen at Barclay’s said, “Although the usual culprits — cool weather and a bearish storage injection — pressured the prompt contract, prices were still higher week on week as of Thursday’s close. Prices have remained subdued this summer versus the highs of last winter as overall weather has been cool and storage injections strong. Yesterday, a higher-than-consensus storage injection was the biggest pressure on prices, but cool weather risks in the east added to the downside pressure.

“The latest injection narrowed the deficit versus the year-ago level by 28 Bcf, to 443 Bcf, and the deficit to the five-year average by 32 Bcf, to 463 Bcf. In line with this, we reiterate our view that storage will end the injection season at about 3.5 Tcf, roughly 300 Bcf below last year’s level, which would require a weekly build equivalent to the 10-week moving average.”

A lower than normal ending inventory won’t likely be enough to avert still lower prices as analysts see further price deterioration ahead as weather forecasts prove unsupportive and the back half of the hurricane season should see some storm premium dissipate. “The deficit against five-year averages has shrunk to roughly 14%, or 463 Bcf. With similarly sized large supply builds likely ahead during the next couple of months, [Thursday’s] report reinforced our expectations for a peak supply north of the 3.6 Tcf level,” said Ritterbusch on Thursday. [Thursday’s] sharp selloff also provided some indication that this week’s price spike on Monday-Tuesday was overcooked and destined for evaporation.

“November futures that dropped down to within about 5 cents of last Friday’s close appear destined for fresh lows to below the $3.76 level likely by Monday. Meanwhile, we see nothing particularly bullish about the short term one- to two-week temperature outlooks, and we also see a need for some storm premium evaporation now that the statistical peak of the hurricane season has passed,” he said. “In sum, we are maintaining a bearish trading posture in quest of fresh lows and a drop to about the $3.65 region where we may begin to consider the long side of the winter contracts.”

In its September Short Term Energy Outlook, the Energy Information Administration estimated storage at “3,477 Bcf at the end of October, 339 Bcf lower than at the same time last year.”

With Friday weather forecasts looking mild over the weekend, buyers stepped back and found little incentive to spring for a three-day deal when incremental volumes can be purchased easily with today’s plethora of personal communications devices.

All but a couple of market points fell into the loss column, and losses of a dime or more were common. Eastern points suffered losses of up to a half dollar as forecasters called for the lowest temperatures since the spring to envelop the Northeast Sunday into Monday. The overall market dropped 18 cents. October futures managed a modest gain, adding 3.4 cents to $3.857, and November gained 3.7 cents to $3.910.

Weekend and Monday gas fell as next week “high temperatures are forecast to be in the 70s in most major cities during most days next week, with nighttime lows in the 50s, [but] following a chilly rain during part of the weekend, the coolest air since the spring will settle over the Northeast Sunday night into Monday morning,” said AccuWeather.com meteorologist Alex Sosnowski. “Temperatures are forecast to dip into the 50s from Boston and New York City to Philadelphia and Washington, DC. The last time readings were this low was during the first couple of days of June in most cases and in late May in others.

In Appalachia, weekend and Monday gas on Columbia Gas TCO dropped 9 cents to $3.81, and parcels on Dominion South shed 34 cents to $2.05.

Marcellus points were also weak. Deliveries on Transco Leidy were seen 39 cents lower to $1.97, and gas on Tennessee Zone 4 Marcellus fell 35 cents to $1.94.

The recent softness in Great Lakes pricing has marketers stocking up. “We did buy a fair amount for the weekend, and we were able get gas at $3.88 on Consumers,” said a Michigan marketer. He said the price had gotten better and was less than what his September baseload was priced at.

The marketer said that winter basis had risen to 39 cents, but “we locked in gas for a portion of our customers at 31 1/2 cents. The basis was the big problem last winter, and we were paying $6 to $8. Getting the 31 1/2 cents was a decidedly better deal and that will take us all the way through March.”

Traders weren’t paying much attention to a broad area of low pressure tracking over southern Florida Friday that may have the potential to strengthen and move toward natural gas infrastructure along the Gulf Coast early next week, according to one forecaster.

“While the tropical circulation that is tracking over Florida looks [like] nothing more than some disorganized thunderstorms, we do expect it will become more impressive later in the day,” meteorologists at Natgasweather.com said Friday.

Meteorologists were also following Tropical Storm Edouard about 1,245 miles east of the northern Leeward Islands. At 5 p.m EDT Friday Edouard was packing 45 mph winds and was headed to the northwest at 13 mph. The National Hurricane Center projected that Edouard will pass to the east of Bermuda, but should it change course and head more west, it could impact East Coast energy demand and lessen power requirements with heavy rainfall, lower temperatures and cloud cover.

Industry consultant Genscape said the 92 Bcf build Thursday “saps the strength out of the winter contract [and] also marks the 16th week this summer that injections have set a five-year high. The build brings working gas in storage to 2,801 Bcf. This closes the deficit to last year’s same-date inventory to 452 Bcf, and brings current inventories to within 464 Bcf of the five-year average.