If believers needed any more assurance of a well supplied market, they had only to look at Texas and the week’s blistering heat to gain an appreciation of just how ample current supplies are. Texas recorded back to back record power burns Thursday and physical and futures prices moved nary an inch. 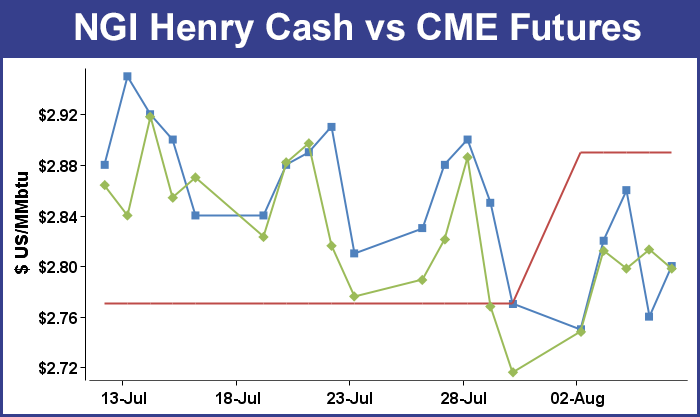 If the Northeast is excluded, the Texas weekly gas price experience mirrors that of the nation as a whole, down about a nickel. However, with the Northeast included, the NGI Weekly Spot Gas Average for the week ending Aug. 7 fell 12 cents to $2.58. The Northeast region alone recorded a loss of 51 cents to average $1.76. Awash in a national sea of red, East Texas and the Midcontinent reported the week’s best performance easing just 3 cents to $2.77 and $2.73 respectively.

The individual point showing the greatest gain — and one of the only points showing any gain at all — was Northwest Sumas, which has experienced warmer than normal temperatures and low hydro supplies (see Forward Look, July 31). The point rose 17 cents to $2.62, and the week’s greatest losers turned out to be Algonquin Citygate, down $1.78 to average $1.64, followed closely by Tennessee Zone 6 200 L with a decline of $1.47 to $1.69.

September futures gained 8.2 cents on the week to $2.798, and a small portion of that resulted from Thursday’s gains following the release of storage data by the Energy Information Administration (EIA). Futures traders saw no reason to get excited about storage injection data coming in well below everyone’s estimates and at the close Thursday, September had added a miserly 1.5 cents to $2.813 and October had gained 1.4 cents to $2.835.

The market response to the EIA storage report showing a 32 Bcf injection for the week ending July 31 was underwhelming. It wasn’t quite as weak as the nearly 10 cent drop in the September futures a week prior when a reported 52 Bcf build hit trading screens, about 2 Bcf below expectations, but it was out of character nonetheless.

Futures traders were on the lookout for one of the thinnest storage builds of the season. Last year, a stout 83 Bcf was injected, and the five-year pace is 53 Bcf. IAF Advisors of Houston calculated an increase of 39 Bcf, and Genscape was looking for a 40 Bcf build. A Reuters survey of 27 traders and analysts revealed an average 42 Bcf with a range of 38 to 47 Bcf.

The hot, humid weather of the prior week prompted power loads not seen in three years and was expected to generate the thinnest storage build in more than a month. “Power demand matched the all-time weekly high during the week, averaging nearly 35.7 Bcf/d and set a new single-day record of 38.4 Bcf/d, which is more than 0.6 Bcf/d above the previous record which was set in 2011,” Bentek Energy said in a report.

“It was a half-hearted rally that failed against $2.83 which is the next resistance level,” said a New York floor trader. “If the market gets below unchanged, I think it will test $2.78.”

Tim Evans of Citi Futures Perspective noted that “The 32 Bcf net injection for the week ended July 31 was clearly below the 42-Bcf expectation and bullish relative to the 53-Bcf five-year average as well. There were no reclassifications of gas or other adjustments mentioned in the report.”

Inventories now stand at 2,912 Bcf and are 535 Bcf greater than last year and 64 Bcf more than the 5-year average. In the East Region 36 Bcf were injected and the West Region saw inventories increase by 2 Bcf. Stocks in the Producing Region fell by 6 Bcf.

In Friday’s trading, physical natural gas for weekend and Monday delivery managed a small gain as forecasters continued to call for a ridge of high pressure to lock in debilitating heat and humidity over Texas and portions of the Southeast. Also, a major pipeline into the Midwest cut deliveries.

The NGI National Spot Gas Average added 2 cents to $2.54, although scattered points in the East, West Texas and California did experience declines. Futures trading ahead of the weekend proved lackluster, with September held to a narrow 6-cent range. At the close September had fallen 1.5 cents to $2.798, and October was down 1.3 cents to $2.822. September crude oil continued its march lower, falling 79 cents to $43.87/bbl.

Prices at Midwest points firmed as a major pipeline into the area called for a force majeure. According to Genscape, “Alliance Canada and U.S. pipelines posted notice late [Thursday] that the pipe will be shut down for an unspecified period of time due to the presence of excess hydrogen sulfide on the mainline. The event constitutes a force majeure”(see related story).

Alliance is a big supplier to the region. “During the past 30-days, Alliance Canada has been flowing an average 1,792 MMcf/d across the border to Alliance U.S., with single-day flows reaching as high as 1,977 MMcf/d on the roughly 2,000 MMcf/d capacity system. The notice was issued following the close of yesterday’s trading.

“Alliance flows wet gas out of BC, Alberta and Saskatchewan, primarily for delivery to the Aux Sable processing plant in Illinois, after which dry gas gets distributed to Midwest pipelines and demand markets. The shutdown will likely cause many upstream producers to shut in or direct displaced gas to the TransCanada NOVA system where that is an option.”

Weekend and Monday deliveries posted solid gains. Gas at the Chicago Citygate rose a nickel to $2.89, and deliveries to Michigan Consolidated gained 8 cents to $2.97. Gas on Consumers was seen at $2.98, up 8 cents, and deliveries to Northern Natural Ventura were quoted 7 cents higher at $2.84.

A Michigan marketer said the outage “didn’t impact us because we are a little long on gas and just shuffling it around. You never know you might be glad you have more than you wanted.”

Gas on Marcellus pipes were flat to slightly down going into the weekend. Packages on Transco-Leidy Line slipped a couple of pennies to $1.18, gas on Tennessee Zn 4 Marcellus was unchanged at $1.10, and deliveries into Dominion South changed hands 3 cents lower at $1.22.

Analysts for the near term see a rangebound market with an expected cooling pattern developing that should prompt higher storage builds going forward. “We expect a quiet finish to this week’s trade as the market still appears balanced with the supply surplus against five-year average levels now back to less than 65 Bcf,” said Jim Ritterbusch of Ritterbusch and Associates in a Friday morning report to clients.

“While bullish-inclined traders can cite [Thursday’s] supply build that came in more than 10 Bcf less than average Street ideas as a significant supportive factor, bearish participants can hang their hats on the negligible price response to a seemingly bullish number. At the end of the day, this market still looks like a standoff between the bulls and the bears that will likely be precluding a price swing of much more than 20 cents in either direction from yesterday’s settlement even when extending a view out through the rest of this month.

“We will continue to advise that traders adapt to changing market conditions by considering option straddle positions designed to collect premium in a market that could potentially show little change from current levels a month from now or even two months down the road. The record power demand that contributed to yesterday’s sharply downsized injection appears unsustainable with some cool temperatures now being projected in some cases through the third full week of August. And although a season-ending storage of 4 Tcf may appear out of reach, a record supply level still represents strong probability.”

Gas buyers over the weekend for Texas power generation had their hands full juggling not only oppressive heat and humidity but also fluctuating wind input. WSI Corp. in its Friday morning report said that for ERCOT, “Hot weather will remain the rule for most of the period under a sub-tropical heat dome over the south-central U.S. Daytime high temperatures are expected to rise into the upper 90s, and low to mid 100s. ‘Feels like’ temperatures are going to be extremely elevated here, rising into the 105-115 F range! Models are indicating some risk for less extreme heat next week as a cold front slowly noses down the central and eastern U.S.

“A diurnally driven favorable wind generation pattern will be the rule through the period, with afternoon lulls dropping to around 3-4 GW and overnight peaks near 8-10 GW. The 10 GW peaks are favored this weekend. However, flow is expected to reduce early next week and reduce generation prospects late in the period.”

Hefty wind generation can’t come a moment too soon as Texans continue to consume record amounts of electric power. On Wednesday ERCOT reported a record peak load of 68,459 MW, but that was beaten Thursday on two separate occasions. Between 3 and 4 p.m. CDT demand set a new record at 68,538 MW, but just an hour later demand reached another record between 4 and 5 p.m. CDT at 68,912 MW.