Having to deal with not only demand destruction and production setbacks in the wake of Hurricane Harvey, but now also impending demand loss in the face of approaching Hurricane Irma, the natural gas market for the week ended Sept. 8 still proved rather resilient. 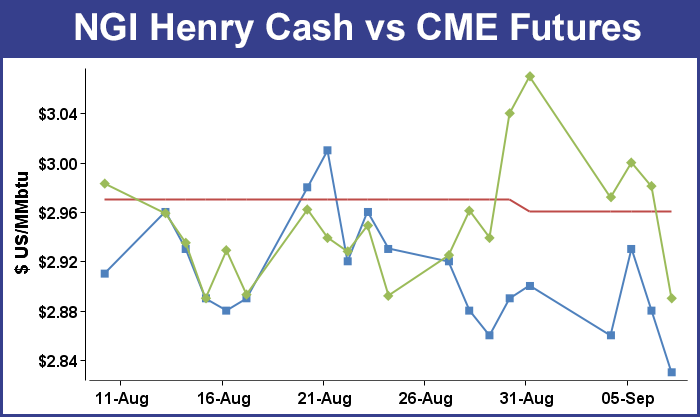 The NGI Weekly Spot Gas Index fell a miserly 5 cents to $2.55, and the week’s largest decline was seen north of the border at NOVA/AECO C with a drop of $C0.98 to $C0.63/Gj. Iroquois Waddington proved to be the week’s greatest gainer with an increase of 54 cents to $1.93.

Regionally the market was bracketed by the Northeast showing a rise of 11 cents to $1.88, and California dropping 31 cents to $2.97.

Most points outside of West Texas, California and the Northeast showed gains or losses either side of unchanged and of the remainder of the country losses ranged from the Southeast, down 8 cents to $2.84 to the Midcontinent losing only a penny to $2.67.

In Thursday’s trading the Energy Information Administration (EIA) reported a storage build of 65 Bcf, in line with expectations, and futures were held to a lean 6 cent range. At the close October had eased 1.9 cents to $2.981, and November had fallen 1.6 cents to $3.053.

Prior to the report traders were looking for a storage build about equal to the actual figures. Last year, however, 38 Bcf was injected and the five-year average build stood at 58 Bcf for the week. Kyle Cooper of ION Energy calculated a 64 Bcf injection and Stephen Smith Energy Associates estimated a 67 Bcf build. A Reuters survey of 22 traders and analysts showed an average 64 Bcf increase with a wide range of plus 30 Bcf to plus 83 Bcf.

“The market is within a 6-cent range so how badly can you get hurt with that,” a New York floor trader told NGI. “We’ve been trading right around the $3 level for how long now? It’s just kind of stuck in this range.”

“Under $2.90 on the downside, then maybe you would see $2.75. We have just been drifting back and forth now for a long period of time.”

As for the market impact of looming Hurricane Irma “that is already in the market. We know where it is going.”

Inventories now stand at 3,220 Bcf and are 212 Bcf less than last year and 15 Bcf greater than the five-year average. In the East Region 32 Bcf was injected, and the Midwest Region saw inventories rise by 32 Bcf as well. Stocks in the Mountain Region were unchanged and the Pacific Region was down 5 Bcf. The South Central Region added 6 Bcf.

In Friday’s exchanges traders were unwilling to commit to three-day deals for physical natural gas as they not only saw a well-supplied market, but looked at the potential loss of demand stemming from Hurricane Irma. Several points traded near one-year lows, and the hardest hit regions were the Rockies, Northeast, Appalachia, and the Southeast. The NGI National Spot Gas Average skidded 15 cents to $2.40.

Futures traders were equally impressed with the potential load-killing effects of Irma and at the close October had dropped 9.1 cents to $2.890 and November had fallen 8.8 cents to $2.965. October crude oil imploded $1.61 to $47.48/bbl.

Several eastern points traded at near one-year lows. Gas on Dominion South fell 40 cents to 80 cents and deliveries to Tetco M-3 fell 39 cents to 84 cents, the lowest prices since late September 2016. Elsewhere gas at the Algonquin Citygate fell 36 cents to $1.10 and packages bound for New York City on Transco Zone 6 were quoted 48 cents lower at $1.28.

Deliveries to the Chicago Citygate dropped 9 cents to $2.74 and gas at the Henry Hub came in a nickel lower at $2.83. Gas on El Paso Permian changed hands 15 cents lower at $2.50 and gas priced at Northern Natural Demarcation was seen a dime lower at $2.67.

Longer term traders are going long natural gas. “I am a scale-in buyer of natural gas,” said Alan Harry, trader and principal of Harry’s RE Trust in New York. “I think this is the last time prices go down, and I have bought a lot of spreads and outright positions between $2.80 and $2.85. I am buying October – January spreads which are trading at 34 cents and I think it could narrow to 18 cents.

“What I am thinking is right now traders are selling natural gas and selling the spreads since [Irma] looks like it is going to affect demand more than supply, but this is going to be very temporary. What will happen after that is we will hear more news about less supply coming into the market. We are getting into possibly a colder winter, and we are going to be shipping more liquefied natural gas.

Traders are thinking the cooler temperatures from Hurricane Irma will keep pressure on prices near term, “while the more extended views beyond next week are beginning to favor normal trends across much of the mid-continent region. These shifting forecasts don’t appear sufficient to spark much of a price advance,” said Jim Ritterbusch of Ritterbusch and Associates in a note to clients.

“By and large, the hurricane impact on gas demand appears to be outweighing the effects of curtailed production in prompting an end to the contraction in the supply surplus that has provided background support to the gas futures through most of this year. But we will also note that yesterday’s 65 Bcf injection stretched the modest storage excess against five year averages by only 7 Bcf with negligible change expected in next week’s data. So with a miniscule 15 Bcf supply surplus apt to extend into the second half of this month, downside price possibilities would appear limited.

“But, on the other hand, lack of significant warming trends across other than a few small pockets of the country during the next couple of weeks will be restricting price gains especially with the arrival of the shoulder period. As a result, we feel that this market could easily remain trapped within the approximate 20 cent confines of the past month through the rest of September even allowing for a plethora of hurricane headlines.”

Weather forecasters are having difficulty ascertaining the exact impact of Irma on near term weather and temperatures. “Confidence remains on the lower end of moderate due to uncertainties with the pattern evolution tied to the remnants of Hurricane Irma,” said MDA Weather Services in its morning six- to 10-day outlook. “By Day 6 the storm is expected to have degenerated into a weak remnant low over the Mid-South that eventually gets absorbed by an upper trough and pulled out. This keeps belows in the South early in the period with moderation then taking place mid-period. Aboves and much aboves are prevalent early from the Interior West to the Plains with aboves advancing into Texas and the Midwest in the latter part of the period. Models are generally warmer overall.

“The pattern uncertainties tied to the fading remnants of Irma keep confidence more limited than usual, and models are warmer across the Plains and western Midwest, especially the GFS.”