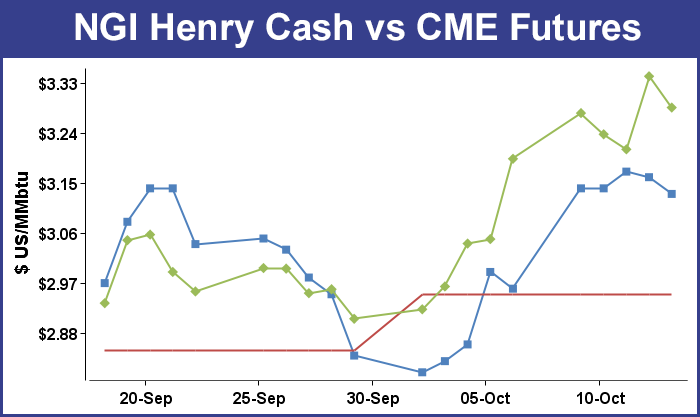 All but one U.S. point gained, and most locations were solidly in double digits.

The market point showing the week’s greatest gain was Transco Zone 6 non-New York South, reflecting deals made on Transco in Maryland and Virginia, which was up 43 cents to $2.65. The week’s greatest loser proved to be Canadian Westcoast Station 2 with a decline of $C0.23 to $C2.07/Gj.

All regions were in positive territory, and East Texas stood atop the leader board with a 25-cent advance to $3.12, and Appalachia lagged the pack with a 5-cent rise to $1.13.

Thursday saw the Energy Information Administration (EIA) report an inventory build of 79 Bcf, about 8 Bcf less than industry estimates, and prices wasted no time in marching higher. At the close November had added a stout 13.1 cents to $3.341, the highest close in 22 months, and December was up by 12.2 cents to $3.532.

As soon as the EIA report rattled across trading desks November futures reached a high of $3.320 and by 10:45 a.m. November was trading at $3.308, up 9.8 cents from Wednesday’s settlement.

“We were looking for an 87 Bcf number, so the market got a little boost. Right off the bat we made $3.32 and it’s staying there,” a New York floor trader told NGI.

Others saw reporting issues in play. “The data for last week was a clear bullish surprise, a 79 Bcf build instead of the 87-88 Bcf consensus forecast,” said Tim Evans of Citi Futures Perspective. “Coming after a larger-than-expected 80 Bcf refill in the prior week suggests there may have been some issues at the margin between the two periods rather than an overall shift in supply versus demand.”

Inventories now stand at 3,759 Bcf and are 56 Bcf greater than last year and 192 Bcf more than the five-year average. In the East Region 14 Bcf were injected and the Midwest Region saw inventories increase by 26 Bcf. Stocks in the Mountain Region rose 3 Bcf, and the Pacific Region was higher by 5 Bcf. The South Central Region added 31 Bcf.

The NGI National Spot Gas Average tumbled 14 cents to $2.56, and New England and Mid-Atlantic points were the biggest losers. Only a few points traded unchanged or in positive territory, but futures retreated as some traders elected to cash in their chips before the weekend. At the close, November had given up 5.6 cents to $3.285, and December was lower by 2.9 cents to $3.503.

Traders say natural gas may have made a short-term peak. “From a technical perspective just under $3.38 was one of our major resistance levels, and I’m not surprised to see the market back off a little bit being up as it has been,” said Steve Blair, vice president at Rafferty Technical Research in New York.

“I think a lot of people are starting to look at the fact that we are starting to talk about above-normal temperatures in the near-term forecasts. That starts to work against the market in that even though we are above normal, we are certainly not into power generation for air conditioning.

“Above-normal temperatures can work against the market since you don’t have the cold either, there’s no heating demand.”

Analysts see a market driven more by technical factors than fundamentals. “[T]his market remains much stronger than we had anticipated as technically inclined traders still have numerous reasons to work the long side. Our expected resistance at the $3.30 level was easily shrugged off, and it now appears that a gap on the weekly charts of last December will be filled via an additional price upswing to the 3.40 area,” said Jim Ritterbusch of Ritterbusch and Associates in closing comments Thursday.

“Although it is still easy to build a bearish case as a record peak supply is still possible early next month, the market strength is apparently reflecting a continued dynamic of surplus contraction. [Thursday’s] narrowing of around 13 Bcf in the overhang against five-year averages could easily be followed by a similar contraction in next week’s data. A slower than expected production pace appears to be contributing to a significant portion of the sub-normal supply increases. The process of reversing this month’s upside acceleration may require an extension of mild temperature trends into early November.

“Although we had alluded to the possibility of shorting this market on rallies, we will defer for now given the magnitude of the ongoing advance that is developing with very little assistance from the weather drivers.”

The time to short may come sooner than later as higher prices encourage new supplies in the form of drilling rig activity. Stronger natural gas prices have apparently enticed drillers as 11 gas rigs came back into U.S. play, accompanied by an additional four oil rigs, making for an overall gain of 15 for the week ending Friday (Oct. 14), according to Baker Hughes Inc. (see related story).

That could turn out be a good thing as at least one analyst figures that the natural gas market will have to take care of itself in the months ahead given a decline in associated gas production.

“…[T]here is lots of production on tap, for instance in Eagle Ford and Haynesville, but how quickly and easily that growth [can] be delivered since most non-Northeast gas regions have been in decline quite a while now is very uncertain,” wrote Societe Generale’s Breanne Dougherty in an Oct. 7 note. “The lack of additional support from associated gas is ultimately forcing the gas market to take care of itself as it returns to growth.”

Traders needing to buy gas for power generation in ERCOT for the upcoming weekend will have plenty of weather and plenty of wind generation to work with. “A Heat Alert has been issued. The tail end of a weakening cold front and a trailing upper-level low will keep the chance of rain and embedded thunderstorms in the forecast across northern portions of the state [Friday],” said WSI Corp. in its Friday morning forecast.

“This will impede temperatures across the northern tier, but the southern half of the state will remain warm and moderately humid, with max temps in the 80s to mid 90s. A developing south-southwest flow will promote partly sunny, unseasonably hot and moderately humid conditions during the weekend into early next week

“A diurnally influenced south-southwest wind will support periods of strong wind generation, especially during the evening and overnight hours. During these daily peaks, total output is forecast to range 10-12 GW. Variable cloud cover will impede total solar generation today, but increasing sunshine will support solar prospects during the weekend into early next week.”

Weekend and Monday packages in the Mid-Atlantic weren’t hit quite so hard. Gas on Tetco M-3 Delivery lost 21 cents to 79 cents, and gas bound for New York City on Transco Zone 6 retreated 26 cents to 80 cents.