U.S. physical natural gas prices for the four-day trading week ending Thursday produced mixed results, with small gains in Texas, flat California trading and small losses nearly everywhere else dwarfed by fall-off-a-cliff declines for much of the Northeast. NGI‘s National Spot Gas Average for the week finished at $2.11, down 17 cents. 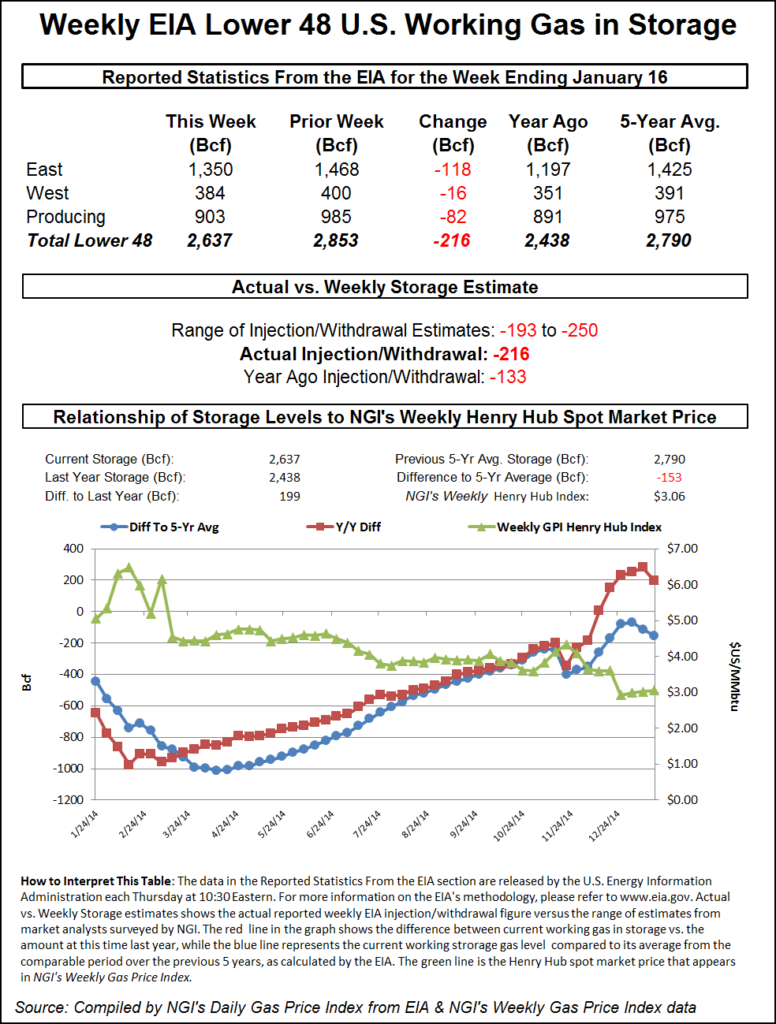 The cliff in question was Winter Storm Jonas, which is now firmly in the rearview mirror along with the icy temperatures that were associated. In its place are moderating temperatures and forecasts of more to come, which allowed the Northeast region to plummet 70 cents for the week to average $2.05, thanks to individual point weekly declines like $1.55 to average $3.50 at the Algonquin Citygate, and a $1.25 haircut to $2.48 for Transco Zone 6 NY.

California came in flat on the week at $2.28, and the only two regions to make it into the black were South Texas and East Texas with gains of 2 cents and a penny, respectively, to average $2.12 apiece.

Over in the natural gas futures arena, Friday’s gain marked the eighth consecutive regular session increase for front-month futures, which runs back to the last week and a half of the February contract’s reign. However, traders warned that it might not be the bull call it appears to be at first glance. The March natural gas futures contract sparked higher on Friday, adding 11.6 cents to $2.298, which represents a 15.7-cent increase over the contract’s previous Friday finish.

The week’s gains came even though the market was unimpressed with Thursday morning’s storage report, which revealed that 211 Bcf was removed from underground storage for the week ending Jan. 22. While the season’s first 200-plus Bcf draw was significantly larger than historical comparisons for the week, many analysts and traders had a pretty good bead on what the Energy Information Administration (EIA) report would show.

“I have not heard anything specific behind Friday’s run-up,” David Thompson, vice president at Powerhouse LLC, a Washington DC-based trading and risk management firm, told NGI. “The larger than expected storage draw was 24 hours prior and we had no great shakes around the middle of the day on Friday when they update the weather models. Instead, it was a slow and steady advance all of the way from 8 a.m. in the morning. It never got too far ahead of itself, and on the chart it was a nice 45-degree angle on the way up.”

Thompson said the rally began around Christmas, but all of it has been on noticeably declining open interest. “A rally on declining open interest tends to mean that’s shorts buying back some of their positions. I wouldn’t put a whole lot of stock into this as fresh buying coming in. Volume has also been diminishing over the last few weeks for the most part, so there has been no new fresh buying coming in on this rally.”

In Genscape’s Natural Gas Basis commentary on Friday, Margolin noted that this trend continued in the winter of 2014/2015, with nominations to power plants growing by 15% compared to the previous year, but “not enough to unseat citygates as the proverbial King of the Mountain. Summer of 2015 saw more of the same as power demand grew by another 20% while citygate nominations grew at a mere 3%.”

Looking to the current season, power is currently on pace to grow by 11% according to Genscape data while citygates seem to be shouldering the brunt of the demand slowdown, currently down an average of 22% compared to last year.

“In total, SEMA is seeing a slight downturn in demand, with overall consumption down 4.9% from an average of 15.8 Bcf/d of consumption last winter to 15.1 Bcf/d this winter,” according to Margolin. “Looking forward to next week, a warming trend over the weekend should put temperatures above average for this time of year. However, as the week progresses, another cold front could potentially drive temperatures into the 25 HDD range, creating bullish demand in the 19-20 Bcf/d range like last week.”

“Back-to-back strong absolute draws bring storage overhang down into the historic range,” TPH said. “However, like last week, the market on a weather-adjusted basis showed only 3 Bcf/d undersupplied, which is well shy of the impressive 5 Bcf/d undersupply situation in late December. Spot price moved down to $2.2/MMcf/d from $2.4/MMcf/d the previous week, but it didn’t seem to impact gas-generation market share, at least for last week. We continue to look for a 5 Bcf/d undersupply through withdrawal season to clean-up the El Nino-induced storage overhang before the end of season. Of course colder than normal weather also works.”

In the minutes prior to the 10:30 a.m. EST storage report on Thursday, the March contract was trading at $2.111. Immediately after the report, the prompt-month contract hovered around $2.135 before inching higher in the afternoon to close.

The muted market response to such a large draw likely had to do with the fact that a significant draw was already priced into the market, and to the recent revisions to the weather forecast. Ahead of the report, Citi Futures Perspective Analyst Tim Evans said he was concerned that the reaction to the large storage withdrawal might be the market’s last chance to rally since the relatively warm temperatures forecast for next week will translate into a much smaller storage decline. He added that natural gas futures were “on the defensive Thursday morning after the temperature outlook turned slightly warmer than a day ago, undercutting heating demand for the fuel.”

Following the fresh storage data’s release, Evans called the report “supportive” and doubled down on his earlier comments.

“While the draw was moderately above the consensus forecast for 207 Bcf, it was still within the range of expectations and may not fully offset the forecast for milder temperatures going forward,” he said. “To some extent, this minor bullish surprise may be the market’s best opportunity to move higher for at least the next few weeks. Failure to rally would underscore the downside vulnerability, with traders concluding that winter is effectively over, banking on the seasonal warming trend to limit storage withdrawals over the balance of the season.”