Natural gas futures may be serving its function as a leading indicator for the cash market as a wide divergence took place in cash and futures trading for the week ending Oct. 7. The NGI Weekly Spot Gas Average fell 7 cents to $2.51, but the November contract added nearly 30 cents as the market digested a favorable Natural Gas Supply Association winter report and failed to yield to an overly large inventory report on Thursday. Hurricane Matthew sliced up the Florida coast with an estimated 0.5 Bcf/d loss in gas demand for the state. 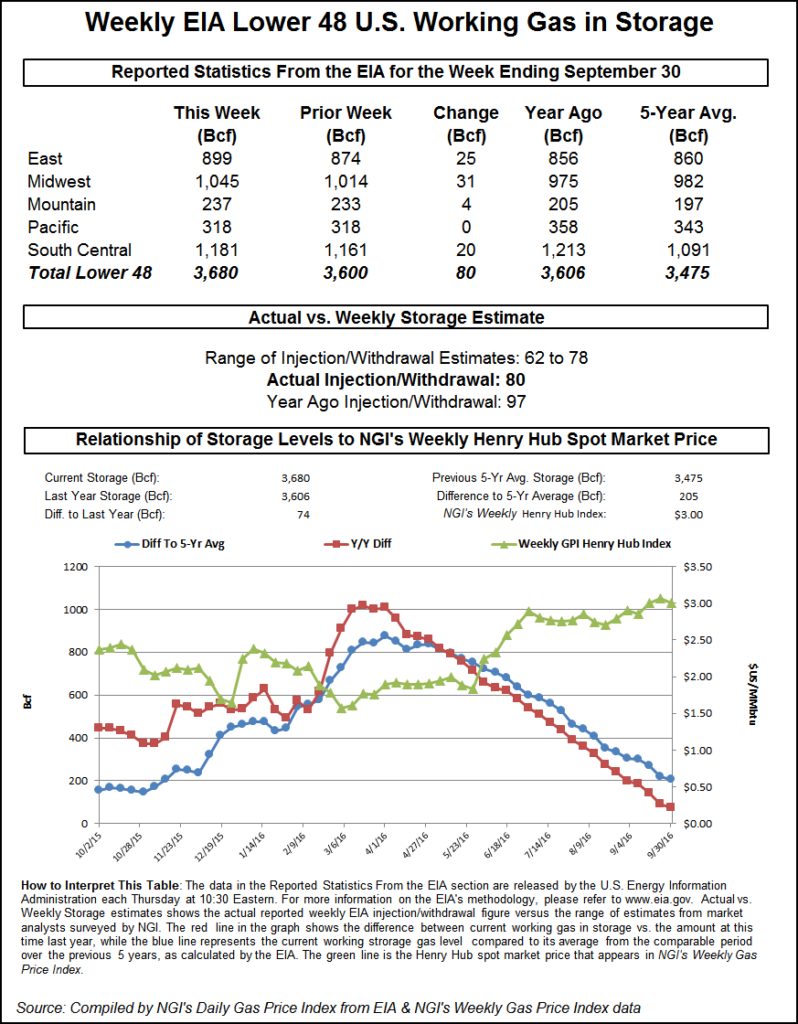 The individual market point showing the greatest gain was Transco Zone 5 North with a 70-cent advance to average $2.59 and Westcoast Station No. 2 brought up the rear with a $C0.30 decline to $C2.30/Gj.

Regionally roles were somewhat reversed with eastern points coming off hefty double digit losses the prior week to post gains amidst most market points slipping about a dime. California and the Midwest proved to be the biggest losers posting losses of 12 cents to $2.89 and $2.79, respectively, but the Rockies weren’t that much ahead with a drop of 11 cents to $2.61.

The Northeast flipped into the gain column with a rise of a penny to $1.63, the Southeast added 7 cents to $2.83 and Appalachia posted the week’s greatest gain with an 11 cent improvement to $1.08.

The November futures outdid everyone during the week with a 28.7 cent advance to $3.193.

Thursday’s activity saw an Energy Information Administration (EIA) report of a storage injection of 80 Bcf for the week ending Sept. 30, about 10 Bcf above expectations and although futures sank initially, they staged a healthy rally going into the end of the session. November managed a gain of eight-tenths of a cent to $3.049 and December was higher by 2.2 cents to $3.282.

The EIA reported build of 80 Bcf caught traders by surprise and November futures reached a low of $2.972 immediately after the figures were released and by 10:45 a.m. November was trading at $2.994 down 4.7 cents from Wednesday’s settlement.

“It’s trying to get itself back over $3,” said a New York floor trader shortly after the number was released. “If it can get back over $3.01, you will see confidence come back. To me the market still looks good. It did its dance when the number came out and now its holding.”

“The larger-than-expected 80-Bcf build suggests that producers may be ramping up supply ahead of the winter or that power sector demand has faded more quickly than anticipated as temperatures cool seasonally,” said Tim Evans of Citi Futures Perspective. “Either way, it suggests more robust storage injections for the weeks ahead.”

Inventories now stand at 3,680 Bcf and are 74 Bcf greater than last year and 205 Bcf more than the five-year average. In the East Region 25 Bcf were injected and the Midwest Region saw inventories increase by 31 Bcf. Stocks in the Mountain Region rose 4 Bcf, and the Pacific Region was unchanged. The South Central Region added 20 Bcf.

In Friday’s trading three-day deals became a tough sell as Hurricane Matthew moved up the Florida coast, and gas for weekend and Monday delivery fell by double-digits, although most points declined by a dime or less.

The NGI National Spot Gas Average fell by 11 cents to $2.50 on Friday, but large losses in New England skewed the average. Major market centers averaged losses of a nickel or less. Futures raced forward, buoyed by its ability to hold $3 in the face of unsupportive shoulder season fundamentals, and at the close November had risen 14.4 cents to $3.193 and December was up 10.9 cents to $3.391. November crude oil shed 63 cents to $49.81/bbl.

“It looked like the market shrugged off a bearish report depending on how you look at it,” said Tom Saal, vice president at FCStone Latin America LLC. It was bearish because it was higher than the last several weeks, and it was higher than everyone expected. That made it really bearish, but the market shook it off and moved higher.

“I think one of the most bullish things about this market is its ability to stay above $3. If it stays above $3 in light of a shoulder month, that’s bullish, and it’s still been pretty warm around the country.

“The market needs to realize that these small injections are symptoms of a market that is tighter than what it has been the last couple of years. If you get some demand, it’s going to move it pretty good.”

Others see a similar dynamic. “This market remains surprisingly well supported with momentum tilted bullish in view of the market’s ability to easily absorb a bearish storage figure in yesterday’s trade,” said Jim Ritterbusch of Ritterbusch and Associates in a Friday morning note to clients.

“The 80 Bcf injection easily exceeded our expected 69 Bcf build in forcing a much smaller than expected narrowing in the supply surplus of only around 15 Bcf. A similar reduction in the surplus in next week’s data would appear likely as supply increases gravitate closer to seasonal tendencies at this late stage of the injection cycle. We see the weather factor skewed bearish for now, with temperatures generally expected to be unusually mild during the next couple of weeks.”

In the physical market, New England points fell hard on Friday as forecast temperatures gave no indication of heating or cooling load. Boston’s Friday high of 70 degrees was seen easing to 69 Saturday and 59 by Monday, five degrees below normal. Washington, DC’s Friday high of 71 was expected to slide to 70 Saturday before dropping to 64 Monday. The normal high in the nation’s capitol is 71 this time of year.

Most major market points were more resilient. Gas at the Chicago Citygate fell 2 cents to $2.88, and deliveries to the Henry Hub lost 3 cents to $2.96. Gas on Panhandle Eastern fell 8 cents to $2.70, and gas at the PG&E Citygate changed hands 6 cents lower at $3.36.

At 5 p.m. EDT Friday the National Hurricane Center (NHC) reported that Hurricane Matthew was 135 miles south of Savannah, Georgia and moving to the north at 12 mph. Maximum sustained winds were 110 mph. NHC projected that Matthew would continue to migrate up the east coast of Georgia and the Carolinas.

Forecaster WSI Corp. said, “Hurricane Matthew will continue scrape the Florida and Georgia coast [Friday] through Saturday morning with damaging winds, torrential rain, etc. During the weekend, Matthew will spin to the north-northeast just off the Carolina coast and brush these areas with gusty winds and heavy rain bands, while conditions will improve across Florida. This is a high-impact event, and widespread multi day-plus outages are likely, including places like Daytona Beach, Orlando, Jacksonville, Savannah, Charleston and Wilmington. Flooding is also a concern due to five- to 10-plus inches of rain and onshore wind.

“Matthew will likely get pushed to the east-southeast off the Southeast coast by a cold front by Monday and may drift back toward the northern Bahamas by Tuesday. The combination of a cold front and the flow around Matthew will drive high pressure into the majority of the South as the weekend progresses into the early next week. High temps will retreat into the upper 60s, 70s and 80s. Mins will dip into the upper 40s, 50s and 60s.”

For all its power Matthew was seen as having only a modest effect on power load. It continued to batter Florida’s east coast Friday, knocking out electricity to hundreds of thousands, resulting in a 0.5 Bcf/d drop in natural gas demand in the state, but the longer-term impact on natural gas facilities seemed slight (see related story).

Evacuations, business closings, and a resulting decline in power generation had overall natural gas consumption in Florida down about 0.5 Bcf/d Friday morning, according to Genscape Analyst Thomas Jennings.

“I think the seven-day [Florida gas demand] average prior to today was probably around 3.5-4.0 Bcf, and now it’s down to the low 3.0s,” Jennings told NGI. “That’s a pretty big dip, an unseasonable dip. Florida’s usually pretty steady when it comes to power demand, even through the shoulder season, it’s pretty robust.”

That lost demand should bounce back as residents return home in coming days, and with no reports of significant storm damage to natural gas facilities so far, Matthew is unlikely to have long-term negative effects on the industry, he said.

To the north, gas buyers for Friday and weekend power generation across PJM should be in good shape as temperatures are expected to be mild and wind generation ample. “High temps will drop into the upper 50s, 60s to low 70s, [and] mins will dip into the 40s and 50s. High pressure will promote fair weather and moderating temperatures by Tuesday. A south-southeast breeze to north-northwest wind behind a cold front will promote elevated wind generation today into early Saturday morning with output between 2-3 GW. Wind gen will subside and become light during the remainder of the weekend into early Monday,” WSI said.