It may have been a short four-day trading week, but that didn’t deter the weather bears from seizing full control and sending weekly natural gas quotes tumbling. 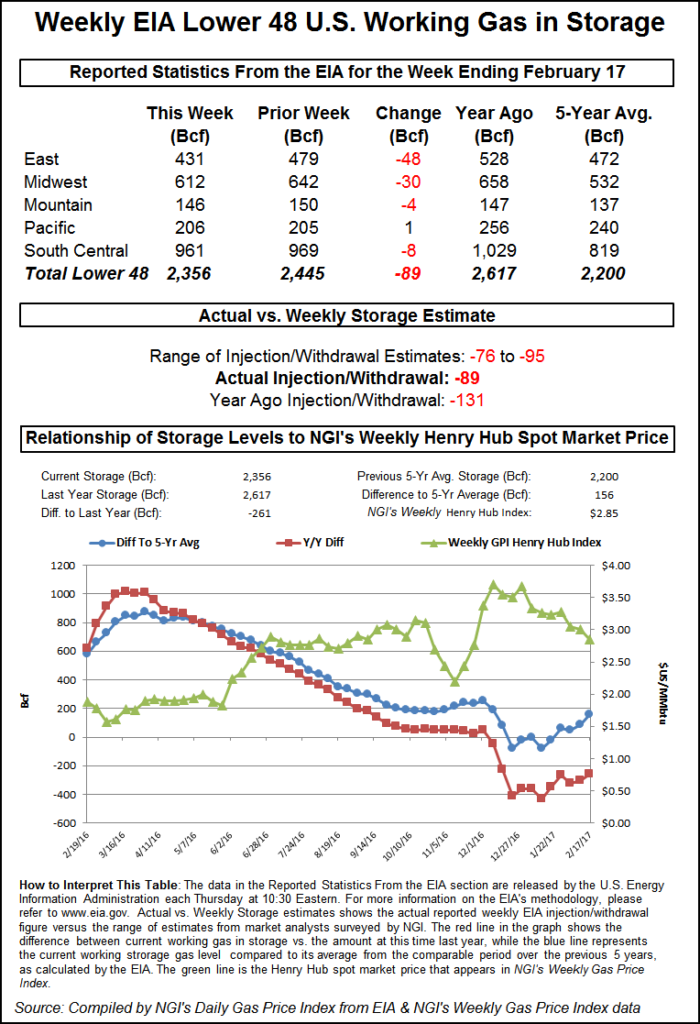 The signs of the week’s decline were on the wall Tuesday when traders returned from the President’s Day holiday and watched spot futures post a gut-wrenching 27-cent loss. The NGI National Weekly Spot Gas Price dropped 35 cents to $2.40, and every point followed by NGI fell deeply into the loss column.

Regionally the Northeast dropped the most losing 89 cents to average $2.36 and California proved the most resilient giving up 22 cents to $2.66.

Thursday the Energy Information Administration (EIA) storage report made its typical grand entrance at 10:30 a.m. EST, and although prices staged a modest rally, they failed to breach previous highs and lows already established. At the close, March had added 2.5 cents to $2.617 and April had gained 4.8 cents to $2.749. April crude oil rose 86 cents to $54.45/bbl.

The storage figures were something of a surprise as the withdrawal for the week ending Feb. 17 was greater than what the market was expecting. EIA reported an 89 Bcf withdrawal, about 4 Bcf greater than industry estimates. March futures on Thursday rose to $2.662, and by 10:45 a.m. March was trading at $2.651, up 5.9 cents from Wednesday’s settlement. March had established the session low in overnight trading at $2.569, and the session high at $2.704 before the release of the data.

Last year 131 Bcf was withdrawn during the same week, and the five-year pace is for a 158 Bcf pull.

“We were hearing an 88 Bcf withdrawal, but the action after the number came out was pretty uneventful,” a New York floor trader told NGI. “Things are so depressed in this market. Last week we were talking $3 holding, then $2.75, and now $2.50, and in the midst of winter.”

“The 89 Bcf figure was more than the consensus expectation for 81-85 Bcf in net withdrawals, and so supportive for prices,” said Tim Evans of Citi Futures Perspective. “At the same time, the draw was still well below the 158 Bcf five-year average, and so bearish on a seasonally adjusted basis, limiting the potential for price recovery.”

Inventories now stand at 2,356 Bcf and are 261 Bcf less than last year and 156 Bcf greater than the five-year average. In the East Region 48 Bcf was withdrawn and the Midwest Region saw inventories decrease by 30 Bcf. Stocks in the Mountain Region fell 4 Bcf, and the Pacific Region was up 1 Bcf. The South Central Region dropped 8 Bcf.

Wells Fargo analyst David Tameron called the report “slightly bullish [as] the 89 Bcf withdrawal was 8 Bcf above consensus, 28 Bcf below last year’s mark and 87 Bcf below the five-year average withdrawal of 176 Bcf.

“Through the first seven weeks of the year we’ve seen a cumulative withdrawal of 955 Bcf, well below last year’s 1,054 Bcf aggregate pull and the five-year average of 1,146 Bcf. Absolute storage levels are now 164 Bcf above the five-year average, as the smaller than normal cumulative withdrawal so far this year has more than erased the deficit created by a strong December.”

Randy Ollenberger with BMO Capital Markets said, “We believe the storage report will be viewed as slightly positive. Storage has dropped close to five-year average levels, and we believe that U.S. working gas in storage could trend toward five-year lows by the end of the 2017 summer injection season, assuming normal weather.”

By Friday weekend and Monday deals for physical natural gas were a tough sell, although some modest strength was seen at New England, Mid-Atlantic, and Appalachian points.

Losses of a few pennies were common, and the NGI National Spot Gas Average on Friday fell 4 cents to $2.37. Both the March and April contracts settled on a firm note, but traders see a 16-cent premium to the expired March contract as susceptible to weather-driven weakness.

“A February remarkable for its long stretches of mildness steamed onward Thursday, with more all-time records for the month continuing to tumble across wide stretches of the U.S.,” said Wunderground meteorologists Bob Henson and Jeff Masters. “The apex of the record-setting warmth expanded on Thursday from the Midwest into New York and New England.

“The polar jet stream and associated surface front that typically swings through the United States in late winter has been hovering close to the U.S.-Canada border, with intrusions of seasonally cold air into the central and eastern United States either absent or short-lived over the last few days. The air mass south of this boundary has been notably mild and humid, flowing northward after spending time atop sea-surface temperatures that are at record-warm levels for late February.”

Futures traders noted a nominal increase in heating load in the near term.

Weather models overnight produced some modest cold going forward. “With so many false alarms this winter, it has become increasingly difficult to believe in colder periods, but the unusual situation of two straight days of model demand gains has earned some credibility on this upcoming briefly colder spell,” said Matt Rogers, president of Commodity Weather Group, in a Friday morning report to clients.

“[Friday’s] forecast is also weaker with next week’s warmth at times for the Midwest, East and South, which gains some demand in addition to this now cold-sided Monday March 6 week. The more skillful European guidance managed to gain demand on both model cycles in the past 24 hours, but they still show warmer ensemble cluster subsets that offer risk to the outlook.”

Given the overall lack of winter weather, traders aren’t convinced the now spot April contract is likely to hold up.

“I could see us within the next week or so being closer to the $2.50 range than up here [$2.787]. There’s no reason for this market to up close to $3,” said a New York floor trader. “It’s currently 70 in New York City and all next week they are looking for temperatures in the 50s.

Analysts see any significant price moves contingent upon colder weather, and it appears that a late-season trend to more normal temperatures is unlikely to be sufficient.

“Some models are beginning to favor temperature normalization across many of the northern tier states,” said Jim Ritterbusch of Ritterbusch and Associates in a Friday morning report to clients. “But this is a market that will require broad-based below-normal weather outlooks if price advances of some 10-15 cents are to develop. This late stage of the heating cycle will also be reducing HDDs seasonally in reducing the impact of any cold temperature forecasts should they develop. As a result, we feel that any meaningful price increase will be heavily contingent upon an upswing in power demand and exports with the approach of the shoulder period.”

Gas buyers for power generation across the PJM footprint over the weekend were expected to have a healthy amount of wind generation to work with.

WSI Corp. in a Friday morning report said, “A vigorous storm system and its associated cold front will track across the power pool from west to east during the next two days with a round of rain and thunderstorms. Severe thunderstorms and/or a squall line with damaging winds will likely track into western PJM this evening into tonight. The rain and storm risk will shift into the Mid Atlantic during Saturday.

“An increasing south-to-northwest wind associated with low pressure will lead to a period of strong wind generation during the next two days. Another pulse of southwest winds will continue to support elevated wind gen during Sunday. Output is forecast to peak 4-6 GW.”