Weatherford International plc reported a big uptick in its North American operations during the third quarter, with revenue rising 12% sequentially, which bodes well for strength across other product service lines going forward, the CEO said Wednesday. 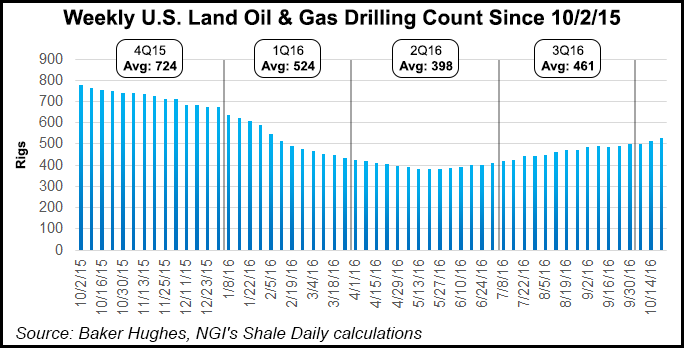 The Swiss-based company, whose main operations are housed in Houston, posted a $1.78 billion (minus $1.98/share) loss in the quarter, versus year-ago losses of $170 million (minus 22 cents). Nearly $1.4 billion of the losses resulted from writedowns on rigs and equipment. Revenue plunged almost 40% year/year to $2.24 billion, but it fell only about 3% sequentially, lifted by North America, where revenue climbed to $449 million, 12% higher than in 2Q2016.

“The worst of the historical downturn is behind us, and the market is slowly turning,” he told analysts. “This is the first step toward a recovery. Operators are exhibiting increased willingness to invest in production-oriented projects with oil prices at or just above $50/bbl.”

During the quarter Weatherford agreed to pay a $140 million penalty to settle U.S. charges that from 2007 to 2012 it inflated profits through fraudulent accounting practices (see Shale Daily, Sept. 27). The company has resolved its legal issues and plans to post gains as the industry recovers, the CEO said.

“The fourth quarter is the beginning in our view…But it’s not one quarter. It should be a methodical, organized, disciplined growth process.”

The last two months are going to pressure the company, which often has missed analyst forecasts. Weatherford management is attempting to improve its expectations for analysts and shareholders alike.

“We dread the notion of being wrong,” the CEO told analysts.

Weatherford should be free cash flow positive in the fourth quarter, CFO Krishna Shivram said. Customers, he noted, have been violating contracts and making late payments, which impacted 3Q2016 results.

“We’re very incensed about it,” Shivram said during the conference call. “We have never experienced this level of willful disregard.”

During the third quarter, Weatherford continued to lay off hundreds of people, which brought its nine-month total to at least 8,000, reducing its workforce to about 31,000 from 67,000-plus at the start of 2014.

The “leading market indicators” show a tightening global supply/demand balance, “and we anticipate these trends will steadily accelerate,” giving rise to increased spending by customers next year, Duroc-Danner said.

Echoing comments made during 3Q2016 conference calls by the top three global OFS operators Schlumberger Ltd., Halliburton Co. and Baker Hughes Inc., the CEO affirmed that “technology and service quality will drive our path forward. Operations is our entire focus. Through innovation, we are further integrating our product line disciplines, which will improve productivity and result in higher capital efficiency.”