Weatherford International plc’s missteps and wrong turns, financially and management-wise, turned investors away over the last few years, but the company has a renewed purpose as it locks on to opportunities ahead, the newly installed CEO said. 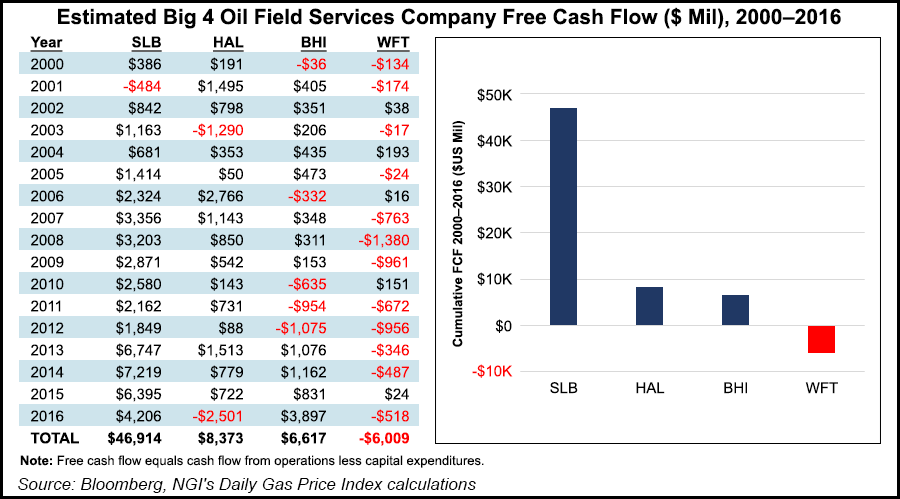 Mark McCollum, the former financial chief of Halliburton Co., was lured away earlier this year to take over at Weatherford, the fourth largest oilfield services (OFS) operator in the world. Founded in 1941 in the North Texas town for which it is named, the company has a rich history of innovation and service for global oil and gas operators.

However, the company turned left when it should have turned right at a few intersections, failing to meet guidance and suffering sharp financial losses, exacerbated by the 2014 oil price debacle.

McCollum last spring promised the start of a “new chapter.” During the recent second quarter conference call, he reiterated his belief that Weatherford is indeed still relevant. And he committed himself “to doing the heavy lifting to get things fixed.”

Job No. 1 is to strengthen the balance sheet, with a goal to cut net debt in half by the end of 2019.

“First, we intend to heighten our focus on the operational and financial accountability with a more disciplined and streamlined management process,” he said. “We’re currently carrying out a thorough and comprehensive evaluation of the way we operate, which varies greatly between different product lines and geographies with the goal of standardizing, simplifying and in some cases automating, key processes across the organization.”

Weatherford has teams reviewing everything, from customer service delivery, the supply chain and sales to back-office processes.

A “complete portfolio review” also is underway. “If we’re going to have it, it’s got to have a future,” said the CEO. “It’s got to make a return. My early discussions with customers in review of operations suggest to me that there is significant untapped opportunity to improve Weatherford’s market position and returns.”

Weatherford has the assets, workforce, global presence and collaborative customer relationships, he said.

“We just need a clear strategic vision for our portfolio, aligned with an organization designed to execute on that vision…My commitment is to get the composition and structure of this organization right.”

During the conference call, analysts were interested in how far McCollum was willing to go to turn around Weatherford’s fortunes. Would the company be willing to part with any of its “crown jewels,” an analyst asked.

“Coming in as a fresh face here, I’m agnostic,” McCollum said. “If you’ve been here for a long time, you know you probably have some emotional investment in some of the product lines, what might be a crown jewel, or not. My view is every product line is equal in the portfolio. It has an equal space, whether it’s large or small. And they all have to perform. They have to perform on their own merits. And so, what we’re trying to do is look at them very agnostically.”
Weatherford’s executive team had internal help but it now has turned to outside experts to evaluate what the company’s assets do best and their potential future.

McCollum also is trying to get a better sense of how to synthesize “this fairly disparate…group of product lines to bring them closer together…One of the issues that I see is all of our product lines run very independent from each other today. And while that might have been okay for a long period of time…customers all say they want solutions. We need solutions…

“I also think that in bringing them together, there are probably significant cost synergies to be had by leaning out the organization and how we run it both at the top of the organization, as well as down at the fuel interface.”

Analysts appeared to sense McCollum’s need to upend the organizational structure and reverse the company’s fortunes. “Your sense of urgency is obvious,” one analyst said, regarding McCollum’s stance on paying down debt. One issue for investors has been Weatherford’s “Achilles’ heel,” i.e., it’s high cash burn.

Breakeven cash flow is Weatherford’s commitment, CFO Christoph Bausch told analysts. However, there’s still a lot of noise in severance costs, related to massive layoffs and restructuring over the past few years.

To help cope with some of the costs, Weatherford is tying its fortunes to more joint ventures. In March it announced a game changing JV with Schlumberger Ltd., the OneStim partnership, to capitalize on the recovery in North American unconventional land.

Schlumberger is combining its 2 million hydraulic hp (hhp) with Weatherford’s 1 million hhp, creating the second largest fracturing fleet in North America after Halliburton. The deal is set to close by year’s end.
“My goal is be able to present a clear, strategic direction in the market early in the fourth quarter, so stay tuned,” McCollum said.

Reiterating his belief in the company’s future, the CEO said he has seen “an incredible amount of opportunity in this company, and in speaking with our customers, I see that they feel the same. They’re supportive of Weatherford, they just need us to be more aggressively focused on finding unique, internally collaborative solutions to the technical challenges they face, and to up our game when it comes to consistent execution in service quality.

“I’m sure the same could be said for all of our competitors, too.” However, as an organization, Weatherford has “admittedly been a bit disjointed at times,” said the CEO. “That ends now. We’re dedicating ourselves to moving forward to a stronger, more unified company that is guided by our core values.”
The key priority, he said, is to repair the balance sheet, then right the structure and operations to “be successful regardless of the market that we find ourselves in.”

“Pricing and utilization has improved in all product lines as operators increasingly drill wells with complex profiles and longer laterals,” McCollum said. “As operators continue to move deeper into the well lifecycle, we expect further improvement in our production-related businesses. In addition, with the spring break-up behind us, the Canadian rig count has come back quickly and is above last year’s levels.”

Besides revamping the operations, McCollum also wants to overcome a perception that Weatherford lacks the technology wizardry of its peers. It’s something he knows a bit about, having come from technology-trained Halliburton.

“I actually think that one of the things that’s been underappreciated about Weatherford is the level of technology that we have,” he said. “Obviously when you’re sitting in a competitor’s shoes, your goal is to sort of knock down everybody else’s tools in favor of your own, but I think admittedly I’ve always had an appreciation for the technologies that Weatherford had.

“So we’re driving hard on that, first of all, making sure that we are consistent and as a part of some of these initiatives that we’re working on.”

Weatherford plans to have more “consistent design of service across all of our product lines and geographies so that we can ensure better execution of the tools and really get maximum advantage for the technologies that we have.”

Customers have said they want “a more procedural, process-oriented and disciplined company, and there is strong confidence in our ability to further improve performance,” said the CEO. “Many customers have expressed their appreciation of Weatherford’s support and our ability to deploy a skilled team to solve their challenges. The level of encouragement I received from our customers leaves me confident that we have significant opportunities ahead of us.”

Even though oil and gas prices aren’t budging, Weatherford remains “cautiously optimistic” but the anticipated OFS recovery, beyond completions activity in key U.S. unconventional basins, “has been slow to develop,” McCollum said.

“We have seen a flattening in the North American rig count, which will make it more difficult, we believe, to obtain improved margins, in particular as certain input costs are likely to increase. On the other hand, with the spring break-up behind us, the Canadian rig count came back earlier than usual and is now above last year’s levels. And internationally, numerous recent contract awards coupled with the startup of new projects should allow us to outpace rig count growth.”

Given time, steady demand growth, combined with natural decline rates, “should offset U.S. supply surplus and improve the global market outlook, but I’m anticipating that this is a couple of years away,” McCollum said.

“It’d be great to get some wind at our backs in the form of a market recovery. However, we cannot and are not holding out for a macro-level change to strengthen our results.That doesn’t mean, though, that there aren’t plenty of things that we can do to improve our financial performance and position that are well within our control to execute.”