Weatherford International plc’s management team has been working for close to two years to extricate itself from a legacy jam, with a stumbling share price and debt issues looming, but CEO Mark McCollum is optimistic that the target to generate positive cash flow remains on track for year’s end. 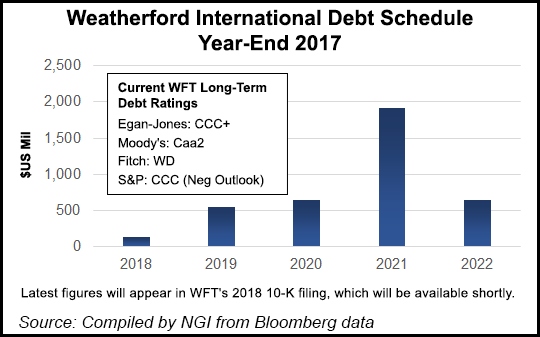 The Switzerland-based oilfield services giant has raised its 2019 capital budget slightly in one positive move allowing it to expand its touted technology-driven equipment and service offerings and its customer base.

However, improving investor confidence is key, McCollum acknowledged during the recent fourth quarter conference call. The New York Stock Exchange has warned of a delisting unless the stock price moves above $1.00. One analyst on the call asked McCollum to address the “elephant in the room,” about whether a capital restructuring or voluntary bankruptcy was in the cards.

“I’m going to be real honest,” McCollum said, “obviously we recognize that we have got these maturities that are out there” — term loans that are coming due into 2021. But as an “honest answer” he said, “I don’t waste a lot of time thinking or planning how to fail. Our energy as a team here is 100% focused on working to succeed the path forward for us, a path that we can control, the actions that we can take in continuing to execute the transformation plan and do that quarter in and quarter out…”

Management is working to improve profitability, which ultimately would drive the cash flow and improve credit metrics. At the same time, the company wants to continue to execute the quality and service expected in the field by introducing technologies and “addressing needs that our customers are saying ”we need Weatherford to be there to fulfill.’

“What we’re trying to do right now is to stay laser focused on transformation and execution operationally as well,” McCollum said. What the management team has accomplished to date is “really dramatic, but we have got an equally steep hill to climb in 2019, and that is where our energy is.”

In the coming months, Weatherford’s maturing loans with key lenders will be addressed, he said. “And in the context of those conversations, we will begin to look at solutions that will address those maturities.”

Weatherford is looking beyond “gravity issues,” or things outside of its control, McCollum said.

McCollum, who came aboard in 2017, did not create the overhanging issues, exacerbated by the 2014 downturn in oil prices. Weatherford’s recent quarters have swung to sharp financial losses. He entered a bit of a mess, taking over for long-time chief Bernard J. Duroc-Danner, who abruptly resigned after an investigation by the U.S. Securities and Exchange Commission found financial fraud for inflating earnings with deceptive income tax accounting. Weatherford was fined $140 million.

The “new chapter” McCollum promised has taken longer than many might have anticipated. But he said he’s not giving up.

The company-wide transformation plan is designed to improve financial performance by an incremental $1 billion by the end of the year. However, the rapid turnabout in oil prices during the fourth quarter was not good news.

The “most important” thing this year is to generate positive free cash flow (FCF), CFO Christoph Bausch said. Results are improving, and the company is focused on working capital, leveraged around investments, “which we can dial up or down as the market evolves.” The commitment “without really betting or promising” an earnings target is positive FCF.

Weatherford to date has achieved targeted annualized recurring transformation benefits of around $400 million, representing 40% of the total transformation target. It also decreased nonproductive time in 2018 by 22% year/year, exceeding the annual target and representing the fourth consecutive year of improvement.

The portfolio is better insulated now after selling off the pressure pumping business and some production-heavy revenue streams.

“Our ability to generate better than expected operating results and free cash flow is a testament to the progress we continue to make on our transformation plan and the positive structural changes we have made to our company over the past year,” McCollum said. “We achieved positive operating cash flow during the quarter and further enhanced our liquidity as we closed the first two tranches of our international land drilling rig sale.

“Our year-end liquidity position of over $900 million and the recent announcements regarding the divestiture of our laboratory services and surface data logging businesses will continue to improve our net debt position as we move through 2019, giving us sufficient liquidity to continue to execute on our strategic initiatives and pay down our near-term maturities.”

“Expectations for activity levels in the United States have seen the biggest shift since this time last quarter,” McCollum told analysts. “Consensus views are centering on the spending being flat-to-down in 2019 versus 2018 with the most negative impacts in terms of activity level and pricing declines related to the pressure pumping market and its associated subsectors.”

After exiting the competitive pressure pumping business, Weatherford is insulated from the subsectors. But it has upped the game in digitization, including with its ForeSite production optimization platforms, which harness asset data to maximize production.

“We expect relatively strong demand for our artificial services in 2019,” the CEO said. “Declining production on older shale wells will drive higher demand for our rod lift units including our Rotaflex long-stroke systems, which work better than legacy rod lift systems for wells with high flow rates.”

During the fourth quarter, Weatherford recorded pre-tax charges of $2 billion, primarily consisting of a $1.9 billion write-off of a significant portion of the goodwill balance. In addition, it recorded $79 million in impairments and asset writedowns, $36 million in restructuring and transformation charges, and $4 million in currency devaluation charges.