More sales in the Permian Basin and an increasingly positive outlook for international markets have given Weatherford International plc a “light wind at our back,” CEO Mark McCollum said last Friday. 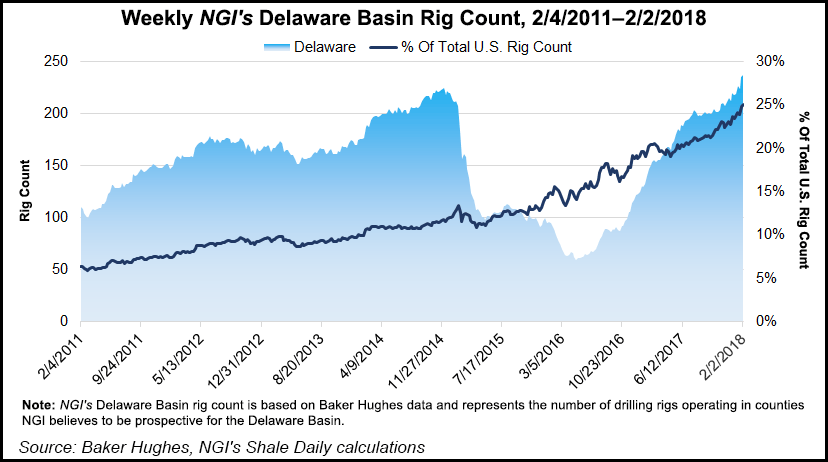 The multinational oilfield services (OFS) giant appears to need more support after issuing a mixed bag of results and big losses for the fourth quarter. McCollum, who came aboard last year after serving as CFO for Halliburton Co., has been working to rewrite the script for Weatherford, which has been beset by management turmoil and financial setbacks.

A plan was launched in November to cut $1 billion of costs over a two-year period and create a common set of objectives across the worldwide organization.

Accountability has been built into the “fabric” of the organization. Higher commodity prices have given the OFS sector more confidence about 2018, but Weatherford isn’t prepared to open the champagne yet.

Weatherford is “approaching 2018 still with some level of reservation,” McCollum said. “I think that the pricing that we see in the marketplace is good, it’s constructive, and we’re very encouraged by it, but I think that geopolitical concerns in areas like Venezuela and others continue to dampen some level of enthusiasm…”

In addition, there’s still some pricing pressure for the overall OFS sector.

“We’re still seeing…some of our competitors price under. I think that’s coming to an end as we absorb capacity, but pricing still may have a muted effect early. As we absorb all of our capacity, that’s going to stop…I think we’re fast approaching that point in time.”

What does look good is the “continued upward trend in rig count in activity in the United States and Canada,” led by the Permian’s Delaware sub-basin, he said.

Weatherford is becoming a smaller, more efficient player in the U.S. onshore, the CEO said. In late December, it sold its U.S. pressure pumping and pump-down perforating assets to Schlumberger Ltd. for $430 million, scrapping a touted plan the companies had initiated in early 2017 to joint venture through OneStim.

Not securing the No. 1 OFS operator as an onshore partner was a bit of a blow, as a business that was set to grow has instead been sold outright.

“Having now disposed of pressure pumping assets, our exposure to the market is a bit more muted,” McCollum said. Still, the “North America completions business for us is booming. We’re going to try to squeeze this thing out to capacity because we’re kind of sold out but we’re going to keep pressing that.”

In highlighting the technology gains for the quarter, one trend that is “especially strong” in the Permian is a shift in well design by customers to jet-lift and gas lift-systems from electric submersible pumps. Weatherford’s jet-lift and gas-lift systems may be installed without a rig, which reduces deferred production and operational costs.

In the United States, Weatherford is also gaining traction with its ForeSite production optimization platform, with installations in progress on 1,800 reciprocating-rod lift units. After installations are completed by mid-February, the production monitoring phase of the project is to begin.

In addition, Weatherford achieved a single-run drilling record in the Northeast using a suite of directional drilling technologies. The well design at the unnamed location included a 45-degree curve and an extended lateral of 13,571 feet.

“When I accepted this job last March, I knew there would be a lot of hard work ahead in order to seize the tremendous opportunity I’ve seen from the outside,” McCollum said. “We know that regardless of cyclical fluctuations in commodity prices, we must create our own success. Our potential far outpaces our recent results, and we’re determined to close that gap.”