Weatherford International plc, working overtime to overcome a string of poor quarterly performances, this year expects to generate cash flow well above forecasts after reining in costs and bringing in more cash than it spent in 2015 for the first time in five years. 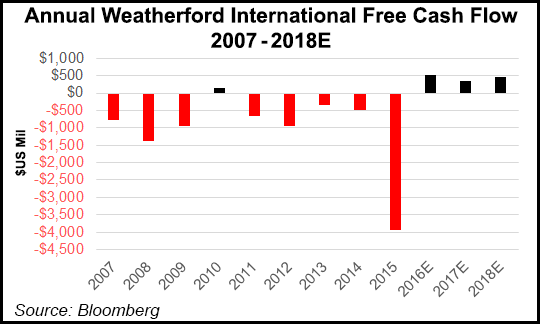 The Swiss-based oilfield services giant, No. 4 in the world, is forecasting free cash flow (FCF) of $600-700 million this year, well above Wall Street’s expectations that have average forecasts of about $495 million. The higher FCF is being generated by better efficiencies, fewer offices and increased layoffs, with another 6,000 people out the door by the end of the first half of this year. The job losses would bring the number of people let go by the company globally to about 20,000.

“We have geared the company, and will increasingly do so, for a prolonged period of very low activity,” CEO Bernard Duroc-Danner said during a conference call Thursday. “We are ready for as protracted a downcycle as markets will dictate.”

Specifically in North America last year, the driving factors were cost cuts, the CEO said. “We were early and we went deep and we didn’t pause. Year-end 2015 versus year-end 2014 we lowered our payroll and headcount by 41%. This first quarter we’re taking down another 15% of our U.S. headcount, meaning that from January 1, 2015 to date, or just about 15 months at the end of 1Q2016, we’ll have lowered our U.S. headcount and payroll by 50%.”

“We took down a support ratio from 59% in 2014 to where it presently stands at 38%,” Duroc-Danner said. “A 21% decline in support ratio is a colossal change in record time. To do this during a cyclical downturn is doubly difficult. There’s also a structural change that will provide us with outsized incremental margins through the recovery years. We’ll push down further our support ratio to 35%.”

Operations are being streamlined, with geographic segments consolidated. With the exception of research and development, which the CEO said could be caught up when the recovery begins, “we’re not cutting into muscle. We entered the depression with a large pool of excess equipment and heavy organizational structure. Much of what we’re doing is as much perennial efficiency transformation and volume-related direct cost adjustments. And we are continuously adding muscle by hydrating our talents.”

Weatherford is, in fact, still hiring and promoting people internally to strengthen its bench. “This year we’re hiring upwards of 500 new graduates from engineering schools around the world,” an ongoing commitment for “good and bad years. They are the future of the company.”

Last year a total of 126 facilities were closed and 25 more are scheduled to be shuttered by the end of March. Beyond the workforce reductions, the structure and culture of operations fundamentally changed, he said.

In the last three months of 2015 net losses rose to $1.2 billion (minus $1.54/share) from losses in the year-ago period of $475 million (minus 61 cents). Excluding one-time items, including price-related impairments, the company posted a 13 cent/share loss, better than Wall Street’s average forecast of 19 cents. In the past 10 years, Weatherford has missed analyst expectations 20 times and spent millions to correct accounting errors. Last September, it also dropped plans to raise $1 billion for an acquisition.

FCF from operations was $168 million in 4Q2015, the third consecutive quarter for positive FCF, and it was $129 million for the year, reflecting the focus on capital efficiencies. CFO Krishna Shivram said the company would be “marginally” FCF positive in the first quarter, which is usually a challenge, as “oil companies typically slow down payments to operating companies, to service companies and this year is no exception. And also you have…a lot of payment for the prior-year bonuses for employees and all the rest of it,” but “I do expect to be marginally cash flow positive in 1Q2016 and then building up as the year goes on.”

Management has come to face the “stark realities,” Duroc-Danner said. “We won’t pursue contracts that have punitive returns. We don’t have to, and we won’t. We’d rather let others do so.”

Even with the downturn, the energy industry remains “massively underfunded and massively underinvested,” he said. “It defies the imagination what is going on around the world…Yet if current oil pricing and oil selectivity endure, the industry will not be able to manage required oil demand as early as 2017…All this is a physical fact, even though it has no effect on the psychology of oil pricing and forward curve.”

But “it isn’t all bad…The present state of industry depression offers us great opportunities…We are using the brutal recession to fundamentally change our cost structure, quality, efficiency, returns culture and emphatically our talent bench. This is a unique opportunity for us to make a quantum change, keeping what is good and promising at Weatherford, but fundamentally changing what wasn’t.”