Natural gas prompt-month forward prices posted double-digit gains between May 27 and June 2 as strong cash, bullish storage and supportive weather amped up the market, according to NGI Forward Look. 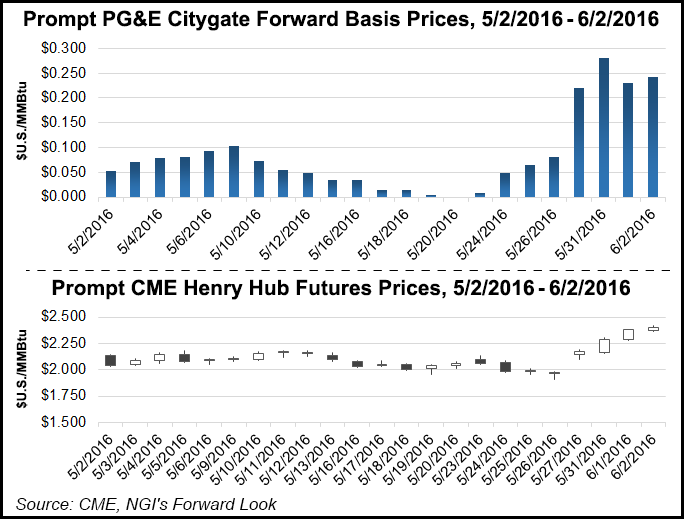 The Nymex July contract was up 24 cents, capping a four-day rally that appeared poised to slow in Friday trading as prices were generally flat at mid-day.

But the substantial gains made earlier in the week were duplicated across the front half of the curve, with the Nymex August contract picking up 20.5 cents and the balance of summer (August-October) climbing 18 cents.

The prompt winter was up a more modest 7 cents during that time.

Natural gas markets were closed May 30 in observance of Memorial Day.

At the forefront of the recent surge in prices are weather forecasts that have become more supportive for natural gas demand, particularly on the West Coast and soon, in Texas and the central and southern U.S.

While California, the Pacific Northwest and even the interior western United States saw record-setting temperatures this week, the mercury is set to rise once again in Texas and across the south after a swath of weather systems move out of the area over the weekend.

Highs in the 90s are expected to return to the Lone Star State beginning Tuesday, likely sending regional power burn above 31 Bcf/d, according to forecasters with NatGasWeather.

“It’s important to note the weather data is all over the place going into the second half of June, but we expect the southern and south-central U.S. to remain fairly warm/hot,” NatGasWeather said.

Indeed, overnight models turned even more bullish for natural gas demand, especially in the eight- to 11-day timeframe, according to Bespoke Weather Services.

“The previous concerns that June could be relatively cool have been alleviated, as models have determined that a breakdown of the positive PNA regime will allow cooler weather back into the Paciﬁc Northwest and accordingly, warmer weather across much of the Midwest into the South and Southeast,” Bespoke said.

“There remain questions around just how warm Texas will get, which should also cap upside, but a couple models show decent bullish risk there as well.”

The heat wave in the West and the loss of production from the downpours that occurred this week in Texas and the Southeast created enough of a stir to lift spot prices at several market hubs to 30-day highs this week, according to NGI Daily GPIdata.

Henry Hub spot prices put up double-digit gains both Tuesday and Wednesday, and forward markets followed suit with hefty increases of their own.

But the rally slowed Thursday as trading netted an increase in the July contract of only 2.4 cents despite a bullish storage report.

“We have clearly entered into overbought levels with such a continued rally in prices throughout the week, and that makes a reversal at some point today increasingly likely,” said Bespoke’s Jacob Meisel, chief meteorologist and co-founder.

Even with supportive weather forecasts and hampered production, Meisel said he still expects the July contract to face some resistance, which should cap any major continuation of the upward movement.

That is what analysts at Societe Generale are hoping as the recent strength in the July contract puts displacement at risk before the core of the summer season.

“We would rather see a return to our June price target of $2.20-2.30/MMBtu to ensure good tightening of fundamentals until core summer, when generation is less vulnerable to displacement, really starts,” said Societe Generale’s Breanne Dougherty. “We see better support to prices in July through September if tightening holds.”

Dougherty said storage will continue to weigh heavily on prices, especially as the surplus over year-ago levels and the five-year average remains at record levels.

The U.S. Energy Information Administration reported an 82 Bcf injection into storage for the week ending May 27, coming in slightly below the market consensus of 85 Bcf.

With inventories at 2,907 Bcf, stocks are 712 Bcf higher than this time last year and 753 Bcf above the five-year average.

She estimates the supply overhang will shrink below 650 Bcf by mid-June after starting off at more than 1 Tcf at the beginning of April.

“We do think the market is watching the year-on-year comparison most closely, so the sustained trend should keep some support in price, or at least eat away at downward pressure. That being said, there is still a lot of summer left, [and] we think it is still too early to have confidence that containment pressure at the end of the season will be entirely avoided,” Dougherty said.

Indeed, not all areas are expecting to experience summertime temperatures just yet.

A cold weather system is tracking through the Great Lakes and Mid-Atlantic with showers and thunderstorms along the cool front, which means light demand for heating or cooling, NatGasWeather said.

The Northeast will soon be in the storm track, which is likely to last through June 12-13, but with considerable uncertainty after, the agency said.

Genscape shows Appalachian demand sliding to 1.81 Bcf/d by June 10, down from the recent seven-day average of 2.12 Bcf/d, and then swinging by just a few Bcf/d in either direction through the middle of the month.

Genscape, based in Louisville, KY, is a real-time intelligence and data provider for energy and commodity markets.

The lack of significant cooling or heating demand was evident in Northeast forward prices as gains there were more subdued than other markets.

At New England’s Algonquin Gas Transmission citygates, July climbed just 10.3 cents between May 27 and June 2 to reach $2.75, according to Forward Look.