Natural gas futures strengthened for the third day in a row on Friday as fluctuating weather models left traders not wanting to get caught short ahead of the weekend. The January Nymex gas futures contract closed out the week at $6.245/MMBtu, up 28.3 cents on the day. February futures climbed 26.2 cents to $6.082. 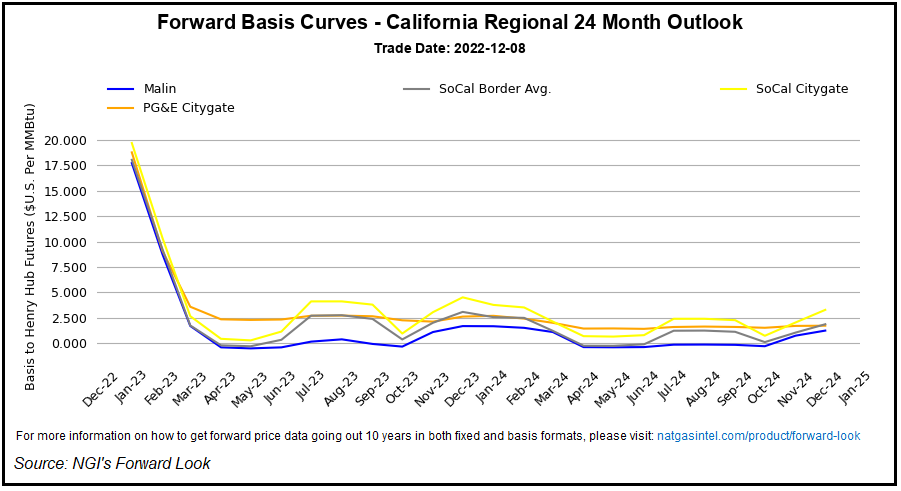 After what is expected to be an unusually warm first half of December, forecasts have shifted in a much more bullish direction in recent days. Both the Global Forecast System (GFS) and European Centre (EC) weather models trended much colder for the coming days, helping Nymex futures recoup a good chunk of the losses accumulated over the past couple of weeks.

On Friday, however, the data started to show signs that the coming pattern may not be as cold as initially forecast. The GFS overnight Thursday trended eight heating degree days (HDD) warmer for Dec. 16-22, but the EC trended seven HDDs colder.

The revisions kept the market on edge Friday, with prices hitting a $6.391 intraday high and then plunging down to a $5.794 intraday low.

Interestingly, futures rallied back even after the midday GFS data held the warmer trends. The model even removed a couple more HDDs from the 15-day outlook by not seeing quite as much cold air push into Western Canada and the northern United States, according to NatGasWeather. All considered, though, the GFS is still cold enough for Dec. 16-23, the forecaster said. “Although any warmer trends, and it won’t be for several of the days.”

Any deviation from the chilly late-December forecast would likely send prices lower heading into the end of the year. A warm start to the month already has lowered demand and taken prices sharply lower than they were weeks ago.

The latest government data showed the toll mild weather can take on inventories.

The Energy Information Administration (EIA) on Thursday said a modest 21 Bcf was withdrawn from storage stocks for the week ending Dec. 2, which was short of consensus estimates ahead of the report.

The draw also was light by historical comparisons and reflected a market that was more than 5 Bcf/d oversupplied, according to Tudor, Pickering, Holt & Co. (TPH).

Overall, total working gas of 3,462 Bcf is only 51 Bcf shy of year-ago levels and 58% below the five-year average, according to EIA.

Looking ahead to the next EIA report, the TPH team said it was modeling a withdrawal of 40 Bcf. This, too, would be looser than the five-year average draw of 93 Bcf/d. As such, deficits are set to shrink further and could flip to a surplus soon.

With the weather models still not in complete agreement about the upcoming cold snap, NatGasWeather said there is a risk that one of the major data sets could shift over the weekend. The EC’s Friday afternoon run trended three HDDs warmer for late next week, however, it was colder for Dec. 20-23. It added up to seven HDDs for this period, putting it nearly 15 HDDs colder than the GFS.

Overall, the EC is plenty cold enough Dec. 17-23 for a solid bullish interpretation, according to NatGasWeather. “The risk over the weekend is the EC reverts warmer to shed demand.”

However, if it doesn’t – or if it were to trend even colder – a large gap higher for prices could be expected.

This stat is often overlooked by the gas market, EBW said. However, on a combined basis, the North American storage deficit currently sits 131 Bcf below normal.

At the same time, sharply colder temperatures have boosted space heating demand north of the border. So far, though, exports to the United States have remained strong amid an ongoing boom in production.

After steady gains throughout the week, West Coast spot gas prices surged even higher on Friday as the region braced for a potent winter storm.

Pacific Gas & Electric Corp. (PG&E) was preparing crews to respond to potential power outages as its meteorologists, along with the National Weather Service forecasters, were monitoring a weather system heading toward the West Coast. The storm was expected to produce downpours, strong gusty winds and heavy mountain snow. Strong winds in the 40-50 mph range may be widespread, according to PG&E. Gusts in excess of 50-55 mph were possible for the northern areas, coastal strip north of Monterey, and across the northern San Joaquin and Sacramento valleys.

“We have a plan to respond to outages and have activated our company-wide Emergency Operations Center to more efficiently allocate crews, materials and other resources for restoration efforts across our service area,” PG&E said Friday. “Local PG&E operations emergency centers will also activate in impacted regions to provide efficient support to our customers.”

The spike in heating demand helped send PG&E Citygate spot gas prices as high as $55.00 for gas deliveries through Monday. Prices ultimately averaged $46.590, up $14.56 on the day.

Little relief is in sight. PG&E Citygate balance of the month traded at $75.00 on Friday.

El Paso Natural Gas Co. (EPNG) on Thursday declared a force majeure because of an issue on Line 1100 downstream of the El Paso D Compressor Station (El Paso CS). As a result, EPNG limited the operational capacity of El Paso CS to 924 MMcf/d from Friday to Monday (Dec. 9-12), resulting in a day/day cut in scheduled capacity of 185 MMcf/d, according to Wood Mackenzie.