Natural gas futures slipped a little, and then a lot, midweek as the generally warm outlook through the middle of December remained intact. The January Nymex contract settled Wednesday at $2.780, down 10.0 cents from Tuesday’s close. February fell 9.0 cents to $2.778. 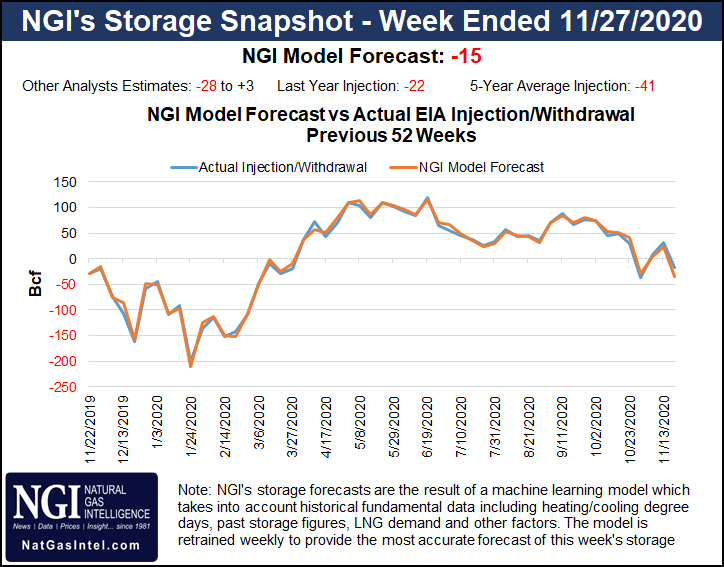 Spot gas prices were mixed Wednesday, with some cold lingering in parts of the country. NGI’s Spot Gas National Avg. was down 4.5 cents to $2.705.

After one of the warmest Novembers on record, December got off to a chilly start, even if it is expected to be brief. Temperatures as far south as Texas dipped into the 20s, bolstering heating demand during the second month of the gas market’s winter season.

Temperatures are likely to remain cold enough the next few nights over the Rockies and Plains as well, according to NatGasWeather, but warmer air was set to move back across the East before another cold front moves through this weekend. The rest of the United States is expected to be “exceptionally comfortable” by early December standards, the forecaster said, essentially leaving the pattern for Dec. 4-12 not as cold as needed to move prices higher.

Bespoke Weather Services said Wednesday morning there is potential for some stronger cold toward the middle of the month, at least in the central part of the country. The issue, the firm said, has been that any truly colder look has not progressed forward in the forecast, so far.

“We do favor the colder risks at mid-month, with the issue being duration,” Bespoke chief meteorologist Brian Lovern said.

The forecaster said he would not be surprised to see things turn back warmer late in the month, but also noted that “11- to 15-day maps could shift more bullish over the next few days first.”

January Nymex futures traded slightly in the red for most of the morning as traders couldn’t ignore the balmy December outlook even as other fundamentals remained supportive. However, losses deepened after the midday weather data trended milder with the pattern for Dec. 13-16. NatGasWeather said the latest Global Forecast System model still brought cooler air into the Lower 48 Dec. 12-16, but “it’s just the amount of cold and how it was to spread across the U.S. wasn’t as aggressive/impressive this run for what is likely to be viewed as a bearish trend.”

The prompt Nymex contract went on to plunge to an intraday low of $2.743 before ultimately settling a few cents above that level.

Without much sustained cold in the forecast, Thursday’s government storage data could move the needle even more. The Energy Information Administration’s (EIA) weekly storage inventory report, scheduled for 10:30 a.m., covers the week ending Nov. 27, including the Thanksgiving holiday. This alone makes estimating the storage change a bit tricky, but throw in a pandemic and global demand factors and it’s no wonder the range of expectations ahead of the report was wider than usual.

A Bloomberg survey of six analysts produced a range from a 26 Bcf withdrawal to a 1 Bcf injection, with a median draw of 19 Bcf. Reuters polled 16 analysts, whose withdrawal estimates were as low as 28 Bcf and injection estimates were as high as 3 Bcf, with a median decrease of 12 Bcf. A Wall Street Journal poll of 12 analysts showed draws ranging from 8-28 Bcf. NGI projected a 15 Bcf pull.

Though liquefied natural gas demand remains very supportive at near-record levels, bears have started to creep back into the market.

Mobius Risk Group pointed out that Commodities Futures Trading Commission data on Nov. 24 showed the speculative community had reduced its net length by roughly 35,000 lots. This was, however, still 150,000 lots longer than it was at the same point last year.

“If we approach the Christmas holidays and the end of the year without either stable temperatures near normal, or a few bursts of cold air reaching the Lower 48, there is a risk that more positions will be trimmed,” Houston-based Mobius said.

Conversely, if either of those materialize, the front of the curve has the capacity to move sharply higher, according to the firm. This could be done even without a material change in net length by moving length from summer 2021 to 1Q2020 or from some other longer dated tenor.

Tudor, Pickering, Holt & Co., (TPH) also noted how quickly sentiment has turned on the gas space. As recently as a month ago, there was “nary a bear to be found,” according to the firm. But, following a soft start to winter and a ramp in production, bulls are now few and far between, with most investors content to wait until the second half of 2021 before re-evaluating a long position, it said.

The recent production increase was “universally admonished,” according to TPH, as the move to 91 Bcf/d not only took steam out of the winter trade and 2021 outlook but, more structurally, increased skepticism that producers would stick to a no-growth strategy.

TPH said its clients generally view U.S. LNG utilization as the “X-factor” for 2021, with the European storage trajectory through the first quarter effectively serving as a leading indicator on U.S. utilization through October. “Despite the bearish slant, investors still agree with our view of a strong fundamental setup into 2022, but with the bull pitch being predicated on limiting supply growth, skepticism is on the rise and producers will need to reassure the market on a strong commitment to maintenance as we move through 2021.”

Spot gas prices were mixed Wednesday as one of the two weather systems circulating through the United States was set to exit the East Coast. A second cold shot was forecast to push into the interior West and central United States/Plains the next few days, but most areas are expected to see temperatures warm back above normal this weekend, according to NatGasWeather. The comfortable weather pattern was seen lasting into next week, besides some slightly cooler air in the Southeast and Mid-Atlantic Coast.

On the West Coast, prices moved higher midweek as California wildfires remained front and center. AccuWeather said atmospheric pressure is expected to build across the interior western United States, and a strong jet stream is to bend southward over the Southwestern states and northern Mexico. This sets the stage for a round of strong northeasterly winds in Southern California, known as Santa Ana winds.

This setup may create a flow of air from the interior West to the Pacific Ocean around Southern California, according to AccWeather. Meanwhile, the presence of a strong jet stream overhead could add another layer of intensity to the winds in this case. Peak winds and the strongest gusts are expected to occur on Thursday but overall troublesome winds may persist into Saturday.

Northern California utility Pacific Gas & Electric Co. warned of possible power shutoffs in Kern County in order to help prevent wildfires. Tens of thousands of utility customers in Southern California had their power turned off around the Thanksgiving holiday as a precaution.

Upstream in the Permian Basin, Waha cash slipped 1.5 cents to $2.615, a trend that spread across much of Texas. Agua Dulce next-day gas slid 1.5 cents to $2.810. Interestingly, the South Texas hub also recorded the most volumes traded in the region on Wednesday, NGI data showed. Agua Dulce liquidity has risen as exports to Mexico have increased.

Gains were seen across the Midwest and Midcontinent, but in South Louisiana, benchmark Henry Hub tumbled 10.5 cents to $2.700.