Warm weather outlooks kept a firm grip on the front of the natural gas forward curve for the Feb. 6-11 period, while a projected softening in Lower 48 production growth provided a modest uplift to winter 2020-21 prices, according to NGI’s Forward Look. 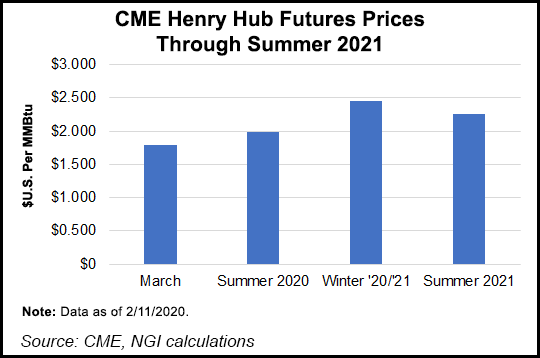 The “blow to the market” of seeing yet another potential cold forecast smashed is likely to prevent any optimism from building, according to EBW Analytics Group. Since November, bullish forecasts within the eight- to 15-day window repeatedly have turned warmer, and the gas market may have learned to broadly ignore cold signals until they roll forward into the one to 10-day window, the firm said. As a result, “any longer-term bullish forecasts pose less of a risk to bears, and may drive increased shorting of natural gas.”

The latest weather models are starting to hint that at least some cold weather could return by the end of February. The European weather model added demand both in its overnight run Tuesday and again Wednesday afternoon, according to Bespoke Weather Services. And although some demand was shed on Thursday, the outlook remained chillier than it had been over the weekend.

“We are getting more variability now with occasional colder shots, but the pattern as a whole still lacks significant cold,” Bespoke said. “Our sentiment is neutral, as it is unclear whether or not this variability is enough to allow the market to advance higher In the near term.”

As winter weather has largely fallen short of expectations, “any subsequent bullish weather will be too little, too late,” EBW said. The firm said any continued warmth would accelerate seasonal declines in weather-driven demand and further boost storage surpluses. Estimates are pointing to end-of-March inventories reaching 1.80 Tcf or more, which compares to the 1.1 Tcf that sat in storage on March 29, 2019, according to the Energy Information Administration (EIA.)

Meanwhile, fears over liquefied natural gas (LNG) export viability in a weak global natural gas market also is likely to put pressure on Nymex futures, EBW said. As an exporter, U.S. domestic prices need to be sufficiently below international benchmarks to keep LNG exports flowing, or demand for U.S. products may crater, according to the firm.

With the Title Transfer Facility hub in Europe at $2.75/MMBtu and falling, any recovery in Nymex futures “is likely to be shallower than fundamentals may otherwise suggest, with any recovery above $2.00/MMBtu unlikely before summer.”

That’s not to say there isn’t at least some hope for the natural gas market. Producer earnings calls have yet to get into full swing, and the low price environment has prompted some analysts to lower their projections for production growth this year.

In its Short-Term Energy Outlook (STEO) released Tuesday, the EIA said that monthly gas production, which reached a record high 92.1 Bcf/d in 2019, is expected to decline generally throughout 2020, falling from an estimated 95.4 Bcf/d in January to 92.5 Bcf/d in December. The falling production will be experienced primarily in the Appalachian and Permian basins, EIA said.

Forward markets across the United States moved rather uniformly with Nymex futures, with small losses of less than a dime seen through the summer and modest gains for next winter.

Midcontinent declines rounded out the lower end of declines as a series of winter storms elevated demand both last week and again this week, prompting some regional pipelines to declare limitations on their systems.

Meanwhile, price movements throughout the Rockies closely aligned with Nymex futures despite the barrage of winter storms that has hit the region this winter.

The weakness in Rockies prices in the face of harsh winter weather could be attributed to healthy storage inventories in the region. Jackson Prairie storage volumes have consistently been above five-year norms throughout 2020 so far, according to Genscape Inc.

Last year, the storage facility filled to capacity at the end of September, and inventories have dropped 5.5 Bcf, from 22.7 Bcf to 17.2 Bcf, since the beginning of 2020, the firm said. The largest net withdrawal in the past 30 days was on Feb. 4, with the second largest happening on Feb. 3, for a combined total withdrawal of nearly 1.6 Bcf across the two-day period.

“Historically, the switch from withdrawals to injections begins for Jackson Prairie in early to mid-March, one month from now,” Genscape natural gas analyst Matthew McDowell said.

Genscape meteorologists are forecasting normal levels of heating degree days throughout the Pacific Northwest this week, but the forecast for next week suggests warmer-than-average temperatures throughout the region. “If warmer weather persists for a notable amount of time through early March, Jackson Prairie could begin its injection season with reservoirs set to mirror 2019’s trend of remaining nearly full for the majority of the year,” McDowell said.