Physical natural gas for Friday delivery overall declined 4 cents as most traders elected to get their deals done prior to the release of often volatility-inducing storage figures. 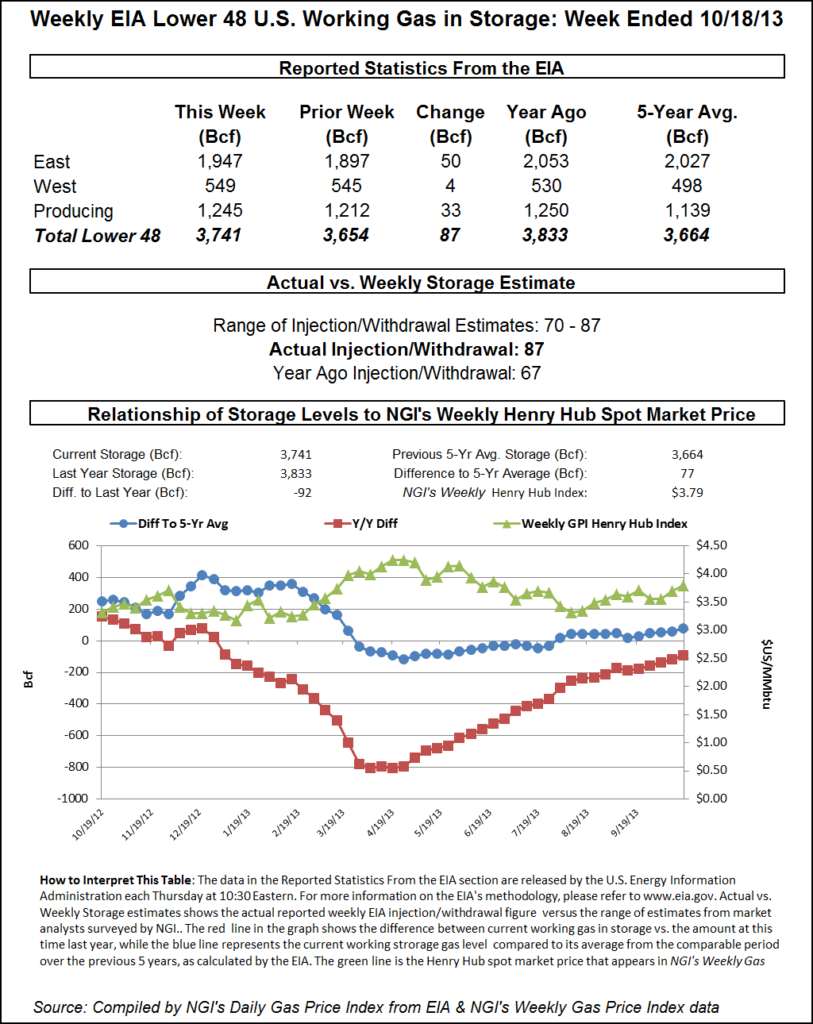 Weakness was widespread, with most points down a few pennies to a nickel. New England points were particularly weak as soft power prices did not encourage strong gas bids. Upper Great Lakes and California were both down about a nickel. The Energy Information Administration (EIA) reported a build of 87 Bcf, and November futures promptly put in the low of the day before staging a modest advance. At the close November was higher by 1.0 cents to $3.629 and December gained 1.0 cents as well to $3.743. December crude oil added 25 cents to $97.11/bbl.

Great Lakes buyers reported having to make modest purchases before considering their bidweek strategies. “We paid $3.93 and $3.88 for gas on Consumers. It’s getting close to the end of the month and we want to make sure our customers’ accounts are balanced given that we have colder weather right now,” said a Michigan buyer.

The buyer thought that the weather outlook might be somewhat warmer for November but said their initial figures indicated an aggressive bidweek posture. “The purchase has not yet been made so a change could be forthcoming,” he said.

Futures traders were treated to their second dose of storage data within a week. Tuesday’s report for the week ended Oct. 11 showed a build of 77 Bcf, and Thursday’s report was expected to show a slightly higher build. Tim Evans of Citi Futures Perspective calculated an 80 Bcf increase, and Kyle Cooper of IAF Advisors was looking for a build of 82 Bcf. A Reuters survey of 23 traders and analysts revealed a sample mean of 79 Bcf with a range of 70 Bcf to 87 Bcf. Bentek Energy’s flow model came as close as anyone and predicted a hefty build of 86 Bcf.

Bentek said that stout production estimates prompted its higher build. “Supply disruptions from the previous two-weeks did not roll into the current storage week, with production averaging 65.4 Bcf/d, the highest average since the July 26 storage week and 1.2 Bcf/d above the average of the previous three weeks.”

Analysts correctly predicted that risk to the consensus estimates would play out to the high side. In its weekly survey of market pundits,Energy Metro Desk expected an 83 Bcf increase, and John Sodergreen, editor, said “We see risk to the upside this week; anything between 83 and 87 Bcf should be right on the money. We note that one of our key indicators for an EIA surprise is just a whisper away from calling it. The spread between the three categories we track [financial institutions, individuals, and newswire surveys] came in this week at 2.8 Bcf, and we need a 3.0 Bcf spread to call it a proper surprise. So were EIA to come in at 85-87, it would be a modest surprise, and the bias would be right.”

Longer-term weather forecasts are in a state of flux, more so than usual. In its Thursday morning six- to 10-day outlook WSI Corp. of Andover, MA, said, “Temperatures have warmed over the Rockies and Southern Plains early in the period as the models are now slowing down the propagation of a sharp cold front a bit longer than what was originally anticipated.”

WSI said it has less than normal confidence in the forecast and admits that “The forecast could go either way here and is completely dependent on the mean progression and evolution of a digging cold trough over the Rockies early in the period. If the trough breaks and develops a cut-off low pressure system, temperatures could run warmer than forecast across the central and eastern U.S. as advertised by the deterministic models. But the ensembles continue to advise less of a risk of a cut-off to develop, and thus are promoting colder temperatures across the central and eastern U.S.”